Police now have this character in full custody. 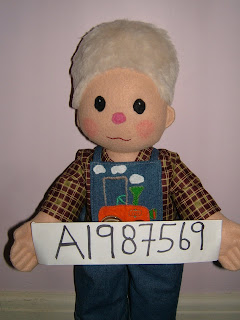 He was caught at 3am this morning trying to drive a snow plough the wrong way up the motorway! 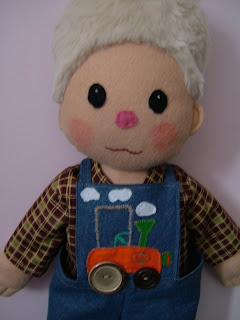 He refused to give his name but goes under the alias of Tractor Man. When questioned he said he was trying to get to his friend "Sweet Cheeks" but he didn't know his address as he had just recently moved. When asked why he had taken a snow plough he said he was used to driving tractors and thought that the controls would be the same. 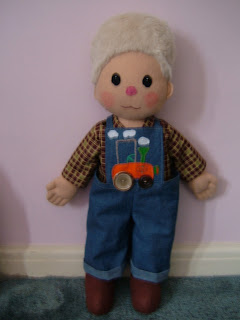 He is really gorgeous. :-) Thanks for making me smile.
A x

this is fab Mrs A...and a funny story too...I see where Faye gets it from!!

Ah but look at that sweet innocent face and rosy cheeks - he'll be let off with a caution surely!

Such a cute doll - I hope he finds Sweet Cheeks soon and I'm sure they'll be very happy together.

*smiling* What a delightful creation, Mrs. A. He is adorable and so perfectly made! The jeans look gorgeous - perfect overalls for a tractor guy - the button wheels are very clever - love it! You are amazing! I love these dolls.

Aww - what a sweetheart. I think we should have a whip round and spring him from jail immediately. Love the pink cheeks and the little mouth.

If that isn't an innocent expression...

What a handsome chappie! Will post your prize out tomorrow love Annie xx