You can't take it with you!

The Internet has been up and down all week with  the bad winds. Hopefully I can stay on long enough to be able to post this and get round everyones blogs. This item is rather appropriate at the moment as I'm stlill coughing (coffin) like mad and haven't been to bed in over a week as everytime I lay down I go into a coughing frenzy! Actually it has been quite comfy sitting up in an armchair especially as 'The Doc' has been covering me up like a parrot each night!
Anyway onto the post details. I entered a tag swap last month and didn't really think anything was amiss  when my return tag did not show up as I had received a plausable excuse for it being late. The swap owner then emailed me to say that my partner was a known flaker as she had flaked on her too  (and someone else) with a swap the month before. As I was missing a tag' Tee very kindly offered to send me a replacement (the tags are making up a set of 12 ,one for each month of 2012). The swap that Tee was missing was to alter a little coffin box and fill with goodies. I have now heard from Tee that she has received her coffin so here it is. ﻿ 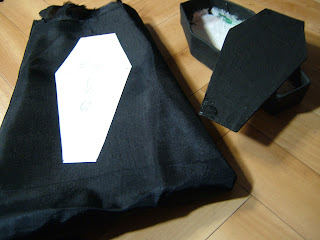 Now not having a coffin shaped box was not going to put me off so having been told the rough size of 6" x 3" I set to with cardboard ,glue, paper serviettes, material and black paint and got started. The original swap had been for halloween but as this was now long gone I  decided to put googly eyes on the inside of the lid just to keep an eye on things!﻿ 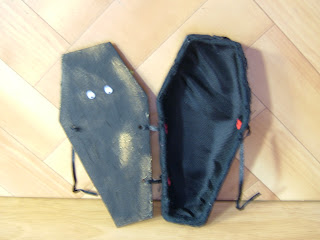 ﻿
The inside was lined with black satin and I attached the lid(after much debating) with ribbon hinges and ties. The lid is decorated with handmade roses and buffed with a little Inka Gold(I love this stuff).I then stitched lace and ribbon around the outside edge. 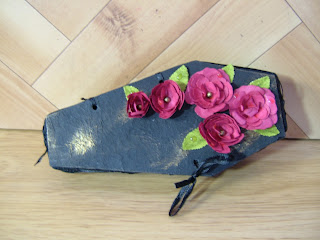 The inside is filled with beads,shinny baubles, trinkets, stick pins , more roses and even  some butterflies, so who says "You can't take it with you" !!!!﻿ 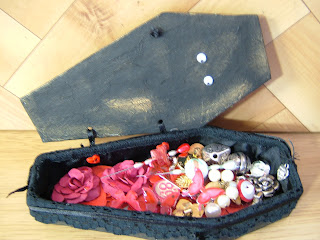 ﻿
﻿
Everything has come from my stash so I'm popping over to
Pixies crafty workshop: Use your snippets #47
Also the following challenges:
Craft your  Passion: Scraps.
Make it Monday:  Papercrafts.
Oldie But a Goodie: Anything but Christmas.
Tuesday Alchemy: Anything but a card.
Anthing but a Card: A stitch in time.
﻿
Posted by Mrs A. at 19:17 23 comments:

I  recently entered an Australian swap which was to send two pink cards to your partner. This is the second of the cards. The first card is down below (no pun intended) in the last post. These cards are now with my partner so I can showcase them. ﻿ 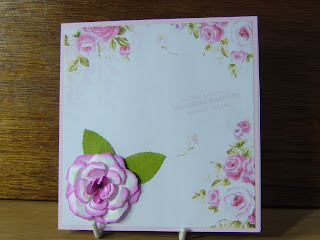 The backing paper is called Rasberry Road and I have adhered it to pink card stock.
Whilst having a rummage in my stash I found this rose that I had made for 'The Wedding' which had been a  reject due to being the wrong colour. However it matched this paper perfectly so I just had to use it. The flower had originally been made using the Spellbinders
Rose Creations die .
﻿ 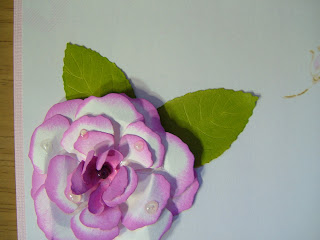 ﻿
I felt the card needed no other embellishments, not even a sentiment so I left it at that.

Would like to enter the following challenges:
Simply Create Too. Use your stash.(Used handmade rose from my stash)
Crafty Catz: Anything Goes.
Craft Your Passion: Clean and Simple.
Technique Tuesday: Punched Elements. (Die cut  Rose).
Challenges 4 Everybody: Anything Goes.
Dream Valley: Anything Goes.
Make it Monday Party: Paper Crafts.
Pixie's Crafty Workshop: Use your snippets (rose made from snippets of craft card).

This is  a card that I made for a recent swap. The swap required two pink cards you can see the second card up above  where I will be posting it shortly. I wanted to make a shabby chic style card with stitching. The stamp is a favourite of mine by 'Crafty Individuals'. I have layered up various backing papers by glueing to cardboard and then distressing the edges and hand stitiching a border. My blogging friend Sherry will be so proud of me as I managed to leave all the threads dangling!!! The butterfly is made with a punch that I snuck from Fluff (but had to give it back) so don't know who it is by. This is one of the last in my stash.
﻿ 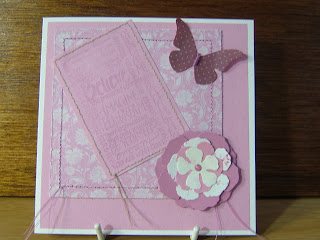 The flower is made using my Spellbinders Rose Creations die but instead of sculpting the petals I have left them flat. (When you cut with this die you get left with the centres from the petals which I keep in a lttle tin.) Here I have layered up with snippets of different backing papers  and instead of using a brad for the centre have used one of the circles from the plain petals to cover up the hole. A spot of glossy accents on top  and you have home made candi! 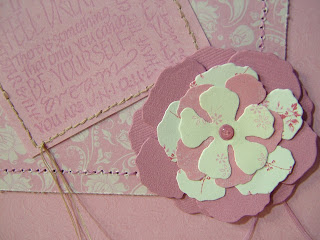 Of the Flower variety. Now what were you  thinking!!
Fluff asked me some time ago to make her some dinner plate size flowers for her new craft room walls. They are now in situ so I can show you. Colours asked for were pink, cream and mauve so I have alternated them around on each flower.  The large petals are made from coloured craft stock with matching petals of gradiating size in tissue paper and edged with satin ribbon which has been frilled. 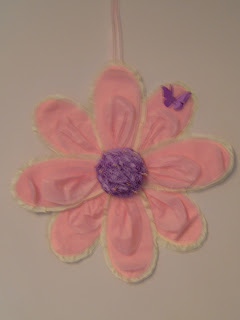 The centres are made from half a polystyrene ball each. I have then pinned and glued over 100 small 1" flower shapes (punched from tissue paper, with 4 layers each) into the ball completly covering it. The pink flower above has a die cut butterfly adhered to a petal and the one below has two smaller ones made from  shrink plastic .  Photos are the best I could get with the light available. They look better in real life.﻿ 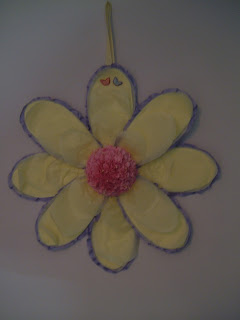 Would like to enter into  the following:
Crazy 4 challenges: Anything but a card.
Hiding in My Craft Room: 3 favourite colours (pink, cream, mauve).
Pixie's Crafty Workshop: Crafty snippets of shrink plastic and cardstock on the butterflies).
The Crafty Pad Designs: Anything goes.
Handmade Harbour: Handmade Mondays.
Make it Monday Party: Paper craft creations.
Flutterby Wednesday: Open with butterfly or fairy.
Simply Create: Link up your digital or paper creations.
Crafty Catz: Add texture to your project.
﻿
﻿
Posted by Mrs A. at 01:30 32 comments:

Isn't it always the  way. You wait ages for a bus and then two come along together!!
I had to post this straight away as it follows on from the post below.  So I finished the book album at 2am but still needed two Birthday cards PDQ.  I was sitting at my craft desk staring at the blank wall trying desperately to get inspiration (only it wasn't a blank wall it has my oil paintings that 'The Doc' had hung up for me) when suddenly eureka  I had a light bulb moment! Why not take a photo of one of my pictures, scan it into the computer, resize it, twiddle around with it and make Dad's card. So I did and here it is PDQ!!
﻿ 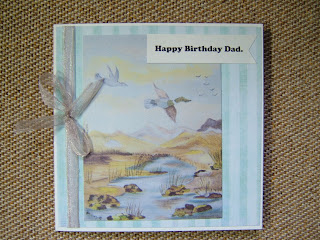 Backing paper and ribbon from my stash. Picture from stash on wall!
Card for Mum was a quick one too as I had all the elements cut out on my desk  already
and just had to decoupage it together.
Would like to enter this card into the following:
Pixie's Crafty Workshop: Snippets #44
Pile it On: For the Birthday Boy.
Lexi's Creations: Special Birthday.
Penny's Paper-crafty: Birthdays
Creative Inspitations: Lets celebrate.
Simply Create: Anything goes.
Crafty Catz:  Male card.
Totally Gorjuss: Things with wings.
﻿