I was in poundland last month
and spotted these snowflake window stickers.
Not to put on the windows much to The Doc's relief
but I thought they would look super on cards.

What do you think?

They came 4 in a packet and simply peeled off
the Acetate sheet they were on. 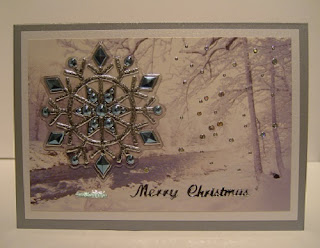 I found this christmas card front  not in my stash pile
but in a box of white paper off cuts that I use up
when stamping out images to colour.
When I turned the card over I saw this winter scene
and thought how well it would go with one of the snowflakes.
I simply trimmed the card front down slightly mounted onto
shimmery white card and then in turn onto a pearlescent silver grey base
made from card stock.  A silver sticker sentiment and some silver
circles left over from another peel off that looked like falling snow
and the card was complete..
Entering into the following challenges:
Craft Your Passion #292 Anything goes.
Crafty Card Makers #154 Snow
Tuesday Taggers #  snow, Snowfalkes/ or winter whites.
Shopping Our Stash #231 Let It Snow.
Fan-Tastic Tuesday #116 Anything goes with a twist make it sparkle.
Glitter  'n' Sparkle #167 Traditional or non Traditional.
Unicorn challenge #4 Winter time.
Crafty Calendar # Let It Snow.
Crafting Musketeers #32 Use a sentiment.
Pixie's Crafty Workshop #207 Use your snippets.

Two off the snowflakes were quite large
so I felt they didn't need much else on the card.
I  layeredthis one up with snippets of white shimmer card
navy pearlescent  and light blue card stock  for the base
which matched the blue stone effects in the snowflake.
They look like gems but are in fact just part of the plastic design.
They look authentic though. 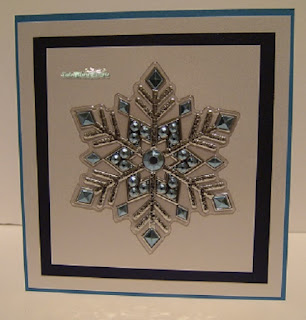 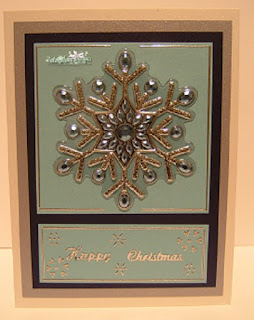 This was the other large snowflake which
I made into a  7.5 x 5.5 card.
I used turquoise card stock  layering up as before
and then  trimmed with silver edging strips and
left over bits of silver stickers  that  I placed into
snowflake patterns.  Waste not want not!
silver sentiment sticker to complete. 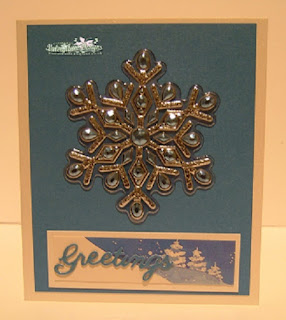 I found this snippet of a snow scene in my
used card stash and as it conveniently  matched
the blue card stock that I had left over decided to
pop it on the card as well!
The Greetings was cut out using a Britania die
layered up twice and then given a coating of
glossy accents  and when dry glued in place.
4 cards for a pound can't be bad.
Posted by Mrs A. at 08:00

These are beautiful Valery Anne ! Love that snowflake ! Hugs, blessings and love from Catherine

They look beautiful Valery Anne and I can just imagine how dimensional they feel irl.

Wow they look fabulous! Love the gorgeous scene on the 1st one too
Lucy x

Well done and well spotted, Mrs A, ain't it grand when things come together so well like that :)

And a very big thank you for your luffly Christmas card which arrived safely Downunder too ..l
really appreciate it - have a wonderful Christmas, if I am not over before next week, it is now less than a week away!!! Eeek, gotta get organised soon. :D
Hugs and God bless your kind heart Mrs A.
Shaz in Oz.x

These are lovely Mrs A and look so dimensional. Thank you for the lovely scenic card which just arrived this morning. Carol x

these cards do look wonderful Valery - what a clever way to use the stickers! Big hugs rachel x

Wow, these snowflakes are fabulous and so festive on your cards!! What a great idea (and finding!).
Lia xx

Wonderful cards and great idea to use those snowflakes, especially love that blue one xx

Wow, these snowflakes stickers are wonderful, they really seems full of gems! You have make so well to use them for these beautiful cards!
Love expecially the first one, such a great luck found this leftover with the sepia landscape scene in your recycled papers, it's a perfect background to match with this snowflake!

What a diverse collection! You versatility in using this die is outstanding! Thanks for sharing with us this week at Shopping Our Stash!
Hugz,
Chana, DT

These are all fabulous, these snowflakes are stunning and you showcased them beautifully!

what you do with those hands, is quite marvelous sweet lady....Merry Christmas...

Those snowflakes are gorgeous. Great cards!

Thanks for joining us at Shopping Our Stash!

Thanks for sharing your lovely crafting for Fan-tastic Tuesday challenge 116 and Crafting Musketeers 32 - hope to see you again soon, Hazel, DTs - you could also enter this into my CHNC challenge extra for December - I'd love to see it there too x

Hi Mrs. A. A fabulous set of cards, just love that sparkly snowflake - what a bargain!
Avril xx
p.s.Thanks for sharing with us at TioT

Those snowflakes are perfect on the cards. Clever idea.

Oh wow--what a great idea! These cards are beautiful & unique Mrs. A!

Great cards, a super idea thank you for joining us on the Tiot challenge hugs Bee.

Hello there Mrs A - coo these are lurvely - I was going to ask how much the snowflakes were but thought that was too daft - even for me! They are totally beautiful though and have made some really gorgeous creations! Thank you so much for entering the Crafty Calendar (Let it Snow) Challenge this month, lots of luck to you. Hugs Sue Pxxx DT.

Hi Mrs A
Loving the snowflakes. Must see if our Poundlands have any left. I got some smaller glittery ones from Lidl but these are fabulous.
Best wishes.
Ang x

Fab find! Those are great snowflakes!
Thanks for joining the SHOPPING OUR STASH crew for "Let It Snow" challenge!

Such gorgeous cards. The snowflakes are beautiful and the different blues are lovely xx