Several people have asked what
is in pesky Elf''s suitcase that he brought with him. 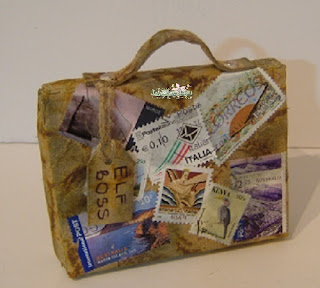 A good question as he refuses to be parted with it
and keeps it under his bed at night time.
So, whilst he was tied up with his Bungee Jumping
the other day  we decided to investigae!!!!!! 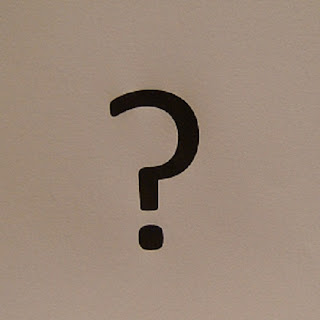 Not only is he content to drink The Doc's Grappa,
scoff his Bakwell Tarts and nick the birds Nuts
He has brought  his very own
Chocklit supply.
Is there no end to his exploits! 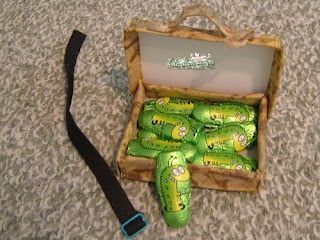 He was caught later on camera  beind the door having a snack. 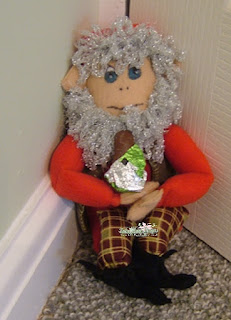 He is not here right now as
Brenda(aka Floral Fantasies) very kindly stopped by
on her way to the final dress rehearsal for the
Playground Nativity play and took him off with her.
I dread to think what he is going to get up to.

Filthy choklit muncher! ;) I hope Brenda keeps him away from the animals xx

Filthy choklit muncher! ;) I hope Brenda keeps him away from the animals xx

Right now he's flat out Valery Anne, not surprising after the morning he's had.

First thing he helped.....no hindered Anysia mucking out, climbed onto the stable roof to see if he could bunjy jump using a lead rope. That didn't go too well, he fell down and narrowly escaped Ben's humping great foot.

Next he came with me to the nail bar, well what a bad idea that was. We were all having a glass of bucks fizz, he stalked off and was found in the cupboard finished the bottle and had hiccups ever since. So it was a relief when he eventually fell asleep.

Heaven only knows what this afternoon holds.

Sorry no phots, he's hidden my camera and it's nowhere to be found.

I await with bated breath. It is lovely and peaceful here today. I had a sleep in and feel lovely and refreshed!! hugs Mrs A.

Oh my gosh. I have been away for quite a while so I have been scrolling backwards to see what the elf has been up to. I laughed and laughed and I'm so happy I came by. This starts my day off on such a happy note. Your cards are so pretty but that elf takes the cake (or will soon)! You have made the cutest things for him to do and I love it. Thank you for your lovely comments. Christmas blessings to you.

Ohhh... I would never thought that the elves ate so much!! Arci eats only small bits of cake and some spaghetti and drinks coffee :D
Poor Brenda... I hope that he doesn't make her go crazy too much!

Just as well Mrs.A he'll soon be back and causing mayhem again. xx

Another elf with a sweet tooth - I think they all love the sweets! I love his little suitcase. Mine brought no luggage, just the clothes on his back.

OMG, Brenda doesn't know what she has let herself in for but looks like she is finding out pdq.
So has he taken his suitcase with him or are you and the Doc gorging yourselves with chocolate?

Enjoy the break, he could be back with avengeance.

Thank you for doing that bit of detective work, Mrs. A! Now I know to be smart during the play and keep a very close eye on my choklit stash afore some pesky elf snatches it away from me! Hell hath no fury and all that!! I must say, this year's elf is quite energetic and adventurous what with bungee jumping and all. It's all that sugar from the choklit and Doc's tarts!! I'm wondering what Brenda and Elf are doing? ... See you in a bit. I brought both of Shirley's house dresses in case that fuchsia one clashes with Mary's robes. BTW, I heard this year there might be two baby Jesuses? Lord knows we could use two!! Happy Holiday Hugs, Darnell

Tee Hee. So glad Brenda took this Pesky Elf off your hands. You guys are just having way too much fun over at the Playground, and I am missing all of it! Boo hoo for me! Maybe I can look in while away, and at least enjoy the fun vicariously! Ya'll don't do anything I wouldn't (and I know Darnell won't!) Merry Christmas, Happy New Year, and best wishes that 2016 will be all that you wish it to be. TFS & Hugs.

Enjoy your break from the Pesky Elf. I'm sure that Brenda will want to return him early after all the mayhem he seems to be causing. She should have known not to let him near any drink!