I have just completed a swap to make a fabric wine Tote and my partner in Oz has received it now so I can post about it.
I don't generally use patterns I just make it up as I go along so there are no measurments(I just eye balled a bottle of wine for the sizing)!  I had some  sage green fuzzy fabric left over from making a project last yr and as you can cut and leave raw edges without it fraying decided this would be ideal for the outside of the cover. I also had a fat qtr of fabric which had fruits of the forest on it  along with bunches of grapes to use for the linning and decoration. Very appropriate I thought. 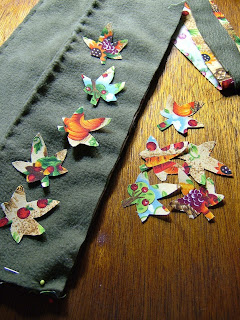 I used a leaf stamp that I had and stamped it out to make a template to cut out some vine leaves to applique on the outside.﻿ 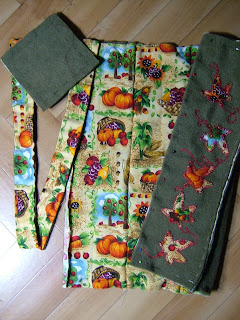 You can see the finnished applique with embroidered vines and the linning material before I
did the final seam and inserted the base and attached the carry handles.
﻿
﻿
﻿ 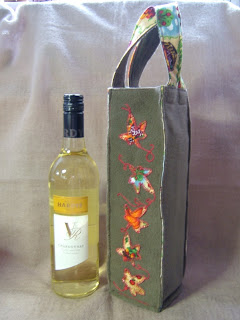 Not a very clear photo I'm afraid as it was a dismal day for taking pictures when I had to wrap it up to go in the post. I did stand a bottle of  Australian Hardy's VR Chardonnay next to it for the photo shoot though!
Entering into the following:
Pixies Crafty Workshop: Use your snippets.(green fabric and embroidery thread).
Craft us Crazy:  Anything but a card.
Tuesday Alchemy: Anything goes.
Pause Dream Enjoy: Anything goes.
Challenges 4 Everybody:  Anything goes.
﻿

Your cards are always lovely, Mrs. A but your sewing work is always BRILLIANT. I love, love, love this wine tote! It couldn't be more perfect with the pretty lining and lovely appliqued leaves with the little tendrils. Beautiful work and oh so handy for toting around one's wine! Hugs, Lesley

WONDERFUL Mrs A!!! It's just perfect for a bottle of wine - you clever thing! I trust you then consumed the contents BEFORE skipping into the Playground?!?!

Dont mind if I do!!! What a great tote love your design xx

I don't expect there's much of the wine left now!! Fab tote. xx

You are so clever Mrs A and I love that you made this from scratch without a pattern...your swap partner will love it :) Donna ♥ x

And it was a FULL bottle too!!!! LOL Great bag - envy your sewing skills Valery Anne - am sure the recipient loved it.

This looks great Mrs A! Can you hold my glass until next weekend please? Gave up alcohol for Lent and I am determined not to break it though I could do with a Baileys right now!!
Hugs
xx

Us Ozzies love our wine, I like a sweet one but we have some lovely places here to go to in amongst the vineyards...lovely swap..xxx

This was a very skillful project! You have good 'eyeballs'! Loved the fabric leaves and the green fabric outer shell was such a soft color. Bet somebody really enjoyed receiving this nice wine tote. TFS, and I thought your picture was just fine. Hugs

Very nice tote...I like the idea of the applique...very smart:)

Oh wow ! this is fabulous !! I LOVE this and will have to have a go at making one myself :-)

Thanks for pointing out that I had 2 bloglovin's ,, I didn't realise but did wonder where my followers had gone :-)

This is brilliant, as usual, Mrs. A.! I love the embroidery and the lining is bright and colorful; great handiwork and superb for being able to do things without patterns - I remember that from the lovely things you made that I was able to covet. :-) Love your work! ;-)

Wow - I'm bowing down in admiration again - it's perfect! Love the choice of fabrics. I keep thinking that I'd like to make a custom made hand luggage bag - but that's as far as it gets .. The thinking - lol. xx

That is a lovely bag. It must have taken you hours. Thank you for your visit and encouraging comments. That card was a lot of work, but put itself together just as I wanted. Hope you have not got too much snow. Have a good week. xx Maggie

This is fantastic Valery Anne ! I looooove this bag ! Hugs, blessings and love from Catherine

Wow what a fabulous project,stunning work. Thank you for joining us at Challenges 4 Everybody.

Fabulous make from no pattern , I love it. I love the fat quarter lining, and wow the applique leaves are brilliant.
xxxx

Now this is my kind of post, love the bottle of wine, bags ok
- joking, the bag looks fabulous, hope you are sharing this in the playground.

Hope very lovely! I am amazed and slightly awestruck that you can applique such teensy bits of fabric leaves...such skill!

Production of the thank you card is temporarily ground to a halt whilst Grandma Scrappymo goes to visit GreatGrandma again...soon as I return we will get it finished and into the post...we have not forgotten you!

Fabulous bag Mrs A! love the applique side *claps*
One of my Mom's fave tipples that is too ;)
Jo xx

Oh this is fabulous, what a wonderful make
Lindsay xx

Hi Mrs A, I am so pleased to have this wonderful tote in my household now. :-) It is beautiful and I and my mum love and appreciate the time it took for you to applique those lovely leaves. By the way it fits my sparkling wine bottle perfectly.

The tote is really pretty and I love the applique design.
Ali x