Hope you are all having as good a christmas as you possibly can in these strange times. Not the Christmas a lot of us had envisaged this year.
So if you have eaten the leg and the turkey breast, played musical chairs with just two chairs, pulled your crackers, drunk the sherry and now wondering what to do with the rest of the day,  then come on over and join in the fun.
Well I promised a bumper edition of Spot the Differences and here it is.
A Christmas Whimsy Village drawn by myself from a lesson we did back in November in the Shac Shac with Barbara Gray.( A little birdie has told me that the one Babara drew has now been made into a stamp and can be purchased from Clarity.)   I have traced once and drawn twice so there will be variances between the two. You are therefore  not looking for thicker/thinner lines or shading as there is plenty of that Lol.  All the differences are either items that are on picture 1 and removed from picture 2 or have been added only to picture 2.
Oh did I also mention that you are looking for 20 difference this time so sharpen your pencils, fresh elastic in your big girl bloomers and off we go. 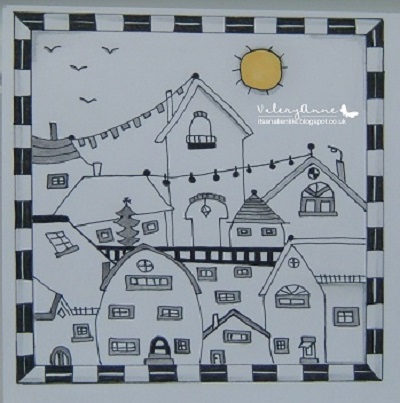 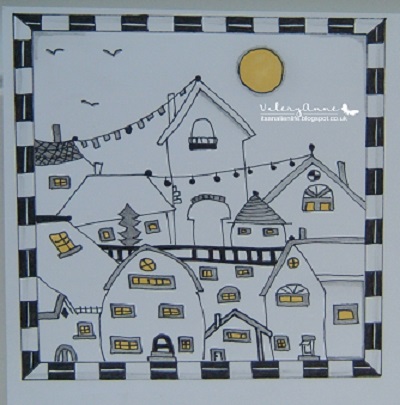 Game will stay open until 30th December so you have plenty of time to ponder. Please do not put your answers below in a comment but SEND me a seperate  email to the address in the side bar. Heading up Christmas Edition.  Open to all my current followers.  Goodie bags for the first correct answers.
Answers to game No 5 have been published here.
Appendage.
We had a total of 7 correct answers. Thankyou to everyone  who emailed me their lists.
Here is the definitive list of the spot the differences in the second image..
I actually managed to surpass myself and put in 21 differences that only became apparent when your answers came bowling in so anyone who got any 20 of the 21 was a winner.
1.    Round window of the house with the two steps, glass is orientated.
2.    Smoke missing from  chimney.
3.    Chimney missing from  house with the two steps.
4.    Star on tree is missing
5.    Sun  rays are missing .
6.    Tall house at back has stones missing from over the window.
7.    Lantern missing from archway .
8.    One bird has flown off.
9.    Tall house has brickwork showing on the side above archway.
10.  Diamond window pane blacked out on bottom house.
11.  Chimney added to house with the canopy doorway.
12.  Window ledge missing from the house with the missing smoke.
13.  Window below the central walkway is now curved instead of flat.
14.  Railing missing from the house with the added chimney.
15.  The central walkway has a bridge support missing.
16.  One of the flags flying on the bunting is black.
17.  Lights are now on in the windows.
18.  Roof that has the bunting attached to it now has a pattern on it.
19.  Panes missing from the window in the house with the canopy doorway.
20.  Drain pipe added to tiny house at front.
and the one I missed but you didn't.
21. Roofline on house with canopy doorway now grey. 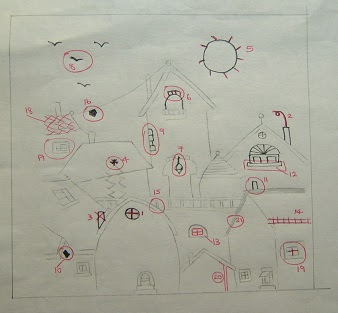 Just jumping around blogland whilst waiting for my tiny celebrating group to assemble for present opening.

I hope you have a really good Christmas and enjoy celebrating .. .. .. fingers crossed 2021 is going to be an vast improvement on this year.

I was just off to bed and saw the bumper Christmas Spot The Difference had been uploaded. I have given it my best shot - think I have found 20 differences but have doubts over one or two of them (tiredness at the end of the day might mean I'm seeing things!)

Keeping track of all these differences kept me on my toes, had to jot them down as I went along

I had to jot them down as I went along too. Email sent. xx

Wishing you a very Merry Christmas as well as a happy, healthy & blessed 2021! I am off to see if I can find all 20 differences. xoxo Becca

Today I finally have a bit of time to play. I founded twenty differences and emailed you just now.
Thanks for the fun!! :D

Thank you for a new Spot the Difference! We're going to watch a movie so I will work on this tomorrow and will see how I do... beautiful drawing! Hope you had a lovely holiday despite the circumstances.

Hi Mrs A what a brilliant spot the difference. Thank you for this. Take care. Hugs Jackie

That was a fun challenge! I hope I got them all!
I hope everyone had a nice Christmas! Ours was pretty quiet.... but I was so glad my daughter and her boyfriend were able to join us for a bit. First time I have seen them since March.
Here's to a better 2021 for all!

Look at you with enough energy to even create your own Spot the Difference drawings, wow! Our Christmas was smaller than usual but just as wonderful as ever with the kids loving every moment. I did manage to cut my finger badly right as dinner preparations were beginning but fortunately, my parents were there and they took over. Avoided a trip to the emergency room but it was a reminder that rushing and sharp things don't mix.
Hope your Christmas was a warm and wonderful one, and that you continue to stay safe and well. Merry Christmas to all!

I hope you had a fab Christmas! I will have a bash at this. Take care and stay safe my friend. Hugs xxxxxxx

Hope you had a peaceful Christmas and we all pray together that 2021 will be a safer year for everyone.

Well thanks to the magic of Zoom, our Christmas turned out to be better than expected. But I'm going to have to admit defeat again on this one. I was feeling quite pleased that I'd spotted 19 of the differences - then realised that TWO of the items on my list were duplicates!

Thanks for such a fun little game to play. You've done a great job with the drawing. I hope you and your family had a wonderful Christmas together with many blessings!

Forgot to mention your drawing in my email, what a great idea and now the sky's the limit for spot the difference. I like your fun little village and feel I know it very well now. x

I had to really get serious with this one! Have just emailed my answers to you - I had to print out the drawings and mark the differences on the sheet and I've attached it to my email. I found 20 so I hope they are correct! Thank you for the time, effort, and love that you put into making these fun games for us - it's obvious you put a lot of time into them and I really appreciated it! It's good to keep my brain sharp too! Happy New Year!

super entertaining series of finding the differences between two images, it brings back memories of my childhood
Many congratulations to you and yours in this new year that is coming, health and blessings
Hugs from Chile

Stunning card my friend and wish you the happiest, safest, and healthiest 2021. xx

E mail sent and thank you for the fun. Hope Christmas was peaceful? x.