It never rains but pours!

Having just gotten over the mayhem caused by two different accounts being hacked and getting my computer checked over by a Malware Program one of the accounts was again hacked into last Saturday! I could have cried (in fact I did) as I only just had everything back up and running. My poor computer had to be subjected to having it's insides scrubbed and disinfected yet again and I only had it back on line late last night. It did establish though that the hack was not done from my computer and how it was actually done is still under investigation.  I'm now all behind and resorting to a card I made when I went on the foam flower workshop and not shown yet.
The card base is lustre card adhered to white card. Coloured slightly by using an ink pad and a dauber before adhering the Hobby Solution die cut 'Wavy HSFD015'. The leaves are Gerbera Die JNGD006 'from John next door which were cut in white foam and coloured with the same ink pad an dauber. The flowers were cut using Prescut Die 'PCD09 Flower #1' in two shades of flower foam by Leane Creatief and moulded with a hot iron to shape them. Stamens added to the centres of the flowers. I will add a sentiment when I decide what occasion to use the card for. 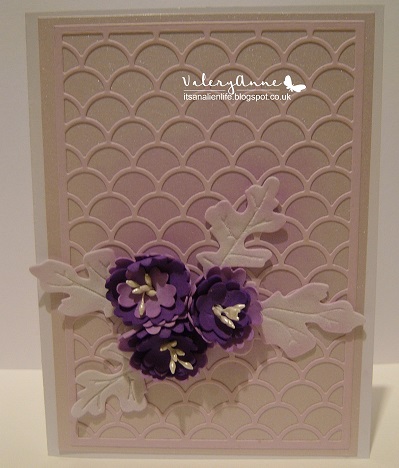 The #99 Butterfly challenge  is still running for a further fortnight and will now end on 8th May.
#100 will be a bumper edition to mark the special occasion.

So sorry to read about this Valery, I had it happen early last year and it causes so many problems. It's a pretty card and the purple flowers really pop against the soft background.

Hi Mrs A this is a stunning card those flowers are so pretty. I am so sorry that you have had all this trouble. I hope it is all sorted now. Take care. Hugs Jackie


A beautiful card - such pretty flowers. I hope your computer nightmare is now over.
Kath x

I can imagine the difficulty with a hacked computer, hopefully you are back to normal now. I love your pretty card, especially the flowers

Sorry for your pc, how many troubles!! I wish you a speedy solution!
Your card is a delight, so simple but very effective with that lattice background and the purple around the handmade flowers!! Thanks for the inspiration!!
Hugs

Sorry to read about your continued problems with the PC Valery. I love this card and the gorgeous colours you've used.

Glad you have those dates free.

Hi Mrs A, Sorry to read about your computer problems, once is bad enough but to happen again must be really frustrating.
Your card is lovely, the flowers look fabulous.
Avril xx

Oh no - I hope the investigation finds out where the hacking came from and it doesn't happen again. I would of cried too! Your card is gorgeous though. Love the background and great work with the flowers - Michelle x

Hacking is so prevalent now and it is everywhere. I had to pay a ridiculous fee to get my computer back up and running after the same thing happened to me. You have really been through a lot with yours and I understand. I hope they find the culprit. I like how you added the "bit of color" to the wavy die cut, it really shows off the lovely flowers.

Oh Mrs A l am so sorry to read this it's all so annoying l do feel for you.....onto a nicer note your card is so lovely nice you had this one to hand simply gorgeous everything you have done to create it ......take care xx

Hi Mrs A,
You must be one of the unluckiest people on this planet for this to happen twice you poor thing.
Not a cheap thing to have done either.
Love your wonderful card and those flowers look awesome and very beautiful.
Lots of crafty love. Jenny L.

Gosh Valery what an awful time your having, so frustrating for you, hopefully it's behind you now.
Gorgeous card, lovely colours and design,Kate x x

Oh Valerie I am so very sorry to hear that this has happened again, they should be hung, drawn and quartered, as the old saying goes.
Really lovely card, the flowers are gorgeous and love the way you have done the subtle colouring of the background.

Hi Mrs A., a very pretty card, love the soft colour you added to the background with the ink. Sorry to hear of your pc troubles, hope that the pain in the neck can be found and dealt with. Have a wonderful weekend... Megan

Oh how frustrating about your computer problems. I do hope that you don't have a huge mess to untangle with credit cards etc, after this last hack.I am lucky to have only had minor virus problems with my computers but dread having something major happen. Your card is so gorgeous and those foam flowers have wonderful dimension!

Damn virus! Nothing worse than a PC not functioning either. Hoping things sorted.
Delightful card. So pretty Mrs A. Like it very much!

Oh how disgusting! The bad in this world may not be the majority, but they sure cause the rest of us a lot of pain & sometimes it feels like there's more of them than there are of us! Hoping things go well for you now, Mrs. A. I must say, this is one gorgeous card! Love the flowers & the background!

What a terrible experience you've had with the computer, you've been really unlucky and no wonder you cried x Such a pretty card, love the soft background and those gorgeous flowers x

Gorgeous and elegant card, Valery. I love the purple flowers. I hope that from now on everything will go well with your computer. Kisses, my friend.

This is so pretty! I love the flowers. I was just looking at the foamaron when last in the paper shop just down the road from me. I put them back as I had a bunch of Penny Black sentiment stamps in my basket as they were on for 30% off.
I think I will get the foam next trip there and try these pretty flowers. I would think they would slide through the mail slot better as they have a bit of "give" to them.

I was delighted to see that the Butterfly Challenge was extended as I have made a card and have managed to lose it. Will go on a search today! Sometimes I haul them about the house trying to find better lighting for the photo. I will have to search far and wide...lol