Well blow me down with a snowflake if it isn't time again for the Christmas Club Girls to show their latest makes. The theme was set by Kate who has asked for Animals at Christmas.
Now because my mind works in mysterious ways (unbeknown to everyone including me sometimes) I took this to be animals that you wouldn't necessarily expect to see on your everyday christmas card!
I had a rootle through my used christmas card box and found this card front that has been in there forever, waiting for just the right moment to make an appearance. I trimmed the side edge nearest the fold to neaten and then had the idea of adding my beloved acetate to the front of it. I found a piece of snowing acetate which I cut down just a tad and adhered to the front of it with green brads.
I realised I only had a few left of certain colours so I diverted off to Ebay for a bit ( well quite a while actually as I got side tracked even further as one does) to purchase some more. I ended up buying some bits and bobs and would you believe it forgot the darn brads!!!  Then I went in search of a sentiment (in my words box) to use and found this Xcut die cut which I thought was perfect and cut out in an oddment of green card that matched the green edging. Popped the whole card front up on 3D tape added a piece of darker green ribbon from my stash and the card was done. 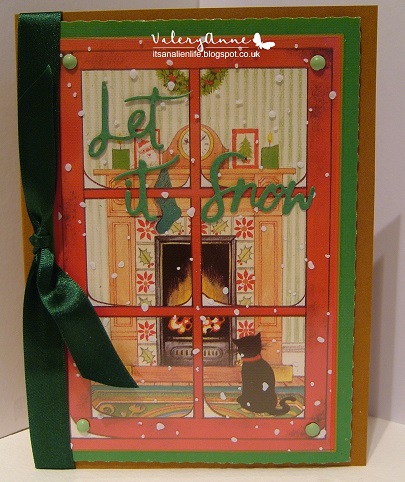 Second card uses this cute Camel die cut from Leanne Creatief. The sentiment is by Tonic which I thought fitting too.  I bought this Camel last year and used it to make a card and all these pieces were left over from putting that card together.  I made this one in double quick time as I didn't sneak back off to Ebay.  The backing paper was from a pad by LOTV called Krafty Christmas. 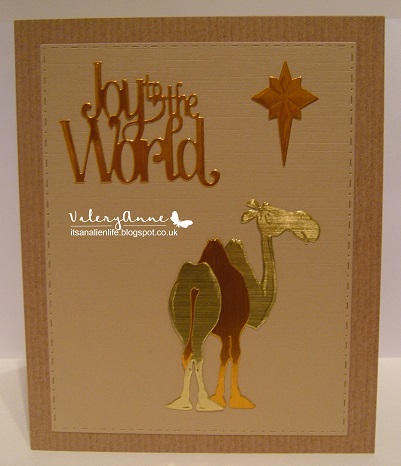 Lastly here are 3 slider tags that I made last year to sell at a christmas fayre that I haven't gotten round to blogging about . The Polar Bears and Seal all slide up and down on the tag.  Images were from a freebie stamp set in a magazine. These are just a few of them.  I made Penguins too but as they are classed as birds they are not being shown here. 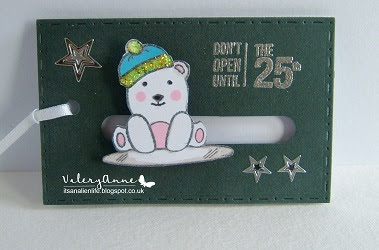 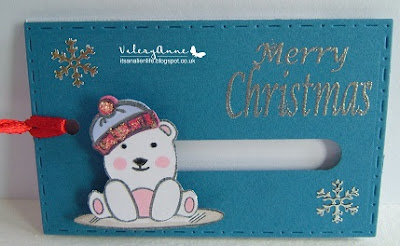 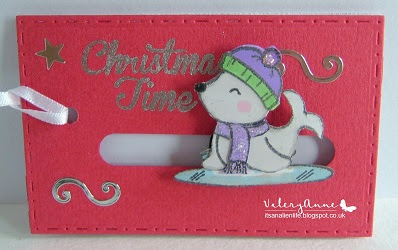 Okay. Gotta scoot I have Brads to buy!  See you soon or not depending on what else I get diverted with.

hello there Valery, you have made me laugh, I was just wondering whatever you meant by animals not seen at Christmas, till I scrolled down and saw this wonderful array of cards, all very fit for the challenge. Love them all, but the camel one is just ahead, and of course they are very Christmassy, otherwise the three Wise Men would have had to hoof it, have a Happy Easter, Kate x

I like all the animals on the cards but that camel is so cute! Your slider tags are great. Want to see what you do with your brads.

I thought the first card was fantastic and then a second card that was so fun, and then two darling sliders, wow you have been very creative! Fantastic collection of Christmas cards!

A superb set of cards for the challenge Valery, such great designs and I love your slider tags.
Lorraine

These are all fabulous Mrs A but that camel has to be my favourite. Happy easter xx

Oh my, how many Christmas cards! You has been very productive! They are all lovely but the first one is my absolutely favourite, such amazing effect with that snowing acetate on the warm inside scene!!
Happy Easter!

these are awesome Valery - I love all of your makes! Big hugs rachel x

My goodness Valery, you have been so productive!
The acetate window scene is charming, but the camel card is amazing. what wonderful dies. That camel looks so real!

The tags are so sweet. The little sliders are so cute.

Two fab cards Mrs A and I love the slider tags. Happy Easter, hope you're having a good weekend. Carol x

Hi Mrs A all your Christmas cards are stunning. I especially like the slider cards. I hope you had a very Happy Easter. Take care. Hugs Jackie

Lovely selection - you have been busy
I like your different take on the theme, and that camel is fab!
Anne x

Oh my, you always find the neatest things in your boxes, and did you ever come up trumps with this challenge! (especially loved the camel with 'attitude'.) Anyone would be so happy to receive one of these wonderful creations, and the sliders were adorable. One does tend to spend more time on eBay than was intended, so of late, I have kept myself from going there! Too easy to fall into temptation. Glad you were able to get in your garden, and hope there were not too many puddles. We had a sunny weekend, and today was a bit warmer than yesterday. Nice afternoon & dinner with the family so it's been a good day. TFS & have a good week

Both great cards, Valery. I love the Christmas scene and the cute camel. Kisses, my friend.

You rock the slider cards, Anne! These are so super cute and so is that hysterical camel!! I also like your rootle Christmas card! Hugs, Darnell

I love your interpretation of animals and Christmas cards. Love the cute slider tags...do you have a tutorial for us to make them? Spring is near...<3

Hi Mrs. A, gorgeous cards, love the re-used card front, I think it would look rather plain without all your added embellishments, the camel card made me think of the 'Alice the camel song' we used to sing and dance (maybe bump would be a better description) too. Have a wonderful week... Megan

What a fabulous array of Christmas projects for Kate's challenge. She will be so pleased. I love them all. Hugs Christine xx

Just popped over to thank you for your visits and apologise for being such a bad blogger, due to go into hospital next week when I hope they can sort this kidney once and for all and then I can get back to proper blog activity.

So easy to get distracted, especially when there is buying to be done! Love the first card with the snow acetate overlay and the green die cut sentiments and the brads. Such a fun second card and so unique and yes the sentiment goes so well with that fabulous die cut camel. Great slider cards too. Thank you for sharing your beautiful cards x

Hi Mrs A,
what a gorgeous array of cards.
They all looks so brilliantly created too.
Love the Camel one that is so unusual and great.
The slider ones are cute too.
Lots of craafty love. Jenny L.

What a great selection of cards you have created Valery....and I spy a bit of acetate...yes I do.....we are just home from our easter holiday in Wales in a lovely cottage without internet...but lots of snow! Xxxx

Super set of cards Valery. I like the spinners and that Camel is awesome what a character. Zoe x

All those cards are terrific. Love the style of those spider tag cards but that camel is my favourite.