Here is some more inspiration to show you for the current Butterfly Challenge
#99 Spin The Butterfly Wheel with the Letter D which runs for another week.

First card uses  the colour Dirt (Brown) , Die cut and Butterflies. The  pre coloured image is by Hunkydory from their Little Book of 'Vintage Lace'.  The die cut element is the Stitched Rectangles Frame by Crafts-Too and the Dirt colour is the card base, also  the die cut frame. There is also some dark salmon and denim blue on the top butterfly.  I have used my favourite (acetate) to give the appearance of a picture frame and raised it up with 3D pads giving it dimension so I  used all the elements of the  wheel bar one. The gold sticker sentiments were from my stash. 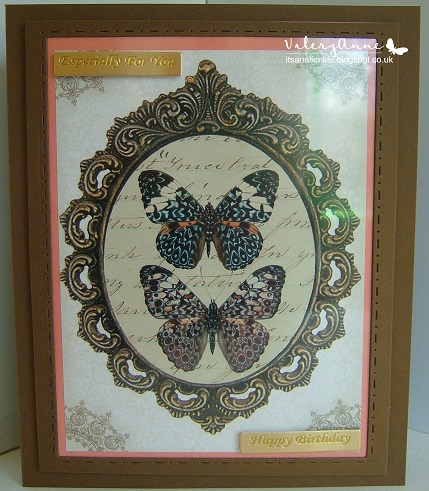 Second Card uses the colour Denim Blue , Digi image  and Butterfly. I have used a stamp set by Studio light JBS 03 which I have coloured using my Marvy Le Plume II pens and a white gel marker.
I have used a white card to make the base card and adhered a rectangle of Denim blue card stock before attaching the  image. The sentiment is a  digi by Digi Stamp Boutique from their Birthday Mr Bear set. The sentiment is actually a lot bigger when it comes in the file but I resized it to fit the card front.(That's what I like about using digis as you can resize them and flip them over too to suit your needs.) 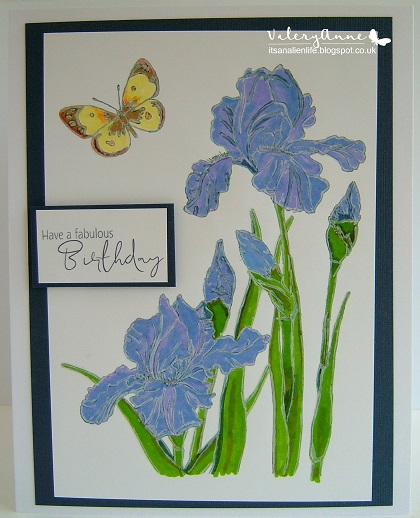 Third card uses all seven elements of the wheel just to show it can be done.
1. Butterfly.  (Metal Embellishment.)
2. Dirt. (Dark brown cardstock and I have coloured the girls hair brown.)
3. Denim Blue.  (Ribbon bow, gems on butterfly and the sash on the girls dress.)
4. Dark salmon for the base card.
5. Dimension (digi image is raised up on 3D pads, bow and butterfly give added dimension.)
6. Die cut  (Scallop edge on brown card.)
7. Digi image is by A Day For Daisies 'Gathering flowers'.

I used my promarkers and graph'it pens to colour the image and then gave a light dusting of Pearlescent chalks over the top which doesn't show in the picture but gives a nice overall sheen under the light.  The die cut is a scallop edge die by Diesire and the sentiment is a rub on. Gems and butterfly from my stash. 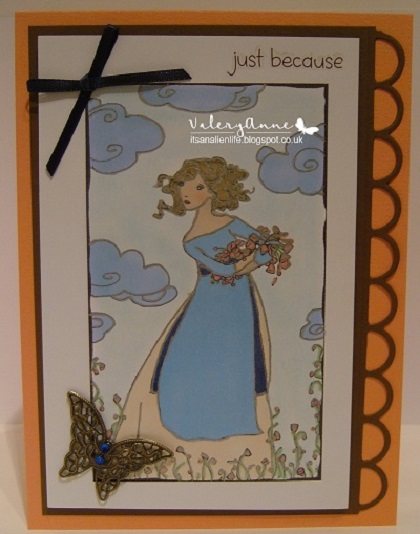 You have until  next Tuesday 24th to play along .

It is always a pleasure to see yours cards!
Hugs!

Good morning Mrs A all your cards are stunning they are just so beautiful. The sun is shining here. Have a great day. Take care. Hugs Jackie

All beautiful but I LOVE the 1st one x

Beautiful cards and all so different. The mirror frame is just wonderful, the iris look very real and I love the girl image in the last card.

The acetate on the first card and the tones of colours are fabulous. Striking second card and so elegant. Beautiful third card. Thank you for sharing these beauties x

Great cards here Mrs A. All so different but equally lovely!

Beautiful cards,Mrs A.The firtst one with the butterflies is my favorite.

Wow, three great interpretations of your own wheel! The first one is just gorgeous, such amazing and elegant card, very impressive! Love your colouring on the irises of the second one and the clean design and the last card looks very sweet and feminine, fab match with that vintage image, the modern colours and the black details!!

A lovely collection of inspiration Valery, especially love those glorious Irises. Not done too much crafting yet but hopefully I'll get round to joining in soon.

Hi Mrs A,
what brilliant array of cards for such great inspiration for the challenge.
My you are very clver combing all the elements in that last one.
Love the gorgeous irises in the second one and your have coloured it perfectly too.
Lots of crafty love. Jenny L.

Wow Mrs A you truly challenge us all to create asap.. pity I'm locked to certain cards at mo and not free to chose cos I would cplours denimm esp I like.
Not so keen on dirt! Anywhere esp on sheets. I did washing yest and as hunv out sheets I spoke severely tp birds nearby tp keep away. Result? Washing one sheet today. Of course you never find it till you run out to bring washing in!!!
Bloggy hugs.. have God blessed weekend. Shaz in Oz.x

Wow, three amazing cards for this month's wheel! You have been busy having fun in your craft room. Have a wonderful weekend!

Wow Valery what a lovely collection of card designs.

You are amazing with the unique-ness of each of these beautiful cards that fit your challenge so well. I love each one, and am especially taken with that gorgeous Iris & butterfly. The imagery on #1 looks so dimensional too, and very elegant. The clever metal butterfly looks very pretty with the lovely flower gathering lady in her garden, and the loopy border is a nice trim against the color of your card base. Liked the idea of dusty the pearly chalks over the finished product, bet it does give such a nice sheen. Hope the rain & lightning soon goes away for ya'll. TFS & Hugs

I love Butterflies and your cards are super pretty. Butterflies are the bearers of 10,000 happinesses. Creative Bliss Dear...<3

These are really sensational cards, Anne! Each one is really its own work of art! That iris is particularly stunning!! I hope your computer problems are all sorted and the sun is shining!! Hugs, Darnell

Three wonderful cards Mrs A, great designs and some fabulous butterflies. Hope the computer is sorted - hopefully I will have one tomorrow xx

These are all such pretty cards. You inspired me to make a card when I read the brief for this challenge. I chose D dirt, D denim and of course my butterflies! Now I just have to find it...I've misplaced it at the mo... 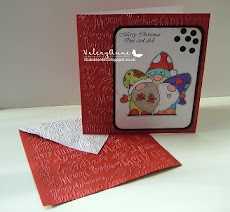