I feel as if we are fighting a loosing battle here at the moment . No sooner do we get one thing fixed then something else goes wrong. Now we have no Email. Been like that since last Friday. Our service provider is supposed to be on the case but nothing seems to be being sorted.

A new challenge has started over at the Butterfly Blog.

#109 Spin The Butterfly wheel with the Letter B.

Here are my first two inspiration cards for you.
The first one uses  Butterflies/Buff/Borders.

It would have helped if I had actually had the image the right way up whilst colouring it in!! The flower arrangement would have made a lot more sense but I think I have gotten away with it.  Can't believe I didn't realise it was a window box. I thought the brackets at the top of the window looked a bit odd and I still didn't twig. Lol. Thank goodness I didn't add the sentiment till I had realised my mistake. 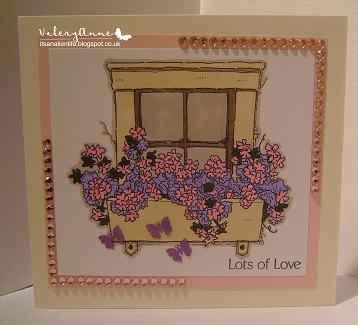 The image is by Mo's Digital Pencil called 'Rustic Window Box. ' In my defence I always right the name of the image on the back when I print off the digi images (so that I don't forget whose they are)and I had written it upside down on this one.  Coloured in using my Graph'it markers. The butterflies were already pre punched in white card and I also coloured with a Graph'it pen.  The sentiment is by Kanban. Strips of pink gems were in my stash and used to make the borders. Image adhered to pink card slightly larger and then adhered to the buff coloured card which I completely covered the front of the white base card with.

The second one  uses  Butterfly/Baby blue/ Birthday.
This is a stamp by Creative Expressions called Caroline's Butterfly Dreams.  I must admit I was impressed on how well it stamped out just using on an acrylic block  and with only one inking. 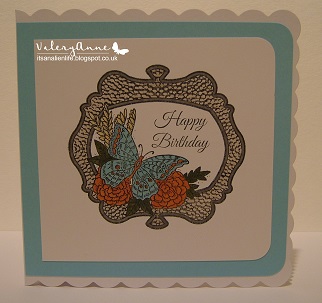 Coloured this one using my promarkers. I  also used two shades of grey markers to colour the framework which I thought looked quite like a pewter tray.  The sentiment is again by Kanban and I didn't stamp it until I had done the colouring so heart was in mouth when I  finally added it. I used a white scalloped base card and trimmed the two outside corners on the blue cardstock using my corner chomper and again on the stamped image.
Hope you will find time to play along. Challenge is for two weeks as normal.

Two beautiful cards Valery Anne, I didn't notice the top card was wrong until you pointed it out. Hope your ankle is better now.

Two lovely cards Mrs A, especially love the first one & the colours of the 2nd x

Hi Mrs A both of your cards are gorgeous I love them both. Take care. Hugs Jackie

Oh dear you are having a time of it, hope you get your emails sorted soon.
Two beautiful cards Valery, love the images and your designs, lovely colouring too, Kate x

Two beauties,ValeryAnne.Beautifully colouring too.Love the story from the first card :).

You know what' they' say.. "It never rains but it pours", looks like you are having a right drenching.
Two lovely cards and great colours and design.

Two beautiful cards, love the design! The first one looks delightful with that windows box full of flowers!

These are stunning, the window scene is so fresh and cheery and like the gem edgings, and the second card with the framed butterfly is striking, like the colors and your coloring! Good luck with your e-mail.

Two great looking cards, they both turned out fantastic...
I hope you will get everything fix on your computer...g

Isn't it strange that the internet claims to make life so much quicker yet creates so many problems to slow us down. Two lovely cards, off to check out the new wheel and hopefully get something made before our hols.

Hi Mrs A, Two gorgeous cards and looking at the first one upside down, I can see how you thought it was possibly a canopy over the window!
Lovely colouring on the second on the image looks so details.
Hope you get the emails sorted out.
Avril xx

Two fabulous designs Valery, We all have those days, I have glued things upside down and in the wrong position. Still your coloring and designs are lovely.

You sure did get away with it on your first beautiful card....It is so very pretty. What a classy and elegant second card and do so love the colourway x. Good luck with the continued technology glitches x.

Stunning cards Mrs A I do hope to be able to join in again..xx

What a wonderful theme this is ...hoping I get time to take part!!
Cheers
Dr Sonia

They're both very pretty cards, and I love the flower box window scene (thanks for the chuckles over not realizing it was a window box!) LOL I often laugh at myself for the same silly mistakes when my eyes see something that isn't supposed to be there! LOL