It was our Son in Law's Birthday last week
and this is the card I made for him. 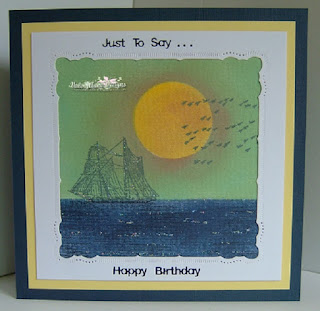 I had previously made a card depicting 3 ships
which went as a swap which I  had really liked
so decided to try a card depicting just one ship.
I think I have the balance about right by changing
the birds in flight.
Ship stamp is by 'Inkylicious Twincies'.
I created the background using inks pads and sponges
to apply the colour.
Birds in flight is a stamp by Stampscape.
I used liberal amounts of glamour dust on the sails
and water which did show more up IRL.
The frame is the negative from a previously used project.

Hi this is a stunning birthday card. Thank you for joining us at the Unicorn Challenge Blog for Challenge 13 “Happy Birthday! We are a year old.” Hugs Jackie (DT)

Very beautiful card. I'm sure he was very pleased with this card. Ideal for a masculine card. Hugs, Veerle x

Oh this is stunning Valery, your inking is brilliant and what wonderful image, I can see the sparkle, love your design, Kate x

Stunning card. Thanks for joining us at Unicorn Challenge

wow, really amazing card, I love cards with such a beautiful scene.

What a lovely image and I like the frame very much. I see Norm is not overdoing it!

Beautiful scene, love your background in the leftover frame and the ship with the flaying birds on the sun! Tthe waves are wonderful with their sparkling!

It's a lovely card for your SIL Valery and you have achieved such lovely depth of colour.

Lovely card! Thanks for joining us at Craft Your Passion Challenges.Hope to see you again next week. Hugs, Valentina DT﻿

This is so lovely x

This is a beaut, love the colours x

Hi Mrs A,
what a fab scene card.
I love the wonderful inking, and glitter on the sails looks like the sun is twinkling on them.
Great slight waves of the sea also.
Lots of crafty love. Jenny L.

I love 'scene' cards. You did a great job on this one. Your son-in-law should enjoy it! Thanks for sharing at Unicorn Challenges. Barbara DT

The balance looks right to me, Mrs. A., but then I'm not sure if that counts for anything, beings how I'm unbalanced in my own mind! One thing I know for sure is I loves it and I'll bet your DSIL loves it, too! Super Hugs, Darnell

I don't know about you but I am really struggling to keep up with commenting in blogland .. .. where does the time go?

Pleased my little tutorial was useful for you.

Love the card you have posted here. Great colours to work with .. .. I bet your Son in Law thought it was great too.

Hope all is well with you.

This is stunning, like the colors and scene you created!

This is lovely
Thanks for sharing at Brown Sugar Challenges x

Wow, this is great. Your water is so authentic and the ship looks like it is embarking on a journey. The birds add a perfect touch. Love this.

lovely card thanks for sharing with CLC Rachel DT

Very nice, he will like it for sure, Wonderful and thank you for sharing with us at 4 Crafty Chicks.
Leanne DT/4CC

Thank you for sharing your sailing ship card with us at Love To Craft Challenge Blog. Great way to use leftovers from another project.