I am behind with my Bakers Dozen for this Months christmas card stash so I looked at what was still out on my desk and before tidying it away decided to see how many cards I could make from the bits and bobs.
First Card.
When I have small bits of design paper left over I make panels up with the strips and then I have ready made backgrounds to either use as panels on a card or to die cut shapes and sentiments from.  This card has an already made up panel and a sentiment that I salvaged from a shop bought card I had received. Too nice to just  throw out. We had a box of old decorations up in the loft that The Doc brought down and before disposing of them  I went through and salvaged any bits and bobs suitable for putting on cards. The poinsettia came from a 9" high christmas tree that had seen better days. 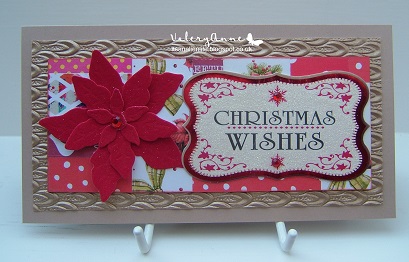 Second Card.
Another already made up panel of blues/greens/turquoise papers that I teemed up with silver and Turquoise backing card to make the base card. The sentiment I salvaged from a shop received card and the ribbon, gems and snowflakes were found in my stash. Everything was layered up for 3D dimension. 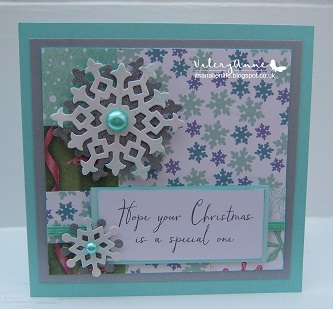 Third  Card.
Again using an already made up panel of browns/creams/burgundy design paper oddments. The Merry Christmas was hanging on the 9" christmas tree already mentioned above. It had two holes at the top that ribbon had been looped through and looked a bit odd as not part of the wording. I solved the problem by stickinga gem over each hole. I also  found an oddment of ribbon that matched the burgundy in the papers.  This is quite a small card being only 4.75" x 3.5" but it still packs a punch. 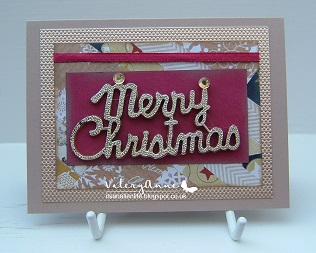 Fourth Card.
Again an already made up panel of pink/burgundy/brown and red spotty papers and a sentiment die cut from another panel  using a Tonic Die.  The gems/flower and oddment of ribbon were gathering dust on my desk. All layered up onto larger pieces of card stock to make a bigger card. 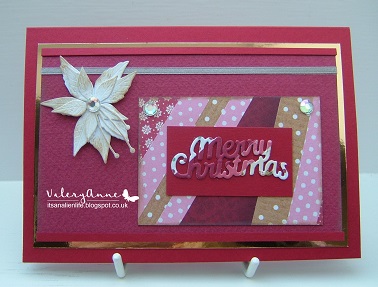 Fifth Card.
A long narrow one this time as the panel I had was that shape . I had an oddment of bakers twine on my desk so wrapped it around the panel before layering up with plain cardstock and sparkly card.  The sentiment was from a received shop bought card and the gems I found in my stash. 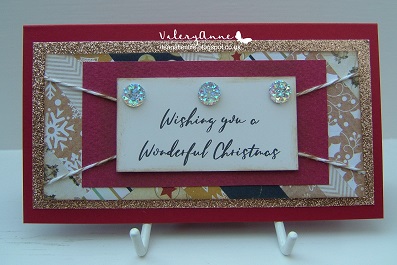 I am still getting over the vaccine. Like a few other people I have heard  from, I got flu like symptons about 8 days after my initial reaction. Runnng nose/wet eyes and just could not get warm no matter how much clothes I piled on. The Doc felt rough too about the same interlude from his jab and  felt like he had been punched in the arm . He is still sporting a bruise on his arm the size of a large grape.  I had no reaction at the point of entry on my arm so it really is affecting people differently.  It is the only way forward though if we are to have any chance of overcoming this pandemic.

I often wonder why it is that I, and many others, just cannot bear to throw out even the smallest scraps of card and/or paper. You've certainly made use of lots of bits and pieces to make this selection of Christmas cards - well done. I've had a totally unsuccessful attempt at reducing my 'paper mountain' and have only managed to shuffle it from place to place but it has at least reminded me of some of what I have and how it might best be used.

Oh wow love your recycling cards Mrs A your certainly do put them to good use and come up trumps totally stunning they really are and l like the design too! ....so right everyone is effected differently hopefully you and the Doc has come through the worse and as you specified it’s the only way forward to get us back to normality take care x

You've created some beautiful cards using your left over bits and bobs, great recycling too. I really like the idea of using the little scraps of dp to make panels for later use.
You have been really unlucky with the after effects of the vaccine, hope you feel better soon.
xx

Hi Mrs A all your cards are gorgeous. What a great way to use up scraps. Thank you for the inspiration. Take care. Hugs Jackie

Great cards as always Mrs A.
Still waiting to be called for my jab ( likely at least another 3-4 weeks as they've only just started the over 65's here - slow doesn't describe it)but that said I am keeping everything crossed that I am one of the lucky ones who just get a headache. Sad that you've been so poorly and hope you are both starting to feel better now. xx

These are fantastic 'scrappy' cards!
I thought I was a hoarder, but you
have me beat!

Re the vaccine, Canada is slow off the mark!
About 2% are now done! So somewhere in the
future we will get done!!!

A fabulous collection of cards, well done using up the bits and bobs left on your desk.
I must be one of the lucky ones, I had no side effects after my vaccine.
Pauline - Crafting with Cotnob
x

Ah these are all lovely, what great makes, Sorry to hear you are still feeling rough after your vaccine, Hope it eases for you soon, H xx

Wow what a fabulous selection of festive cards they all look wonderful, I have so many bits of card and papers that I hate to throw out but unfortunately I have to cruel to be kind, lol.
hugs
lorraine x

I love how you always find ways to rescue cards you've received. Every one of these look terrific. I'm glad you are starting to get over the side effects and hope that took care of any from the next one.

WOW! you have been busy Valery, all of your cards are gorgeous, you've designed them all beautifully, gorgeous colours too.
You've had a horrible reaction to the vaccine, really quite extreme, I hope the second jab is better, Kate x

A super collection of cards, my favorite is the first one.

Always love seeing what others make with bits and bobs for cards, and you recycled your items so well! Great way to use strips of papers and parts of commercial cards!. I have a full box of them, so thanks for the all the inspirations! I need also a bit more time in my busy life... Sigh. Love especially the first one with that old poinsettia coming from the Christmas tree, gorgeous!
So glad to hear that you are coming out from the bad side effect of the jab. I know about a lot of people have had them, also very dangerous and scaring. Take care of you and hubby, stay strong.
Hugs

A beautiful selection of cards Mrs A. Just shows you why we keep our scraps!!
Love all the designs.
I had quite a few effects but well worth it. I wasn't scared, as I am with going out near people.
Stay safe, Carol S.xxx

You HAVE been busy Mrs A, a wonderful collection of cards. Hope you and the Doc will be fully recovered soon. xx

Wonderful cards, Mrs A! I especially love the elegance of the first one! So sorry you & your hubby have had side effects. Fingers crossed I skip them--haha! Just got the Pfizer first dose today, so we'll see. Hubby's first dose is Friday & pretty sure his will be Moderna. At least there's the promise of better days ahead now.

A really pretty selection of cards. I especially like the first one x

I love how you made the bakcogurnds with pieces of designer papers and everyone of your cards is creative and unique. I always admire how you re-cycle too Mrs A. Yes the vaccination is the only way out of this pandemic but you sure have had a rough ride x.

Beautiful selection of cards and great recycling and use of scraps.Sorry to hear about your reactions and hope you feel better soon-we didn't have any reaction but daughter who is a carer had hers at work and her and a few of the others had a few symptoms
Carol x

I love how resourceful you are in using your bits to make cards! I save my bits and toss them in a 12x12 tub and often go digging in there but I'm not as efficient as you are in using them to create backgrounds first! What a brilliant idea! I'm particularly fond of the first card with the red poinsettia and that gorgeous gold embossed background, but they're all beautiful!

My, you have made a ton of cards this time Mrs A, all gorgeous and beautifully created from bits and bobs which is always a great thing to make use of those.
Lorraine

Wow you made fabulous use of bit and bobs. They look amazing. Zoe x