Playing in the Snow.

It is time again for the girls in the Christmas Card to show our next makes. It is with heavy hearts though  that we will be posting our cards today  as we have lost one of our own. Shaz lost her long battle against Cancer yesterday.  Rest in peace now Shaz.
Lorraine set the theme this time which is Playing in the Snow.  I found these freebie papers in my stash going back to Dec 2015 from Making Cards Magazine by Hunkydory and managed to make 3 cards from them.
I just layered and matted in different configurations using red and navy cardstock from my stash. Gems were from my stash as well.
Card 1 using the main sheet of paper and one of the sentiments fussy cut from another sheet. 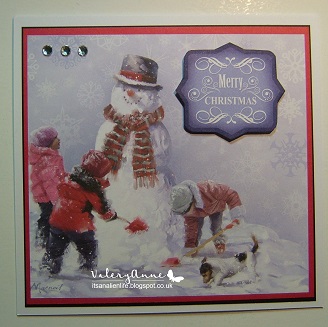 Card 2. Using mostly the sentiment sheets and image  that already had the border on it in the design. 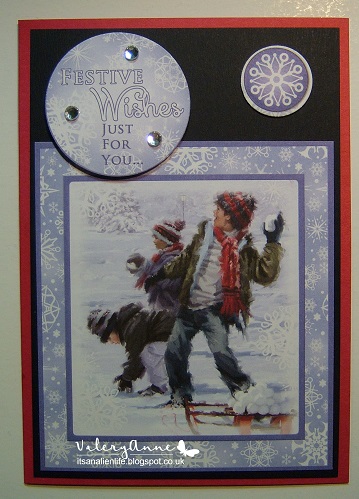 Card 3. I was left with 2 circle sentiments  with the same image on them and made the card below.  I cut the middle from one of the images and made an acetate window placing the  cut middle on the inside of the card. The acetate had snowflakes on it which I thought perfect as the boy is throwing a snowball. 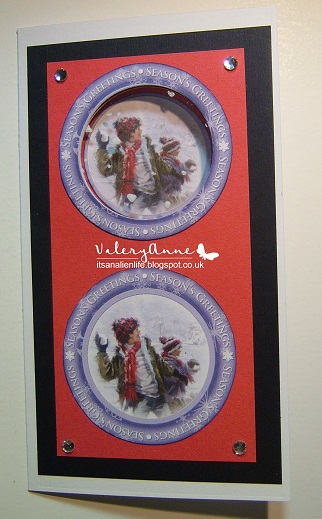 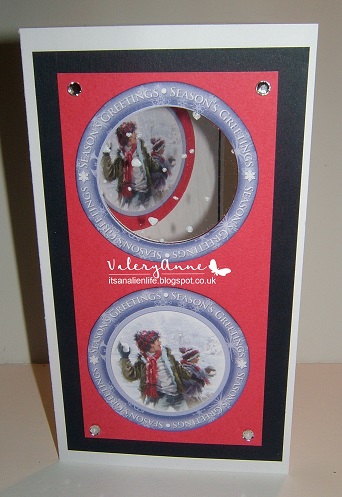 I am going to be short this month so will need to make a few more before the next show and tell.
Thankyou to you all for your well wishes. I have never had such a drastic reaction from a vaccination  before. I was advised to not have the Pfizer  one for this very reason due to all my allergies  with certain drugs so am not looking forward to having the second dose in 11 weeks. I am slowly feeling back to normal after being out of it for 72hrs.  The Doc had his vaccine on the same day albeit at a different location. He was supposed to have the Pfizer but they had run out by the time of his appointment and so ended up having the same one as me.

What a fabulous array of cards Valerie. Sorry to hear you have had such a bad time with your vaccine jag. I got the Astra one and never felt a thing. I am finding it hard just now too as my sight is rapidly deteriorating but I do have an appointment on the 23rd February so hopefully they can do something to help. It’s my distance vision mainly . Hope you feel better soon. Hugs Rita xxxx

I forgot to say I can't believe Shaz is gone, is this the same Shaz from Aussie? I didn't know she was well.... ♥

Hi Mrs A I am so sorry to hear of the loss of one of your friends. The cards you have made are gorgeous. I am pleased that you are feeling better. Take care. Hugs Jackie

Fabulous cards Mrs A - I remember having those papers too.

I hope you're now making a good recovery after your Covid jab - hopefully you won't have such a bad reaction to the second one.

A gorgeous set of cards for my challenge this week Mrs A, glad to hear that you are feeling much better now too.
Lorraine

So sorry for your loss.
But the cards are so beautiful, I love all these images.
I am glad you are feeling better.
Crafty hugs xx

Three lovely snow play cards for the challenge. Pleased to hear you are feeling a bit better after your reaction to the vaccine. Take care

A beautiful collection of cards Valery Anne. Sorry to hear that you've had a bad reaction to your Vaccine. Hubby had his yesterday but had the Pfizeer one, so far so good. I have heard of quite a few people having had a reaction to the other vaccine though. I have a little longer to wait.

I really hope you are on the mend Mrs A. What a torrid time.
Not expecting ours until the end of March/beginning April according to current calculations - not looking forward to it but know it's necessary.
Great cards xx

Hi Valery, your selection of cards is fabulous, lots of fun in the snow going on there.
Sorry to hear that you had such a bad reaction to the vaccine, I hope the second one isn't so bad, take care, Kate x

So sorry to hear of the loss of your friend and your bad reaction to the vaccine, glad you're feeling a bit better now- hopefully your body will cope better with the second jab.
Fabulous snowy Christmas cards- I love to see kids playing in the snow...from indoors where I'm nice and warm.
xx

Sorry to hear about the loss of your friend.Gorgeous selection of cards and love all the imagesHope you are feeling better now after your bad reaction to the vaccine
Carol x

Oh so sorry to hear about Shaz!

Your cards are lovely.

So sorry for the loss of your friend! I don't think she is the Shaz I know, Shaz in Oz, as she posted today on her Bible blog.
I'm glad to know that you are feeling much better, but please take care.
You used so well those free papers, lovely cards! The last one design with the hole and the acetate with snowflakes is really gorgeous and fun.
Hugs

So glad that you are feeling a little better. A great collection of cards.

So glad to see your post today but also sorry to read of Shaz losing her fight against cancer my thoughts and prayers go to her family’s....your cards are so lovely Mrs A and how lovely to read your feeling a lot better l cannot imagine what you suffered but hopefully your 2nd vaccine will be ok l can understand your apprehension can be so worrying having su.fford like you did stay safe xx

I am sorry to hear about your friend.
Your cards are amazing. Love the cute images.
Valerija xx

Fantastic collection of cards! I'm glad you are doing better.

I am so sorry to hear the very sad news of your friend Mrs A. x.
Love the vintage styles of your wonderful and fun Christmas cards. No wonder you are not looking forward to your next vaccinations x.

So sorry to hear of you losing a close friend Mrs A.
Love the cards and the designs are all gorgeous.
We had our first Vaccine on Sunday morning. Had a sore arm and not useable on Monday and also felt odd and spent all day sitting on the sofa doing nothing.
Today I was much better so nearly back to normal.
Hope you feel better soon.
Love and hugs,
Carol S.xxxx

I think these are pretty x