There is a new challenge on the block called Lets Squash It that emplores you to use your embossing folders and to dig them out and dust them off. . I am guilty as charged on that count as I have a  number of / quite a few actually, almost as many as I have pairs of shoes (and I'm not telling how many of those I have either) that have never seen the light of day.  Challenge #1 is asking you to use a Geometric pattern and Metallic Card or Metal Sheets. So I had a riffle through my stash and found this embossing folder which was to my liking and found some gold metallic card stock that was in a pack  6 x 6. This was as far as it got for a week as I couldn't think of a thing to make with it. I didn't want to make a Birthday or Christmas design or Halloween either but then remembered a digi paper I had seen on Etsy so went off to purchase it.  Trouble was I found some more I liked  as well and it sort of fell into the basket at the same time and ended up not using the one I went to buy! 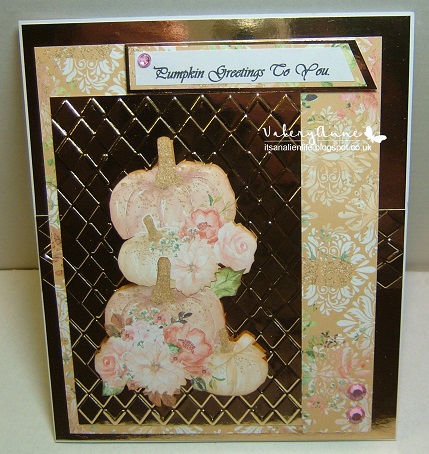 The embossing folder is by Sizzix No 655837 -AL called 'Argyle (L)'  and does rather look like the pattern you find on sweaters of that name.  It was a devil to photograph with the gold metallic card without either seeing the flash or the actual camera in the reflection.  The digi paper is from an Etsy supplier called Design Lover Studio  ' Floral Pumpkin'  and as soon as I saw it knew it was the one for the card. Because the cardstock was only 6 x 6 and my card measures 6 x 7 I need to butt two pieces together so I embossed an extra strip and added it across the join behind the design paper before adhering to the card base. I have used a total of 3 different papers from the set. The base paper (no2)  has a diamond design on it and I fussy cut the two pumpkins (from papers no 6 and 7) and then interlocked them. The sentiment was created in word and printed off.
Entering into the following challenges:
Lets Squash It #1 Use a Geometric Embossing folder and Metallic Card. 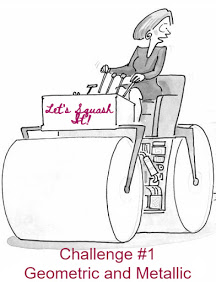 Great card for this new challenge. Maybe I should take a look because I have a few - not let's be honest - loads of embossing folders which deserve an airing. Love how you bought more than intended with the papers - sort of thing I would do 😀

Hi Mrs A this is a stunning card. I do love it. Take care. Hugs Jackie

Great job here Mrs A.... I also have tons of embossing folders which are perfect for Halloween as they're covered in cobwebs...! z

The floral pumpkins are beautiful and the embossed metallic background is stunning, what a lovely combination. So good to hear about a new Challenge blog too-.
xx

Hi Mrs A. Laughing, cos yes, that embossed metallic stuff is the beedoozles to photo. But doesn't it just look amazing in the real!! Gorgeous card. Love how you embossed the extra strip you used as well. Thanks for joining the first Let's Squash It! challenge. Hugz

Thanks for playing along in our new challenge, your card is gorgeous. I found photographing the mirror card above a piece of white card helped - it bounces the light off it a little. So glad you've found our challenge, Jo x

Oh Valery I love pumpkins, but these are gorgeous. Who would have thought pumpkins could be so pretty. Lovely card. Zoe x

Beautiful card Mrs A. I love those pumpkins. I've started my card and don't look forward to trying to photograph it either! I think I will have to pick my time and try and get good natural lighting.

A pretty pumpkin image and love the colours. A gorgeous card Mrs. A. Hugs, Carol S.xx

Love those pumpkins, they are so pretty. I saw a monster of a pumpkim in the supermarket display this morning. Creamy coloured, came upto my thigh (from the floor) and looked real! x

Such a lovely card with those pumpkins on embossed metallic background! Thank you for sharing with us at Creative Knockouts! Hugs !! Bhavya DT.

Great card and what a fab idea for a challenge!! I have so many embossing folders that like yours hide in the drawer!!! Hope alls well, Hazelx

Great use of the wonderful Argyle embossing folder and what pretty papers. Had quite a chuckle about your recent purchases and then not ending up using the one you thought you would x.

Lovely card Valery, I love the pretty pumpkins and the lovely EF, super design and it's a great idea for a challenge, Kate x

Just beautiful Valery! Lovely design! Thanks so much for joining in the fun at our Sisterhood of Crafters challenge! Good Luck and we hope you’ll come back often.

Darlene
SISTERHOOD OF CRAFTERS
DAR’S CRAFTY CREATIONS
Please stop in for a visit!

Take shots of metallic is always a trouble for me too! Amazing card, the embossing on gold looks great and love so much the vintage papers you used!

I love this beautiful fall card! Foil paper makes every card better, in my opinion, and this is a great background for your images. Thank you for playing with us at the Sisterhood of Crafters Challenge and hope you come back soon.

Fabulous card, like those pumpkins and the foil background is great with them!

Fabulous card here, love the background too. Hope you sent me some of those honey and peach muffins , ♥

Thank you for playing along with us at Creative Knockouts!

It's nice to see embossing folders getting some love. Your card is so pretty, Valery. The shine and texture along with that lovely paper is awesome.

What a lovely card! Like you, I struggled taking a photo of my entry as well. I do love your pumpkins - such pretty colours. Hope you're surviving this awful weather today - constant rain here. Even Dudley took one look and tried to head straight back indoors!

Fab card and the embossing looks gorgeous in the metallic card! I am guilty too of having lots of embossing folders and many of them not used yet. We are naughty! Take care and stay safe. Hugs xxxxxxx

A lovely card Valery! Really pretty. I don't use my embossing folders as much as I should either