A card made using  a digital print out  from  Craftsuprint called Treasured Moments card topper which makes into a corner stacker. I have used the colour Damson with Butterflies as inspiration for you, showing that you do not have to use all the elements on the Butterfly Wheel Challenge #147 or even the the card shape which I have already showcased on my previous post.  The challenge is running until 6th Oct so there is still nearly 2 weeks left to run. I have 1 more card to show which I will post here next week.
I made the card below with a dear friend in mind for her Birthday which isn't until next May but the early bird catches the worm so they say!! 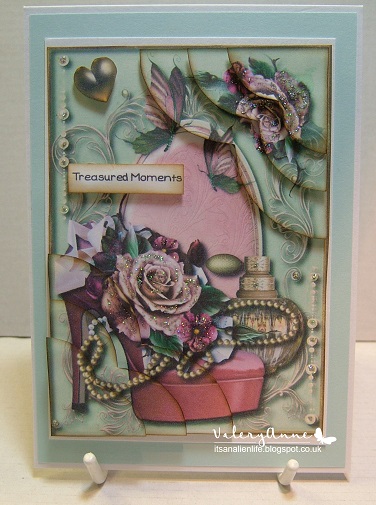 I found some plain cardstock that was the exact colour of the green on the digital print so I matted some onto a tent shape white card base and then another layer of white cardstock. I darkened all the cut edges using distress inks so that the white didn't  show up on  the decoupaged layers. I used stickles glue for a bit of added sparkle   The sentiment tag was part of  the name of the print out which I simply cut down and aged with more of the distress ink.  I know Gerry will like  this card as those shoes are just the height that she loves to  wear!!  Below is the card on its side where I tried to show all the layers on the two opposite corners but it has come out a bit blurry. 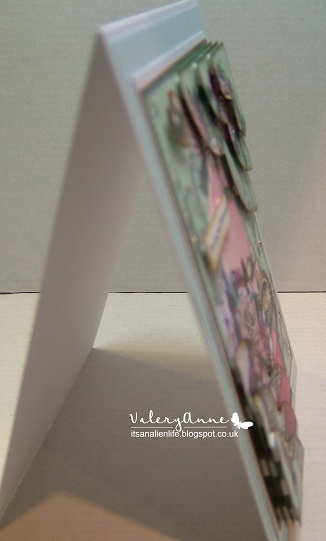 Not come across a corner stacker before - works well here and the colours are lovely.

Hi Mrs A this is a stunning card. I love it. Have a good weekend. Take care. Hugs Jackie

Firstly I am in awe of your friend Gerry being able to wear shoes at this height!....x. A thoughtful and beautiful card and I love the stacking on the edge x.

Beautiful some of the prints are really cute , have a lovely weekend. x

Gorgeous card Mrs A! Love the stacked corners, they look great- wish I could wear shoes like that!
xx

How gorgeous, that stacked corner is so striking! Looking forward to making one!

What a lovely card, Valery. I love the layers you created! Great image too. I am sure your friend will love to receive it. Kisses!

This is awesome, Valery. I've never seen anything like this with so much dimension. It sure elevates card making. She will love this unique card. My days of wearing shoes like that are over. I would give "break a leg" a whole new meaning if I tried those now.

This is stunning, I love the stacked effect and the glimmer of sparkle. Hope you have a good weekend, Hazel x

Oh my gosh! This card is absolutely gorgeous!

This card for your friend is so beautiful! Fabulous decoupaging!!Amazing design!
These shoes are really very height, I don't know how your friend could stay on them! :)

What a brilliant design, some great images and a rally super feminine card.

Another stunner Valery. An amazing design and the lady that it is for, is very lucky and I am sure will be treasured. So beautiful. Hugs Carol S.xxx

Such a different card. Thank you for entering our Anything Goes Challenge at Through The Craft Room Door this week. We hope to see you again next challenge.
Smiles, Angela DT Member
TTCRD DT
https://chasingwhiteunicorns.blogspot.com/{My Blog}

Beatiful card Thank you for entering our Anything Goes Challenge atThrough The Craft Room Door this week. Looking forward to see you again next challenge. Good luck GinnyMy Blog As I do Rodos

This is so pretty, the vintage colours are lovely and the corner arrangement very effective.

So beautiful and great dimension..
Thank you for sharing with us over here today at the Classic Open Design Team Challenge and best of luck with your entry.

What a great idea! It's beautiful! Thank you so much for entering our Challenge at Crafter's Castle this week. Good luck!
Blessings, Jeanie Ellis DT
Crafter's Castle
crafterscastle.blogspot.com
Scrapbookingmamaw MyBlog

Your card is beautiful! I love the colors and that stacked corner is awesome! Thank you for sharing it with us at Always Fun Challenges! Cyndi, DT

Thanks for playing along with us at Aud Sentiments,