What a Day. Realized late last night that I was going to be 20 odd cards short of my total needed. Set to and made/completed 18 which are for old school friends and Family all of whom would expect nothing less than a handmade card from me. I even surpassed myself and decorated the envelopes (which I also made) with matching stamped images.
Here's  just a few of the envelopes going in the post tomorrow. 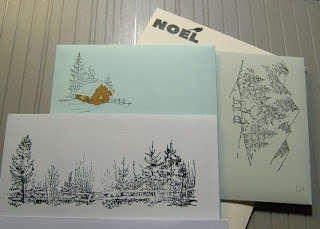 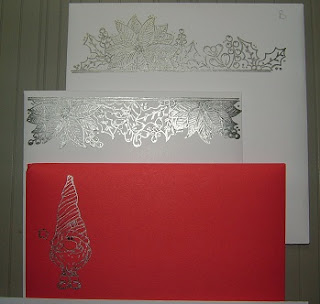 It is time for the girls in the Christmas Card Club to show our last cards for the year.  Rachel chose Humour as the theme but I'm afraid I have had to fall back on the option of Anything goes and show two cards that I managed to finally get finished for cousins who don't see my blog so ok to show before they will be going in post on Monday.
I  brought these home from a recent Julie Hickey workshop I attended and finished them as I didn't like what I had done to them in the class so they needed tweaking. 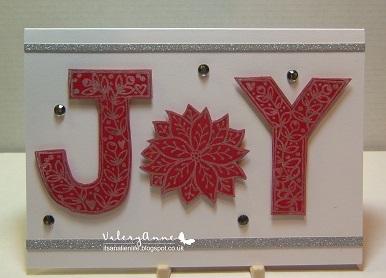 The stamp set used is called Festive Joy JH1022 by Julie Hickey.  We had inked up the stamps using white pigment ink but I thought it looked rather flat so I have gone over it using a silver gel pen and now it has a lovely sheen against the red. I fussy cut the images out and adhered to the card using 3D pads for dimension. The gems were also added by me from my stash. 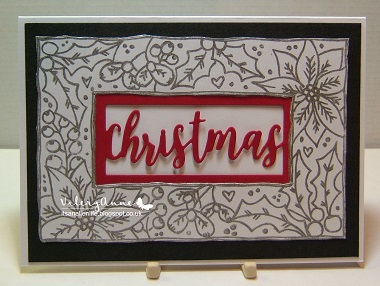 This one uses Julie Hickey's Christmas Frame JH1026 and Christmas Frame Word Die JHD-CUT-FR002
We had inked up in black ink which again I thought looked a bit flat even against the red wording.  I fussy cut round the image and also round the aperture in the centre of the card.Die
I went over the design using my silver gel pen and now happy with the resulting card. I had die cut the Christmas from a larger piece of red card and was able to centre it and pop under neath the image before attaching to the black card stock and then onto the card base.  This one is going to a cousin who is only just having her second christmas since losing her husband to a brain tumour so I still did not want to send her a too merry a card. I think this will be just right.

Congratulations Mrs A, a super batch of cards and envelopes, especially love the JOY card, bet you had a load of help from your know who.

Lovely cards ValeryAnn, especially that last one with the fabulous border-frame and the lovely shadow cast by the word. CarolG

Beautiful cards and love the decorated envelopes too
Carol x

Wow that was a mammoth card making session, well done on getting all your cards done in time. Two fabulous cards for our challenge this week too.
Wishing you a Merry Christmas and a Happy, Healthy New Year!
Lorraine

You have been busy. I like both cards that you shared and agree that the silver gives the cards an elegant look. I hope that Little L'th was helping you while you were making those cards and envelopes as that is far too long for him to be unsupervised!

Two fabulous cards, and love so much your handmade decorated envelopes!! It's a thing that I never do, but really adds a professionally look!
The Joy one is my fav, such eye-catching!
Hugs

Fabulous cards Mrs A and I'm impressed you even found time to decorate the envelopes too.
Kath x

Hi Mrs A your cards and envelopes are stunning. I haven't counted my cards yet but I do think I am short. Have a great week. Take care. Hugs Jackie

OMGoodness, these are absolutely gorgeous! Your old school friends and family members are going to be well pleased when these beautifully decorated envelopes arrive in their mailboxes! Gorgeous cards!

Great looking cards....I'm sure everyone will love the cards your going mail out...they turned out fantastic...Merry Christmas

Absolutely gorgeous cards Valery, beautifully designed and lovely colours.
I love your envelopes too, it's something I always mean to do, I never get round to it,Kate x x

Now I AM impressed...18 cards in a day AND posh envelopes too! That is some going Mrs A! Good job you thought to give L'th that book to read, at least it kept him quiet and out of the way!
xx

Good grief, it is bad enough having to make the cards let alone making and decorating the envelopes too.
Well done you though, great cards and lovely envelopes. Oh I have just realised that you will have had a really trusty helper to get these done, lucky you.

Beautiful card Mrs.A...love the red. Thanks for joining us at Sweet Stampin. Pat K xx

A big pat on the back for getting them done and decorating the envelopes too!Your cards are just so adorable l love everything about them x

Wow 18 cards in one evening I’m impressed! I’m afraid I cheated when I realised I was going to be short and bought a pack. They went to people who don’t really appreciate hand nade cards! Yours are lovely.

Well done, original, love it
Thank you for sharing with us at the Brown Sugar Challenge

Two lovely cards. I'm sure your cousins will be delighted to receive them. Sorry I'm late. xx

Very impressive with all the decorated envelopes, now I am thinking I best not mail my cards yet and decorate the envelopes! Beautiful cards, especially like the Joy one.

Well you've certainly been busy.... your cards and envelopes are gorgeous xx

Hi Mrs A love your cards and wow those envelopes look awesome,well done my friend on your beautiful work xx

Great job! TFS it with BSChallenge~

Beautiful Christmas cards
Thank you for your entry at Scrapping4funChallenges.
Rachelle DT
https://scrapping4funchallenges.blogspot.com

Very lovely cards and I love the envelopes too. Thank you so much for entering our Challenge at Crafter's Castle this week. Good luck!
Blessings, Jeanie Ellis DT
Crafter's Castle
crafterscastle.blogspot.com
Scrapbookingmamaw MyBlog

I always mean to decorate the envelopes and never do. It doesn't have to take long as you've shown. I like the simple colours of your other cards. Thanks for the card you sent. The glitter on vellum is very pretty. x

Wow, that’s a lot of silver pen line work, Mrs A, I’m really impressed.
As someone said recently if you don’t like it, it’s not finished too often people stop too soon, it’s a progression of design! Look great both of them, persistence pays off.

BTW your lovely hand made card arrived chez moi yesterday and am popping over to thank you very much and also huge thanks for your challenge this year, going to try better next year, but struggle with fairies elves mind you I’ve neglected stamps so shouldn’t be! Bad me.

Happy Christmas and every blessing healthwise esp on shoulder in 2020. I blogging for first time in over month tomorrow for WOYWW too, just scheduled it.
Thanks for being a blessing, and may God bless you too.
Hugs, Shaz in Oz.x

Thanks for joining us at the Merry Little Christmas Challenge Blog and Happy New Year!

Thank you for sharing with us at 'Winter Wonderland' this month
Hope to see you join in with us again real soon!
Hugs Shell xx