What's Up Doc! Plenty at the moment. I got bitten on the legs (thankfully not tics) whilst out in the garden but my legs within hours flared up and I lost sight of my ankles. I have pills specifically(from the Dr's) for just such occasions so started on a course of those straight away and smothering legs with insect bite cream. These two combined generally keep bites under control but this lot ( 7 in all, probably because of the extreme heat we have been having) got straight into my blood stream. At one point during the weekend you could have fried an egg on my left leg it was so hot to touch! I now have a steroid cream  (from the Dr's) to put on which has already brought the redness and size of the bits down drastically. Have been trying to keep my legs up and no weight on them (and apart from feeling lousy with it all)  also out of my craft room.
Hence I'm late again for the Christmas Card Club's latest show of cards. The theme was set by Margaret who asked to see Christmas Choirs or Carol singers.
I knew I had used all of the appropriate old card fronts up in my stash so resorted to looking through my digis last night and came across this digi from Beccy's Place  which is pre coloured (thankgoodness) and called The Three Tenors!!
I have gone with  funny style to make these cards so hope you will like my interperation Margaret.

On this first card they are singing Jingle Bells but not necessarily all in tune! 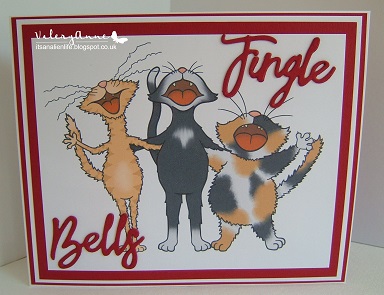 I have used white cardstock to make a base card up and then layered with dark red more white and red and then finally the digi image .The sentiment is a die cut  from Xcut which also comes with a small cat bell style die which I cut twice and adhered on the inside of the card which is also layered up. 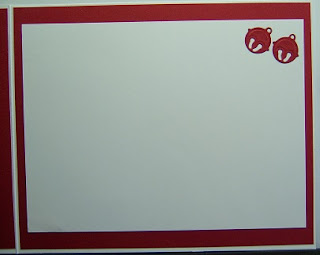 On this next card they are lustily singing We wish You a Merry Christmas . Cats standing on a hot tin roof springs to mind!!
Again I have made a white base card up and adhered a dark red cardstock to it. I attached the digi to the lower part of the card. The top is a Tonic Studios Header Fold Die which I have cut in one piece (it comes as two dies)  from the dark red card and attached white card behind  and then glued to the top portion of the card. 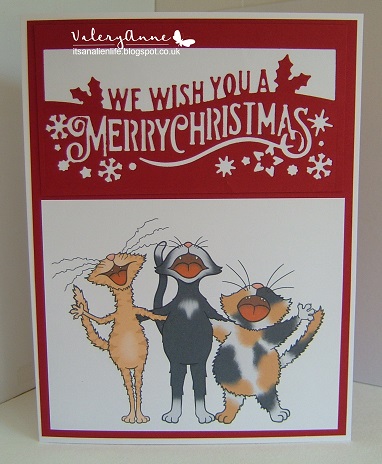 I did find another digi image to use but it took me so long to make these two that I will save for anotheer time.
Appoligies for being late Margaret.

Those bites sound really nasty - poor you.
Love your cards, that image is fabulous and I love your take on the theme.
Great designs with the dies too.
Hope the legs/bites heal up quickly.
Avril xx

So sorry to hear you've been bitten and had a nasty reaction - hope things improve quickly. These cats are fabulous and certainly raised a smile here.

Sorry to hear about your bites...sounds horrific x
What fun and fabulous cards, both of them and what a unique set of 'Tenors'. Loved the fun idea for your two Christmas cards x.

Super fun image and two lovely cards, like the second one best with the lovely die, just because I thought the sentiment on the first one said Fingle Belly, kidding.
Sorry about your bites, sounds to me like ants, I had the same thing but I was bitten on my hand, burning and swelling and painful too, went to Dr's, he gave me cream and tablets and said the next ing you must do is either go to the hospital or to a jewellers and get your wedding ring cut off or tomorrow you will have to have your finger cut off, needless to say I had the ring cut off.

Well done though with these cards.

Love the image on your cards. Brought a smile to my face. Hope you are on the mend now. Christine x

Oh, I'm so sorry for your legs! Hope that they are going better now!
Both your cards make me laugh!!! :D I love cats and these unusual and pitchy carol singers are too much fun!!
Take care!!

Hope you recover soon from your bites, it sounds like a really nasty experience. Love your cards, I have this digi stamp too and I love how you've used it. xx

Hope those legs have settled down, I always get bitten by mozzies the minute I am in the garden, lots of tropical plants I have.
Fun card with those cute crazy cats.xx

Two fabulous cards using this fun digi image Valery. I hope your legs improve soon and you start to feel much better. This heat is getting to me now, I'm wishing for some rain and I never thought I'd hear myself say that! Take care.
Lorraine

These are both fabulous Valery...what fun images...they really made me smile...I am glad your feeling a bit better and hope the bites and your legs get better soon....we had a cool night last night and it’s a pleasant day today we even ventured into town ..all we need now is some rain,my garden is parched ....take care xxxx

Oh No, your poor legs. What a terrible thing to happen. I hope they are back to normal now. The Three Tenors name just cracked me up even before I saw the cards. The tenors are adorable and both cards are so very cute.

Wishing you better days with your leg...some bites can be pretty bad.
Your cards are awesome when I scrolled down and saw the three cats I had to chuckle....thanks for sharing.

Oh poor you Valery, hope your legs are back to normal now. I think you've hit the nail on the head saying it's the unusual heat that's causing these nasty bugs, I've got two massive bites on my feet and Alistair who is never bothered by them has bites all over his neck.

Oh dear, I do hope you are feeling better by now- That sounds horrible. Take care and rest. Love these cats, they are brilliant.

Oh dear Valery Anne, so sorry to hear about your legs, I hope that they are soon better. I love the gorgeous image that you've used for these two fabulous cards.

This is way too cute!

This funny card brought a smile to my face and I couldn't help but imagining a lot of caterwauling going on in the back alley with these rascals! It sounds like you have a severe allergy to whatever bit you and I'm glad that the steroid medication is helping bring the swelling down. Ouch!

Great cards Mrs! And my guess is that Saturday didn't do your leggies much good! Pleased to read later that you're lots better. I think you may have to avoid sitting in your garden unless you're kitted up in a bee keeper's outfit! :)

So sorry to read about your bug bites - the same thing has been happening to my Mom when she gets a bite - she has to use the steriod prescription cream - I can't even imagine seven of them! I hope they are healing by now. Your carolling kitties are adorable!

These critters are so fun. Thesen are such cute cards too!

Well done of you to get these made while suffering from those bites. You had quite a reaction...take care, Valerie Anne.