It was time again for the girls in the Christmas Club to show our latest makes. I had my card made and then couldn't upload the photo of it until now.  Christine chose the theme of White on White or with just a smidgen of colour which is what I chose to do.
I found a christmas card front in my used box which was just right so here it is. 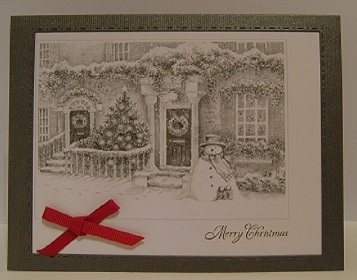 I used grey textured card stock to make the base card and cut a window from the front of the card with my Crafts-Too Rectangle Stitched die cut. I trimmed the card front down to fit and added the red bow. Cut matching silver card stock for inside of card to neaten. Very simple card which does look beter IRL.
I don't know what the problem has been but it started with a power cut last week which resulted in our near neighbour having a trench dug right across his front lawn and he now has a row of cones across it. The trench  is now back filled in but is still about six inches lower than the rest of the garden either side so hope that isn't the job considered done! Last night there was digging and drilling going on till the early hours of the morning in another part of the close behind our back garden. We dread seeing any GPO or Electric vans in our area as it generally means something is broken and more will be broken trying to fix the original fault. Certainly not been able to post any pictures to my blog for a few days.
Monday saw the second new front  door being fitted. I now have panels on the door but we still had a problem in that the door was delivered with 5 blank keys!!!  I can't even begin to work out the logic behind that one. We had asked for extra keys to be included in the price but didn't expect all of them to be blanks so a trip was needed by the installers to go and get the keys cut and then make sure they all worked. I do have to say that the installers have been brilliant and made a really good job of fitting the doors. The supplier of the doors needs a lesson though in before and after sales!

Hi Mrs A this is a stunning Christmas card. I love it. Take care. Hugs Jackie

Beautiful card, Mrs A. The image is lovely and I do like that bright pop of colour. Elizabeth x

A really lovely scene and love the touch of red.
You must be jinxed at the moment, just one thing after another, hope it passes PDQ.

This is gorgeous Mrs A. The little red bow really pops out. You poor thing; it sounds like a nightmare! Your catalogue of woes must seem never ending right now but let's cross fingers and toes! Take care. Christine x

It seems that you haven't good days in this period! Fingers crossed for a bit of peace!
Lovely Christmas card, your used box is full of treasures! :D
Hugs

A lovely card Valery...and beautiful recycling....
sorry to hear of even more frustration at your end.. it’s all worth it in the end...a nice new front door....xxxx

More drama! I hope there is no more damage and things are working for you. We are currently getting a new porch and front door so I'll be checking the keys!
Love this card, so evocative. x

A gorgeous image, it has a lovely traditional feel to it.

A great card, worth waiting to see it. I hope you don't get any more hassles - it's bad enough coping with the heat without added problems beyond your control. Blank keys?? whatever next.

Hi Mrs A ooh how l just love scenes like these and this is gorgeous! the ribbon and the edged stitching just finishes it off to perfection ... hope your enjoying this lovely weather although its a little overcast here today it's still dry and a nice welcome to be a little cooler take care xx

Hi Valery, you are certainly having a time of it, hopefully the drama will die down now and life will be more relaxed.
Your card is gorgeous, lovely traditional scene and I love the splash of red, Kate x

Lovely take on the white theme, I like the added bit of colour
Blimey more inconvenience, you must be due some good luck soon!
Anne x

Hi Mrs A,
you do have such terrible problems where you live.
You must have infinite patience.
Such a very lovely card and what a very pretty scene too.
Brliiant re-cycling.
Lots of crafty love. Jenny L.

Hi Mrs A. You have been having troubles, hope nothing more happens.
This is a lovely card and a great piece of recycling.
Just been catching up and I love the exploxion box in the previous post.
Avril xx

A gorgeous card for our challenge Valery, sorry I missed this post.
Lorraine

So pretty (apologies for being a late visitor) and it looks so vintage. Love the scene and your upcycling is always wonderful. Your ideas to use your box of cards always come up trumps, and this one is no exception. Good luck with the door...you have certainly been troubled with so many Murphy's Law problems on these doors! TFS & Hugs