As  I have used lots of  odd snippets of card below I'm  linking to Pixies Crafty Workshop # 327
I haven't played in such a long time. Slap on wrist.

I had a request for an 80th Birthday to be made for a friends Dad. The brief was to depict carpentry as that had been his profession.  I'm always up for a challenge so this is the card I made for him.
I decided to make the front of the card look like a workshed and used my score pal to create the tongue and groove effect. The keyhole was a brad from my stash. I created the door and window frame adding acetate behind the window. The windows were made using a small square punch. Hinges were made from brown cardstock and cut to  shape. The 80 numbers are from a Tonic numbers die cut. I cut out 3 times each one and glued together and then finally to the door. Sign says Dads Workshop which I created in word and printed out. 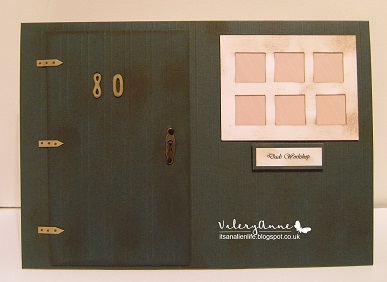 Here is the inside of the card depicting a carpenters workbench with all his tools of the trade + his trusty cat for company.  The tools are a stamp set by Card-io called Drills 'n'spills. I stamped them out onto white card stock using various colours of inkpad and a promarker for the detailing, then I fussy cut them out.  A few were too tiny to do that so I stamped them directly onto the work bench.
Tools hanging up are attached with french knots to represent the hooks they are hanging up on. Cans of paint are all stacked up and attached to the back of the card with 3D pads. Oops one of them spilt whilst I was doing that and left a stain on the wooden floor !! I used a piece of hessian for the mat on the floor and had a few bits of the string from creating the fringing so wound them into a small ball of string which is on the work top. Sentiment is by Woodware From their 'Just to say' clear magic stamp set.  The cat is from Gorjuss Ruby stamp set by Santoro. Oh and I left the door key on the workbench so who ever is last out can they lock the door please!. 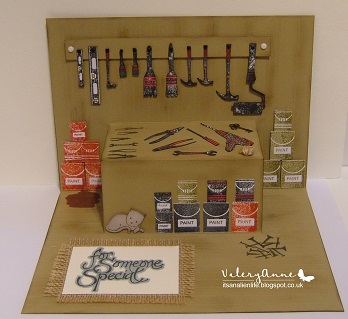 I had to make the card last month in time to give to my friend for her Dad's birthday  this weekend. She was frilled with it and said her Dad would love  it.

I'm not surprised this card was well received by your friend it is fabulous with so much attention to detail. Clever stuff!

Valery, this is just awesome. So much detail and he will love it. The front is perfect as a workshop and the pop up made a fantastic bench for tools. Love the paint cans and nails. Great card.

Oh my goodness I love love love this card. Your tools are so realistic and what incredible detail everywhere. Simply stunning and I’m sure the recipient will adore it.
Julie x

Gorgeous masculine card, Valerie. Perfect inside and outside. Kisses, my friend.

Mrs A this is absolutely fabulous, so many details on the front and then that fantasist inside. I'm sure he would have loved this - such a treasure.
Avril xx

You sure had fun making this one and really stepped up to the challenge. So unique and made with love. Absolutely love all the attention to detail and how wonderfully creative are you? One clever card...absolutely amazing x

Oh, this is such a charming card. The outside looks just like a tool shed and then when you open it up and see the fully outfitted workbench, it's a wonderful surprise. All the little details, including a textured mat, will absolutely thrill her dad.

This is absolutely fabulous Valerie, love everything about it.

Wow Valery what a fabulous card design, love the tools and design.

WOWSER!! What a corker of a card. So much detail and precision in what will be a very treasured card. Love it my friend!

Stunning card,Valery.Love the shape and so much to see on it and a lot of work too..Well done.

What a fabulous card Mrs A!!! love all the detail it's so great! hug Sue J xx

This is gorgeous. Love all the details.
Valerija xx

This is fabulous, that tool bench is awesome!

The detail work here is just phenomenal!! I thought I was looking at a photo at first! You knocked this one out of the park and over the moon!! Take a bow for this one :)

Oh My Gosh! The incredible imagination to conceive & carry out the creation of this card is just amazing. And the intricate details with the tiny little tools and embellishments. This has got to be one of your extremely very best cards, and I know you are justly proud of the finest result. I bet your friend just exclaimed in great joy when she saw what you had done. I'm with Carol: Baby, take a BIG Bow!

TFS the notification info. I was seeing the x box to notify me of comments, and checked it on the last 2 posts. One sent me notification of my own comment. But no others. The one on my recent birthday card post, hasn't sent anything...my own or anyone else's. I've changed from embedded to popup, and have a scheduled post coming up. So we'll see if it makes a difference. Appreciate your help. I hope it works! I see others are still having issues, but it sure is aggravating. (a lot of this possibly because I am so accustomed to 'the way I always did it'..) Hugs & again, what a stunning and unique card. Pats all round!

Fabulous card Valery
Love all the detail .. Any man would love that card...
Hugs Sylvie xx

I haven't receivedYou certainly deserve a gold star on Pixies Crafty Workshop, Mrs A!!!! Stunning card, full if interesting details and all made from snippets!! There are a lot to look at, here!! Love so much the idea and the whole design!! Well done!

I'm not surprised she was thrilled, this is an amazing card. It's a work of art!

WOW, what a fantastic card Mrs A! I can see why she was thrilled with it and I am sure her dad was extra thrilled to receive it!
Hugs, Sherry x
Loose Stitches and Unraveled Threads

I couldn't believe this incredible card when I saw it rightly featured over at Pixie's, Anne! It's completely blown my socks off! You should be submitting this to every crafting magazine in print and online as it is magazine cover worthy! I'm not surprised your client was thrilled with it!! Hugs, Darnell

Amazing card. I've never seen this cardio set before I think my fav is the spirit levels - the attention to detail you have achieved is just stunning.