A bit short on time so I only managed to make one card for the Christmas Card Club . The Theme was set by Sylvie who asked for Anything but Square.  I knew though that I had just the used card front in my christmas card box that would be perfect. Trimmed the straight edge very slightly and adhered to a dark green cardstock square base. Fussy cut round the fancy edge of the card. The original card had been one that flapped over so I left that part loose on the card but it is quite hard to see in this photo. 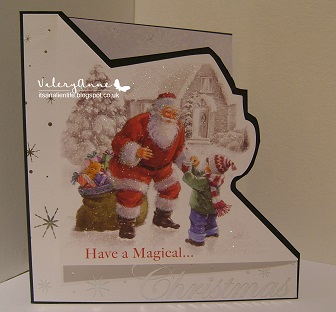 By a happy coincidence  I found a sheet of design paper in my stash that had an almost identical  Father Christmas image  on it which I trimmed down and attached to the inside of the card. The paper was a freebie in Making Cards Magazine December 2015 called Traditional Christmas.
Close up of the  paper. What do you think? 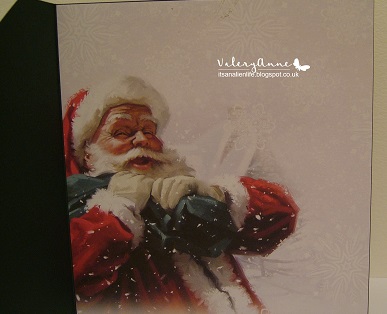 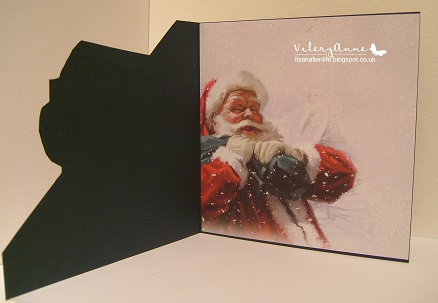 Just got time to see what the other girls in the club have made.

Hi Mrs A this is a stunning Christmas card I love it. Take care. Hugs Jackie

This getting to be a bind remembering to leave a commet in order to get notified of each post.

That’s so unusual Valery...what a clever idea...love that stunning image ....enjoy the rest of the weekend xxxx

Clever card and the matching Santa was a lucky find

Love this idea and your images are super Valery.
I agree about the notifications, it's getting to be a nuisance.
Lorraine

This is a clever take on anything but a square. I love the shape and the image inside is perfect! Great Christmas card.

I love your card....boy that was thinking outside the box....very interesting and eye pleasing shape...gotta love Santa cards...I know I do.

What a great idea on cutting around the image and having a matching image inside too....well done Mrs. A

Good idea Valery to fussy cut around Santa to change the shape of the card. Love the card you can't go wrong with Santa. Hugs Zoe x

Gorgeous is your card Mrs A and wow l just love the shape great image too! hope your enjoying this lovely weather it's so nice to get out and do the garden although it is stopping me from blogging so today is catch up take care x

What a cool shaped card and I like that you put Santa inside and out!

Super shape of card and two gorgeous Santa images with lots of sparkle.
Yippee it is raining as I type this, the garden certainly needs it and isn't it nice that it has come at night.
Have a good week.

Hi Mrs A
What a great idea for the shape. Very unusual and effective.
Best wishes.
Ang x

I think it is Just Fabulous! Your ideas on using your treasure box cards always amaze me. Clever to trim into this shape and how fortunate you could find a similar theme to decorate the inside too. Bet that was a bit of tedious fussy cutting as well. TFS & Hugs

What a fabulous shape this is...really draws the eye!!
Cheers
Dr Sonia

This is gorgeous Mrs A! I love the design! The image is stunning!
Valerija xx

What a creative shape you've made on your gorgeous Christmas card. Thank you for the wonderful inspiration x

What a great shape Mrs A, lovely image too. Carol x