Internet has been playing up big time again and only just managed this evening to get back on.  Good job I have some cards not shown yet as Mojo has gone on walk about as well.  These two were made last month for Anniversaries' in that month so safe to show now.
First one is for a Sixth Anniversary which the web tells me is depicted by Iron and Calla Lillies.
I had just bought this stamp from Studio Light which was perfect to use for the image. I coloured with my Promarkers  and then backed the image with silver pearlescent  paper for the iron element.
I used white ivory card stock and cut the frame  using my Crafts-Too Rectangle  Stitch hole dies PCD98. Silver stickers for the sentiment and the number from my stash. 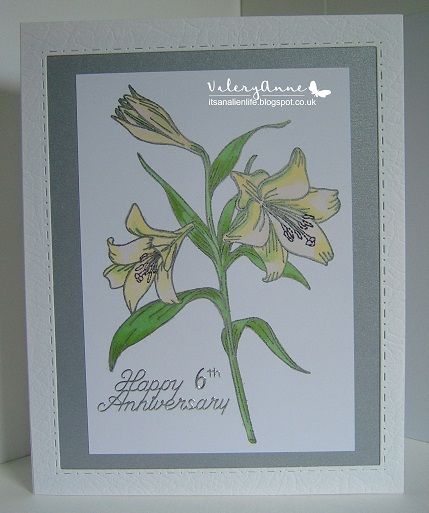 I used word to create a backing paper as the insert for the inside of the card and printed off. 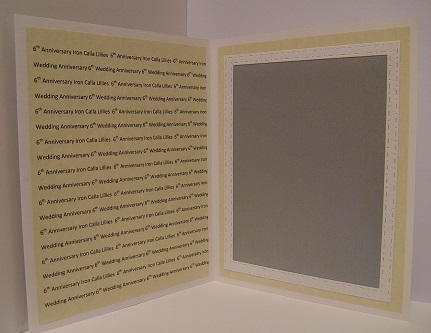 Second card was for a Fourteenth Anniversary which the web tells me is depicted by Ivory and Dahlias. This stamp is another by Studio Light and worked perfectly. I coloured with my Promarkers.
The picture doesn't show it but I have attached acetate in front of the image and sandwiched between the frame work. Card base is made using cream watercolour cardstock. The die cut frame is by Nellie Snellen  'Straight Dotted Rectangle'. Gold sentiment stickers from my stash.
﻿ 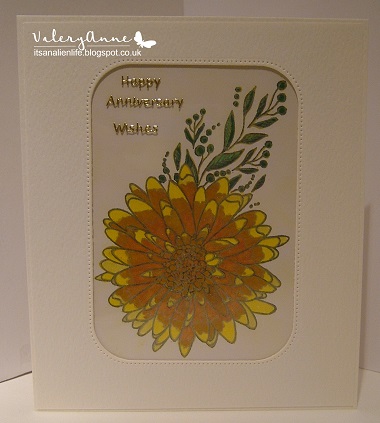 Again I used word to create a backing paper as the insert for the inside of the card. 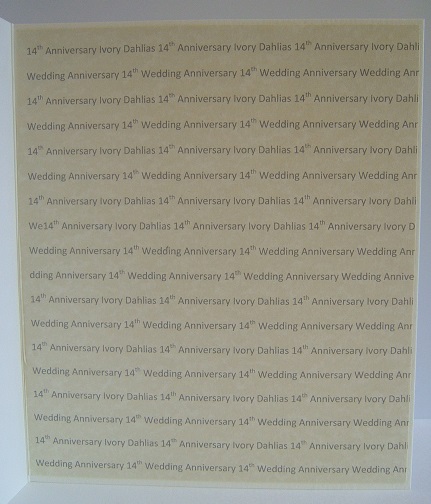 Beautiful anniversary cards, Mrs A. What a clever idea to make a backing paper in Word like this. It really personalises the card. Hope you get your internet sorted out soon, your problems have been going on long enough!! xx

Two stunning anniversary card Valery, I love the stamps and the dies that you've used. The backing papers finish the cards perfectly.

Two lovely anniversary cards! Love especially the second one with the acetate :) Brilliant idea creating personalized backing paper with Word!! Thanks for sharing!

Love the unique idea of the inserts on both of your beautiful cards. Both are beautifully coloured to and the images are gorgeous. Sorry to hear about the internet again x

These are both truly beautiful cards. The stitching around the frame on your first card is so pretty and the frame from Nellie Snellen is really fantastic.
Your coloring and shading is great on both cards. I know those internet problems are really aggravating mojo comes and goes so don't worry about that.

Awesome cards Mrs.A they both turned out fantastic...
thank you for sharing them both.
Good luck with your computer.

Hello, Mrs. A! Your anniversary cards are beautiful! I love how you personalized them with the backing paper you made - such a cool idea! Both cards are gorgeous! Love the stitched window in the second one! Hope your internet troubles get sorted out - I know how frustrating computer problems can be! Hope your mojo returns as well - I know what that's like too!

Your cards are so pretty Valery, beautiful floral images and so well coloured and designed, Kate x

Hi Mrs A your cards are gorgeous I love them both. I am sorry you are still having internet problems. We ended up going to Fibre when we had a host of problems. Take care. Hugs Jackie

Two really lovely Anniversary card Valerie, great to use the flowers of the Anniversary, must try to remember that idea.
My internet is not playing up but my computer is, driving me round the bend and the commenting is a huge nightmare.

Your details are what make your cards extra special. I love your extra page inside each card. Internet and phone issues are tricky and such a nuisance. Lovely week to you dear...xo

Taken note of the date and time, nod nod, wink, wink. Never been on Create and Craft before so better get up early and make sure I can find it.
Going Wednesday to pick my new glasses, had to wait till Daughter was free as I like to have her opinion.

Beautiful cards with these pretty flower stamps,Valery.Hope your internet problems will be solved soon.

Such beautiful cards and it feels good to be back to blogland and visit my friends...life has been too busy for me!!
Cheers
Dr Sonia