Here is some more inspiration for the current Butterfly Challenge

#96 Spin The Butterfly Wheel with the Letter N
For this card I have chosen to showcase the colour Napier Green and teamed it with the theme of Numbers. Inadvertently I have also used Naples yellow/ Navy/ Not Square so have in fact used 6 of the  elements from the wheel. 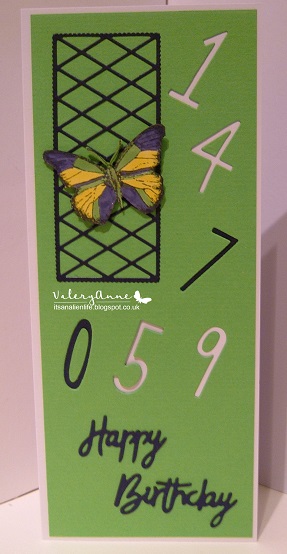 I have used white cardstock to make the base and then layered up with green card stock. Before I adhered the green I positioned where I would be putting the trellis work and then die cut randomly some numbers using Sizzix 661163 Metal birthday numbers. (Choice of numbers wasn't quite as random as I needed a 7 and an 0 to be in there as this card is for The Docs cousin whose birthday is on Friday). I put snippets of navy cardstock behind those numbers to not so subtly show the  age!
Trellis is a Tonic Studios die 'Parquet Trellis Set' and the sentiment has been cut twice and layered up using my Xcut Happy Birthday die cut. The stamped butterfly is the same one as shown on the Butterfly Wheel (though coloured differently) and is a Marianne Design from their clear stamp set CS0927.
There is still over a week to join in the challenge so I hope you will come and Spin The Wheel.

Great designed birthday card! Thanks for sharing it with us at Lil Patch of Crafty Friends!
Sandy DT

Wow! Brilliant card, love he design and how you used the snippets for showing the age of your hubby's cousin! A lot of inspirations here!

Love this Mrs A and the colours used are so lovely together great butterfly too! take care x

Hi Mrs A this is a stunning card I love the design. Take care. Hugs Jackie

A great card Mrs A, I like how you used the navy card to highlight the 70 numbers. A good colour combo.
Avril xx

thank you so much for playing along with us at alphabet challenges!

Nice work! Thanks for joining us at The Crafty Addicts.
Bye, Groetjes van Ine (DT)
http://creaine-cards.blogspot.nl/

Great design, I really like how you've used the numbers
Anne x

Fabulous card Mrs A, love the butterfly and design! Thank you for sharing with us over at Love To Scrap! Hope to see you again!
~ DT Sherry x

Beautiful card Mrs A, love the butterfly and the way you used the numbers! Thank you for sharing with us over at Love To Craft! Hope to see you again!
~ DT Sherry x

A delightful and clever birthday card. Love that trellis, the way you did the birthday numbers (gosh he's just a youngster!) and also the way you met all the "N" requirements along with the lovely butterfly! TFS & Hugs

Cute card! Thanks for joining us at Simply Create 2 this week.

Great card - thanks for joining us at Pattie's Creations. 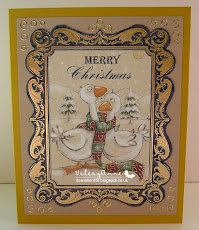