Here are my last two inspiration cards to show you for the current Butterfly challenge which still has a week to run and will finish on the 27th March. I hope you can come along and play. The more the merrier as the saying goes.

First Card using the last combination of  Light Blue and Lace from the wheel. I have also managed to add layers to the card and the sentiment counts as the letters.  It really is that  easy to spin the wheel. The papers are digital from an Etsy shop called PO and PO digital . The Base paper is a solid pattern and the top paper has the blank space in the design for you to add your own sentiment.  The stamp is by Woodware from their stamp set  'Just to Say'. The lace is actually a single picot edging that I have placed with the straight edges meeting and then covered with the blue dotty ribbon to hide the join line. The top paper has been adhered to cardboard and then raised up with 3D tape for dimension. Butterfly from my stash.  The base paper was attached to a blue cardstock base. 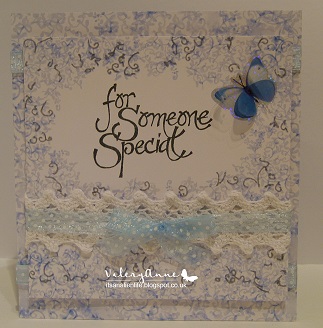 Second Card uses all seven elements of the wheel.

The base card has been layered up with lemon cardstock that the edes have been distressed using my edge chomper.  The next layer is an unknown paper that I acquired in a large pack of bits and bobs that a craft shop was selling off as they were no longer running a craft club on the premises.  The digi image just fitted the design theme on the paper . It is by QKR Stampede and called 'Birdhouse and Vines'.  I have coloured with my promarkers and a gold gel pen to match the paper.  I then had a heart in the mouth moment when I placed it in my Misti and overstamped with the Crafty Individuals script Ci - 161. Fortunately it worked. I adhered to cardboard for thickness and gave it the same distress edges and raised up on 3D tape.  The sentiment is from the same Woodware stamp set as above.  Again given the same treatment. 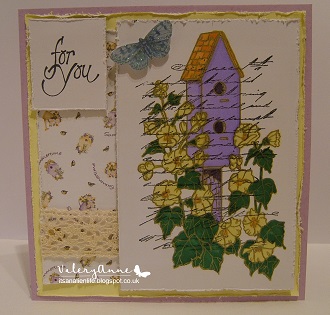 Your first card is for someone special indeed, so very pretty. Love how you over stamped the card with the script on the second card, scary moment that worked fabulously x

Two gorgeous cards Mrs A, love the colours and design on that first one xx

Both cards are so very nice. Great work!
Lia xx

Hi Mrs A your cards are stunning they are both so pretty. Take care. Hugs Jackie

Both of these are so gorgeous. Love the feminine softness on the lavender lace, and what a good idea to add the single piece and make it look double,covering the join as you did. Must remember that. Also like the layering effect. Of course #2 got my eye with the fab birdhouse, and great work on the script stamping. Turned out wonderfully. Again, loving the dp in the background layer, with that delicate lace. TFS & Hugs (you'd be a natural at the dirty pour acrylic technique too!)

Fabulous cards! So pretty and very feminine. I've been hurling loads of craft stuff out here - as well as putting bits to one side for the little ones in Germany. However, there's still a heck of a long way to go if I'm to get this place pruned down a bit! Maybe a fire cracker thrown in and then the door closed would be quicker!

Fabulous inspirations, they are both very pretty and love especially the first one, so feminine and delicate!

Two super cards, Mrs A. Love the pretty, feminine design of the first one and a great way to incorporate all seven elements of the Butterfly Challenge on the second card. xx

Both these are so pretty! I love them! Well done using all the elements of the wheel on card two. Hugs xxxxxxxxx

Hi Mrs A
Apologies for my absence but life sometimes gets in the way of the fun stuff.
A lovely duo and the first one made me think of Delft.
Have a great weekend.
Ang x