A new challenge has started  over on the butterfly challenge.
#87 Butterflies + V is for Vertical and /or the colour Damson.


So a vertical image or an added vertical element  needs to be on your project.

The colour Damson  sometimes called Damson plum is the dark-blue or purple fruit of a plum so there will be variations  in colour.

Here is my inspiration for you . On this first card I have used a Memory Box die cut called Tessatina  Border Style No 98302 for my Vertical element. I didn't have any plain cardstock the correct shades so I used white cardstock and then coloured the die cut using my Marvy LePlume II plum coloured pen instead. The background digi paper is from Crafters Companion Club Inpsire April 2016 and has shades of both plum and damson in the pattern.  The butterfly has been die cut from felt using the Memory Box
Cascadia Butterfly Trio set. The gem came from my stash.  The sentiment  is a Tonic Studios Miniature Moments die Happy Anniversary. Again I cut in white and coloured with my Plum coloured pen. 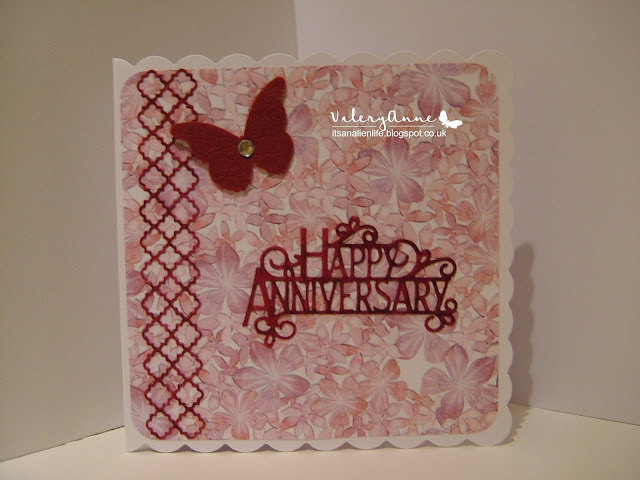 For my second card I have used a plain white card blank which I have adhered a pale green sheet of cardstock to the front.  The paper ,( surprise, surprise)  is a freebie from Making Cards Magazine June 2016 called June flowers. Again the flowers are in shades of both plum and damson. I have distressed the edges before attaching over the green card. The  image (which is my Vertical Element) is by Kaisercraft called 'Flutter' and I used Dew Drops Versa Magic 'Perfect Plumeria' chalk ink for stamping onto white cardstock. Ribbon, gem and the the paper flower were from my stash. The Birthday wishes stamp was a freebie from a magazine at sometime  but I have no makers name for it. 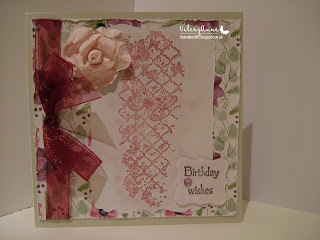 Hope to see you over at the challenge which runs for two weeks.

Two super cards for inspiration - I remember NEEDing that die once upon a time but to my shame it hasn't been used for ages so thanks for reminding me that I have it. Hope that things are returning to a normal pace for you, hugs.

Hi Mrs A both of these cards are gorgeous. I love them both. Take care. Hugs Jackie

Mrs A, you can make so beautiful cards! Congratulations!
Hugs!

So vintage and so beautiful, great colour too x

Gorgeous cards Mrs A, will definitely try to make an entry this time :)
Hugs Kaz xx

Love these cards Mrs A so beautiful huggles Sue xx

You make such lovely cars with pp paper and these are great ones. I love the colors of that plum and how you colored your own die. I like the distress look on the second card.

Two great cards, Valery. Especially the first one, with the butterfly, is my favourite. I love the vertical elements and the beautiful background with the flowers. Kisses, my friend.

Oh what beautiful cards Valery, I love the colours, such gorgeous papers and design, Kate x

Two beautiful cards! Love both and especially the first one with that sweet paper and the gorgeous diecut sentiment!

2 gorgeous butterfly cards. Love the way you've used the tessatina die, and on #2 card, the look over the white c/s, made me think you'd stenciled through the negative of the die on #1. So pretty. Love that pattern paper too,on each card, and of course the wonderful roses, and felt butterfly. Great use of some pretty freebies too! TFS & Hugs

Two absolutely beautiful cards! Both have gorgeous colours and design. Thank you for your kind comments and concern! Hugs xxxxxx

Wow, two stunning cards, love how pretty they are x

These are absolutely stunning, I'm catching up after vacation in Colorado (USA), hope to get back to your butterfly challenge this time or next! Hope all is well with you Mrs. A.

Two wonderful cards Mrs A and I love both the pretty papers, the first having those beautiful coordinating elements and a great idea to colour the die cuts to match, and then the distressed look on the second with the lovely stamping and cordinating sheer ribbon and soft pink rose. x