Well there's another fortnight just wizzed by again. Wish the buses came that quick. Time for the girls in the Christmas Card club to show our next cards. The theme was set by Sylvie who want to see 'The sentiment as the focal point' on our cards.
Rummage time in the used christmas card box turned up a few cards that I could use but I just chose this one and made it up into a quick and easy card as I'm now busy in the 'Elf Factory' knocking out Elves like they are going out of fashion! 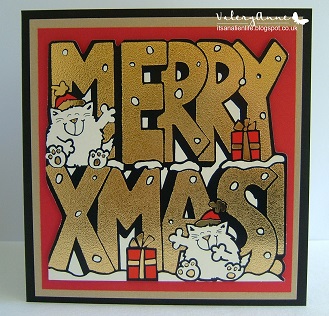 The card had been joined to its backing by the M and the X but I just trimmed round them to match the rest of the letters. Base card was made from black cardstock which I then layered up with gold and red cardstock to match the sentiment which was adhered on top using 3D pads for a bit of dimension.  One more card for the pot.

My second card  is one from a set I have just made. I was watching a video by Penny Black on You Tube but not having the stamps they were using or even the right ink pads I had to improvise with what I could find in my stash. (I have since bought the stamps and pads so once the Elves have been dispatched off to the North Pole I will be having a proper play.) 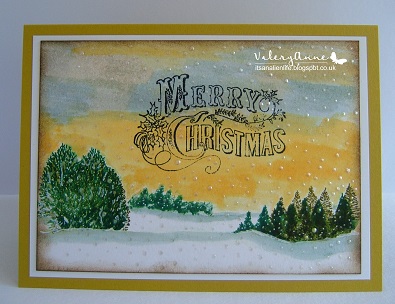 I have used watercolour card and created the background by dropping the colours from a re-inker bottle onto an acetate block and picking up the colours with a wet paint brush.  The trees are various ones. The large clump are by Stampscapes and the rest created using a Hobby Art stamp set given to me by a good blogging friend who found that she had 2 of the same .The large sentiment stamp is a freebie from a magazine. I created the falling snow by using white opal liquid pearls randomly dotting on card..

I'm entering this card only  into the following challenge:
Scraps of Life by scrappy Mo # October Rudolph day.
ABC Christmas Challenge # U is for Unlimited (the snow) and V is for Vibrant (yellow sky).
Crafty Hazelnut's Extra # Anything goes.
The Sisterhood of Crafters # I see spots (falling snow).
Fab 'n' Funky # 368 Christmas.
Crafting By Designs #  Get ready for christmas.

Two fabulous cards Valery, the first is such a fun image and your scenic one is lovely, well I like anything with trees. Brilliant sentiments, Kate x

You have so much talent. Valery!
The cards are so beautiful! Hugs!

The bold sentiment card is just AWESOME! Great that you found the right supplies in your stash of old cards. This one would have been a puzzler for me to recycle but as always, you come up trumps. Enjoyed your work on the PB inspiration too. Great job on the sky and I love that look. I so enjoy those PB videos. Your imagination on the supply front worked a treat on this one! TFS & Hugs

Such a great bold message on card # 1Mrs A in contrast to the lovely scene on #2. Two very different cards but both super. Hugs Christine x

Two fabulous cards Mrs A, love the huge letters and cute images on the first card and a super scene and colours on the second one.

Two super cards Mrs A, love how you've upcycled the first and great work with your supplies on the second. Carol x

Fabulous Christmas scene,love the water-coloured background, so beautiful.
Thanks for sharing with us at Fab N Funky.
Chris
x

Your first card is so cute, but I really love the gorgeous scene you created, Mrs. A!

Love both your cards, the first one is fabulous with the fun and cute cats, it makes me smile! And you have made a fabulous work with the second one, lovely water coloring and pretty dimensional snow on your scene!!

Two lovely cards, you have been very busy!

Two wonderful sentiment focused cards. The upcycled one is fabulous but the second inky one has captured my eye. Love the scene you created and the beautiful sentiment here!
Thanks for taking part in the October Rudolph Days Challenge.

Me again...have not received the stamp as of yet but we have been on a cruise a only back a few days. Our mail is at a large postal box for the whole neighbourhood, cemented to the ground up the block. As we pay bills online, we never rush to check the mail. Only about once a week
I will check tomorrow...

Hi Mrs. A, two wonderful Christmas cards, love the bold colours on the first with those little Christmas kitties, and the second card looks so serene... have a wonderful week... Megan
p.s. Thank you for your lovely comment...

Two super cards Vaelry, the first is really striking but of course I love your inky scene with thew soft earthy colours. Keep safe, wouldn't want to lose you under a pile of mischievous elves now would we.

Two great cards with sentiments as the main feature - different styles but I like them both. Do we get to see the elves when they are done??

Fabulous cards - great upcycling with the first one and a beautiful scene with the second.
Kath x

Two beautiful cards Valery, I love the recycled card and also the beautiful stamped one.

wow, both are amazing, I love big sentiments and winter scenes.
hugs xx

Oh wow, two great cards. I love the big bold sentiment in gold. Your scene is just beautiful. The watercolor with re-inkers is so pretty. Can't wait to see all the elves.

Fab sentiment card - but your scene card is AWESOME! Love it.

Hi Mrs A both of your cards are stunning. I can't believe how quickly the time goes now. Take care. Hugs Jackie

Hi Mrs A I love both these fabulous festive makes the first one really stands out the second looks so Wintry yet serene, top notch work
hugs
lorraine x

WOW! What a fabulous card Mrs. A. Love the scene you have created and the 'snow' ... great job! Thanks so much for joining us at The Sisterhood’s ‘I See Spots’ challenge and please come back again soon!
Darlene
one of the 'Sistahs'
The Sisterhood of Crafters
DAR’S CRAFTY CREATIONS Please come for a visit!

Wow they're two fabbie cards Mrs. A. I love the scene and the first is great fun. Barbxx

Hi Mrs A., Your first card is so adorable with those cats! I love the scene on your second card, beautiful!
Hugs, Sherry x
Loose Stitches and Unraveled Threads

Two lovely cards, that scene you have created is gorgeous.
Jane

I'm late on parade this time sorry. A fab couple of cards for the challenge Val, I love the scene you have stamped for the second one.
Lorraine

Two lovely cards Valery....love the first one! ...only just back home and able to do my commenting as we didn’t have wifi ....xxxx

Love the fun of the first card, but your second card is absolutely stunning x

These are both fabulous, the first one is fun and stunning, and the second one is amazing!

Gorgeous cards. Thanks for sharing with us at Crafty HazelNuts Christmas challenge extra this month :-)

Super cards and in particular the first which is definitely Sentiment Focused and fun with those cheeky cats. Sorry I'm late visiting. Zoe x 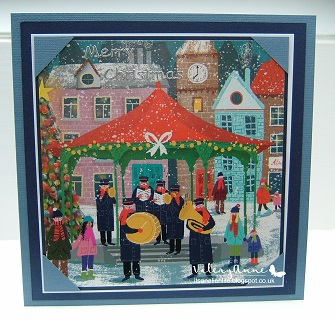