Another fortnight gone woosh knows where and it's time again for the Christmas Club Girls to show out makes. Carol set the theme of using  Non-Traditional  colours on our cards.
A quick rootle around in my used christmas card box found this first card which is what I can only describe as a Cadbury's Chocolate Box colour with additional flocking in the design. I had intended to use gold shimmer card for the base of the card but whilst running my hand through the pile of cardstock in my cupboard it stopped at this 'Moroccan Gold' which just screamed at me to be pulled out and used. 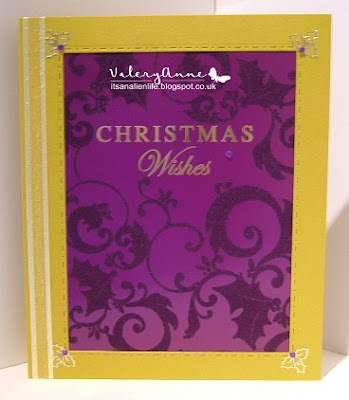 I cut an aperture from the front of my folded cardstock using my  Crafts-Too Rectangle die stitch hole. Timmed the card front down slightly to fit behind and attached. I covered the back with another piece of the cardstock for neatness. Yellow ribbon and the holly stickers  were from my stash. I found some matching Anita's gems and used them for the berries.  I had a slither of the card over so used it to decorate the inside panel which I have left blank for a handwritten  sentiment to be added. A few more holly stickers /gems and I delcared the card done. 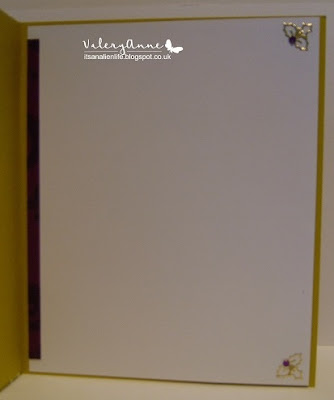 For the second card I turned my attention to my box of design paper which I had been resorting  and filing into appropriate colours earlier in the week.I remembered seeing  a snippet of mulberry paper in a pink/lavender colourway with silver embossing on it not dissimilar to the flocking pattern on the first card so pulled it out. It had been  a gift from a kind blogging friend and time to use instead of just stroking and admiring!  My Amethyst card stock looked perfect with the paper so I made another card base up the same as above.Again the dark silver ribbon. silver holly stickers and crystal gems were from my stash. The sentiment is a tonic Studios die which I have cut twice and layered for a raised effect. 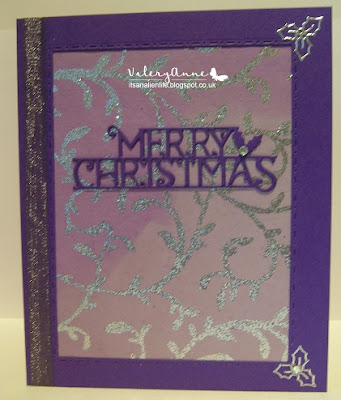 I had just enough of the design paper left to decorate the inside of the card along with another silver holly sticker and gem. 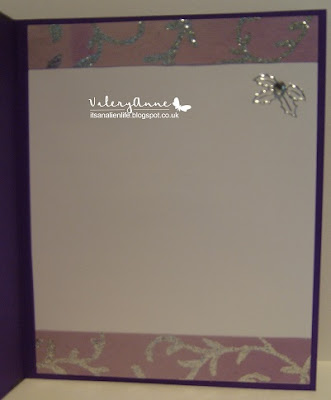 I'm off to see what the other girls have come up with for this challenge.  I'm late due to internet problems and weak signal strength.

You are so creative and clever to use and recycle Christmas cards. The Cadbury's chocolate card is gorgeous with the gold and the fabulous designer paper for the second card is perfect x

Loving these which are both quite opulent

Hi Mrs A your card is stunning I love it. We are having internet problems too. Take care. Hugs Jackie

What beautiful colors....I do learn a lot of new color names from your Challenge blog!!Hehe
Cheers
Dr Sonia

Two lovely card Valery you are so clever with your recycling ...great colours you have put together...xxxx

Definitely none traditional colours but they look fabulous, super backgrounds too.

A super pair of cards Valery, love the rich purple one.
Lorraine

Fab combo of colors, love this purple and both your designs!

These are gorgeous, they may not be traditional colors but they are top in my color choices!

Two gorgeous cards Valery, I love them both.

Two lovely cards Valery and I am really drawn to the rich purples and gold of the first.

Wow, this is elegant with the purple. Beautiful!

l love the use of recycled items and Mrs A your card is gorgeous lovely colours too! x

These are fabulous Mrs A...the first is so opulent with the gold and purple. Thanks for joining in and apologies for being late for your challenge. Carol x

Fabulous cards my friend, sorry been MIA with influenza.xx [aNNie]

These are just gorgeous x