Bet you thought I had run out of stories to tell well not so. This is one of 'The Doc's mishaps of which there have been a good few.
This one is going back a few years and one of the key characters to the yarn is 'The Wimps' Great Great Uncle Pugwash ( a white odd eyed  Persian)  that the Doc had a huge soft spot for.
Now at the time of this yarn we had a fish pond in the garden which had 3 Golden Orff in it which we had purchased  from the local garden centre. We chose Orff because of having cats as they are very fast swimmers and dart about. All went well for a number of years, the cats would sit and watch the fish and  because of the cat presence no Herons dared to enter the garden so the fish grew and prospered. Then came the fateful day when we arrived home from work to find one very dead Orff on the lawn and not a cat to be seen. The Doc was not a  happy bunny. Still we had 2 remaining Orff so all was not lost!  A few weeks later and we again came home to find another dead fish on the lawn. This was too much for the Doc to take and action needed to be taken so the following day after work he fetched a deckchair and his newspaper and declared that he was going to sit and  guard the last remaining fish and make sure the cats didn't get it. All was quiet  and I was busy in the kitchen when the Doc  let out an anguished cry. Our son who was upstairs came running down as he thought his Dad was having a heart attack and we rushed out  to see what was up. There was the Doc standing by his overturned chair with one very pleased as punch Pugwash smiling adoringly up at the Doc with the last remaining Orff firmly held between his front paws!!.

Here's the card to go with the story. 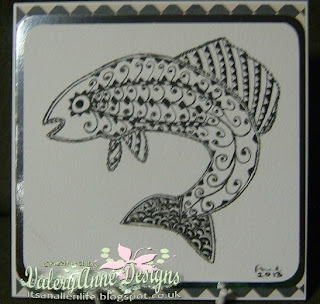 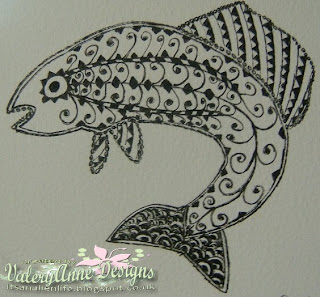 Oh my what a story! Poor fish...fab card! Thanks for joining us this week at Created With Love Challenges for our Anything Goes Challenge!
DawnD

Oh my goodness Mrs A your talents are really showing through with your stunning creation its totally fabulous!! not only a pretty face!! Oh what a great story and what a feast for Pugwash such a clever cat knowing once grown its a bigger meal so sorry for the hubby did you ever replace them?!! have a lovely weekend x

*lol* poor doc and his fish!!! =)
Love that card and the image is great! Have a wonderful creative weekend! Hugs and sunshine!
P.S. Congrats on your new DT spot!!!

Wonderful - I love it!

Thank you for joining this week at Artistic

Love
Co-Owner of at Creative

Very amusing "Doc" story Mrs A.
I looked after my Mum and Dad's Labrador for a few days one Summer.
I have a small pond with a few fish in too. We took the said Mutt out for a walk on a hot day and when we let him into the garden he just walked over to the pond and just slid in....we nearly died when he came up from the water like a bl**dy Synchronised swimmer with a fish on his head!!! OMG what are animals like..
Gorgeous Zentangle. I did some last week and started by drawing round my hand, it looked great and good practice.
Debbiex

Beautiful card. Thanks for joining our Anything Goes challege at Created With Love Challenges

Way to go with the Zentangle there Mrs A . . . it's FAB. Congrats on giving it a go. Very artistic of you.

Great story and a great card to follow up. Zentangle is so relaxing, isn't? By the way, I think you can only do those clouds on the silk art card. xx Maggie

Great story for us but not so good for the fish!!!

Love your zentangle...looks like a pro. The card is fabulous with this great drawing as center stage.

The George and Dragon worked out well. We sadly took the wrong turn and went through the village and everyone we stopped to ask had never heard of it! Finally one bleary eyed chap perched on a bar stool in a bit of a scary pub thought he knew where it was...his directions revolved around drive to pub A and turn and then turn at Pub B etc...then drive forever till you get to another pub which has closed and reopened as a restaurant. It looks posh and will have lots of posh people outside...then keep going and when it turns to one lane keep going till you see it!!! He was very funny! But his directions were spot on!

At the G&D,the son greeted us and took us to our room (overlooking the patio and grassy garden which was lovely) but found that the room had not been cleaned yet! He returned with towels and moved us next door saying he had got the room number wrong. That room had not been vacuumed or floor washed but the bathroom itself was clean and beds made. He advised go for lunch and he would get the floors done.
Got settled and went to get lunch (which was delicious) and he came over and said he had really made another mistake and moved us again to the back which is not as nice as no patio, a few of open sheds full of garbage and a machine thingy making buzzing noise.
Oh my!

I told him we would gladly take the second room and just give me the vacuum...teehee. He returned again and said the second room with patio view was now ready and moved us yet again!!! Mr Scrappymo fell asleep from all the moving! teehee

All meals were delicious, the rooms are beautifully appointed and the pub was warm and friendly.
I thought the owners were lovely. I think they were Paula and Lionel. I loved the arial photos on the wall in the pub, depicting all the work they had done to create the rooms annex.

Sadly the pub is almost deserted and yet is really lovely. Bathrooms in the pub are superb. Reviews mostly state the same...can't figure out why it has so little pub and food business except no one seemed to know it was there. I think they need something like the hotel inspector to show them some ways to get more business.

The only negative I can think of is the son has a very surly, sort of offhand manner and never says sorry! There was a bit of a set to between Paula and the son over the DIL so I think she knows there is a slight problem and tries to deal with it. Perhaps he contributes to the lack of local pub trade.

Those that did come for a drink seemed lovely and appeared to know the owners well!

We were delighted to find out about the quick access from the other side of the road and used that to come and go for all future outings!

We were glad to have beautiful rooms and great food and drink so close to Highclere for such a reasonable price. Thanks you for your recommendation.

Love your story, but poor fish.... Fabulous zentangle fish card, love the design. Thank you for joining us at Artistic this week. Abbie xx

Pugwash should have been renamed "Patience" for waiting til the fishies were too big to scoot out of the way fast! Poor Doc! Did you try again with tiny speedy fishes that STAYED tiny and speedy?

Your Antangle is fantastic, Mrs. A! Quilling next, then, right? Hugs, Darnell

Lovely Antangled fishie there Missus - and I did giggle about Pugwash. A wise cat that one - can just see the Doc's face too :)

What a story, beautiful card!! Thank you for join us at Created With Love Challenge this week, hugs Kate (DT)

So love how you tell a story and then create a card to go with it. Fantastic. Those Zentangles are on my list to do. Yours is terrific

Mrs. A., quite a fish tale with a zen of a tangle...ahhhh..yeah, it's corny and here it is late...LOL!! I love your zentangle - it's gorgeous; you've mastered that, haven't you? I envy you your talent, lady! Your blog is filled with wondrous talent and lovely tales that delight us all! How wonderful it would be to sit in your company, sipping tea and listening to you for days on end - it would be delightful! TFS! :-)

What a fun story and card to go with it. Very neat zentangle, thanks for sharing with us at ABC Challenge Blog this week

This really is great Zentangling! :) x