This really is a left overs card from making a couple at the Weekend that needed to get sent to Australia today.  Can't show those two at the moment as they are destined for a swap and do not want to spoil the suprise before they are seen in real life. I can say  though that the theme for the swap was to use a die cut shape on each one.
The butterfly is part of a two piece die that I have begged, borrowed and stolen from Fluff in the past but she finally relented and gave it to me as part of my Chirstmas present. Yay!!!
I love this die to bits  so all I can say is watch this space in future months. 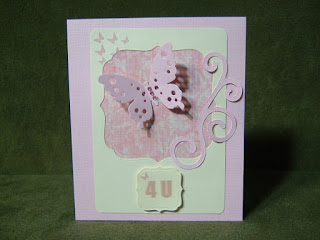 It was a joy to get back  to using Pink after the last few cards being in blue.  The tiny,  tiny butterflies are acutally what gets punched out from a Tonic Studios border punch that I have. (Well you didn't think I was going  to throw them out did you!!!!)  After glueing them + my fingers + anything else I touched I managed to get them stuck on the card.  Sentiment was created in word and printed out onto cream/ivory paper. Again the shaped window is what was left from cutting and using the inside shape on another card. I added a  few gems to the butterfly to mimic the design of the wings. The pink paper underneath has a swirl pattern on it that the die cut swirl reflects in mirror image which you can see better in the close up below.
﻿ 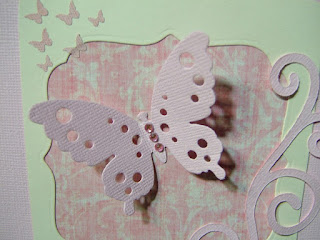 Entering into the following challenges:
Glitter n Sparkle: Sentimental.
Challenges 4 Everybody: Anything Goes.
The Squirrel & The Fox: Anything Goes.
Pixie's Crafty Workshop: Use your Snippets #56
The Ribbon Girl: Pink & Ivory.
Created with Love: Anything Goes.
Cute Card Thursday: Diamonds are Forever.
UnstampaBelles: Use one or more Dies.
Card Crafter's Circle: Layers.
Make it Monday: Paper crafts # 124
﻿
Posted by Mrs A. at 23:26

Beautiful! Love the colors and the intricate butterfly! Thanks for joining us at Created with Love Challenges.
Lisa O

You did an especially great job considering that you and your fingers and everything else were becoming attached!

You are a challenge Queen, Mrs. A!! I love your sweet pink butter fly card!!

(I expected a few snorts about having two bathrooms. I know it's a real luxury in a lot of areas in the world, even tho by American standards, our house is very small!)

So Pretty in Pink. I adore the blinged butterfly. Creative Hearts are Happy Hearts...

Very nice - those little tiny pieces can be very tricky cant they!

Gorgeous colours and loving the butterflies . Don't envy you sticking all the tiny ones. Thanks for joining us at glitternsparkle hugs trisha x

What a lovely card, great to see you save your left overs too!!

Thanks for playing with us at The Squirrel and The Fox.

Hello Mrs. A. How beautiful and so very delicate. I love the colours and the butterfly is the perfect embellishment. Thanks for sharing at Created with Love.
Sandra xx

This is so sweet Valery Anne ! I love the little butterfly and the beautiful flourish ! Lovely colours too ! Hugs, blessings and love from Catherine

Ah,butterflies - just about my favourite image for any craft project! And well done you for using left overs so beautifully. Wish I could train myself to do the same.

Absolutely beautiful Mrs A - being pink makes it 110% of course. Love all the detail, and that die really is gorgeous.

I love this card. Can never go wrong with butterflies. Thanks for joining our Anything Goes Challenge this week at Created With Love Challenges

So pretty...love the rhinestones on the butterfly! Will have to copy that! :D
Thank you so much for joining us at Make it Monday this week! Don’t forget to leave a comment for another entry and mention you saw them on MIM for a chance at our second prize! Good luck and I hope to see you back soon!
Rene ;D

Oh I love this it is so feminine looking and I love butterflies as well. Great job. Thanks for playing along with us at Created with Love challenges.
Linda K.

Gorgeous card Mrs A, love the tiny delicate butterflies and the feminine colours.

So elegant and the butterfly is a nice touch. Saw this on MIM and had to come over for a closer look. Hugs Desíre {Doing Life - my personal blog}

This is so lovely Mrs A, gorgeous butterflies and beautiful colour too and layout xx

Very pretty card. I like how you used the little butterflys as well. p.s. My doggie shouldn't grow much bigger now, but she thinks she's a rotweiller!!

Your card is lovely. Love those tiny butterflies together with the larger one - very decorative indeed!

Gorgeous card Mrs A and so pretty in pink, the butterfly is a really pretty design and hats off to you for being so patient with the teenie weenie ones :) Donna ♥ x

absolutely beautiful!
Many thanks for joining in the
♥Cute Card Thursday Challenge♥
this week! Debxx

Very pretty Mrs A!
Have you made the Snow Donkey yet? Plenty of snow here if you want some!!
xx

If this is just the leftover bits I can't wait to see the other cards. Lovely work. :-)

What a sweet card...love that filligree butterfly punch and flourish!
I like to save the cutaway bits from borders...I have teensy plastic/acrylic envelops I got at Daiso (Japanese $2 store). They are perfect for storing teensy bits like that. I bought a bag of 100 a couple of years ago and still have tons left.
Glad to hear your purge/sort went well...I have been redoing my craft room. I had done it before surgery with everything up at waist level as i couldn't bend for several weeks. Now I am OK'd to bend to I have reorganized it yet again! teehee
I had to label everything as I wouldn't remember otherwise!!!
I am finished in the room itself but now need to tackle the closet under the stairs which my overflow crafts spill into:(
Must remember my mantra...one drawer at a time...

I love all these butterflies and the flourish! You have a lovely and generous friend.

I can see why you were begging. That butterfly is fabulous. It looks wonderful fluttering on your card. Butterflies and sparkle two of my favorite things.

Gorgeous card and hope it gets here to Australia in time for who ever...love your two underneath too which I have not seen...fab cards..luv annie

Such a pretty card. I love that butterfly and you've framed it so beautifully. ann y.

This is such an adorable and sweet card! Love the soft colors and pretty butterfly! have a wonderful day! Hugs and sunshine from an extremly cold sweden... -18 brrrr...

Well we both know who's gonna just LOVE this pink and pretty card don't we!

Pretty! I have a Memory Box butterfly die that has offcuts about the same size, and yes, I keep them to stick on other projects too! That wavy trimmer I have that you liked the sound of was on my desk last Wednesday, WOYWW 189 post, if you want a gander at it. It's by Creative Memories and I bought it off a girl at work who had no more use for it, for $5!!

That butterfly is very pretty with the flourish!! ;-) xx

No word games today to keep me up half the night but a very pretty card! Isn't Fluff lovely!!! BTW - I sent you an e-mail...
Hugs, Lesley

If you want a proper SplodgeAway mat, this is the link. If it does not work, have a look on my blog for the logo at the top left, and click on that and it will take you directly to their blog site. http://www.splodgeaway.blogspot.co.uk/
Your little butterflies must have been horrendous to handle and stick, but very well worth the effort. Have a good week and enjoy your mat when it comes. By the way, they do three sizes - A3, 12x12 inches, and 8x8 inches. Just choose the size hat will fit best on your work table. I have the 12x12, which is fine for what I want. There are ideas on their blog of how to use it and all the many uses it has. xx Maggie

Gorgeous, I love pink! The butterfly is such a must have (could you let me know the make please) as I think I must have it too!

lovely card, very pretty pink thanks for joining us at Glitter n Sparkle , best of luck with your entry

lovely card, very pretty pink thanks for joining us at Glitter n Sparkle , best of luck with your entry

A beautiful card, I love all the little butterfiles and the pastel pink colour.
luv
irene
xxxx

Beautiful card and I can see why yo love that butterfly, I bet you were very excited when you opened it. Hugs, Amanda x

I hope you aren't trying to curry favour with Miss Di by using up your pink snippets LOL!!!

A gorgeous little make. Love that butterfly very much.

Hope all is good with you.

Thanks for your nice comment. I saw you on MIM too, ...your card is so lovely with this gorgeous butterfly.

Back again....glad you have entered this into our Dies Challenge at Unstampabelles. :-)

Pink is a really nice colour to work with, happy and gentle. You are like me, we don't waste a thing. Butterflies are wonderful. I wish we had pink butterflies floating round the garden. Do you think if there were pink butterflies they would have pink caterpillars
Xxxxx