Not posted a WOYWW for a while due to ill health. Now on the mend but still sound like a honking swan when I talk.
This picture of my desk is actually taken Tuesday morning but I wanted to include it for a reason.
I recently entered the Button floozies Altered Autumn button tin swap. But sadly my partner did not acknowledge receipt of her tin or send her swap to me. When Laurie the host for the swap found this out she very kindly (unbeknown to me) made and sent at her own cost from USA this super decorated tin and buttons. I love all the buttons that are in the tin but the five I have selected in front are my favourites. Hope you can zoom in on those as I couldn't get in any closer with the camera lens without it going blurry. When Laurie told her friend about it she also wanted to make me a a tin( before knowing that Laurie was going to ) to send to me so Jeanelle thank you so much for your sweet thought and lots of hugs to Laurie for making my day for me. 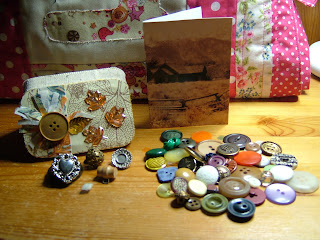 So whats on my desk today. I'm really behind with getting one project started and finished. The squares have been hanging around for about 2 weeks now though I have sorted them out into the layout I want to use . They all need hemming and there are 48 in total to do. The knitting is in conjunction with the same project. There are 6 finger puppets on the pattern. So far I have managed to make the duck. Very fiddly as there are only 16sts altogther and you knit it in the round. Started on the elephant but have now realised in order to increase for his ears I need to be working with 5 needles in stead of 4 so need to do a quick change over. 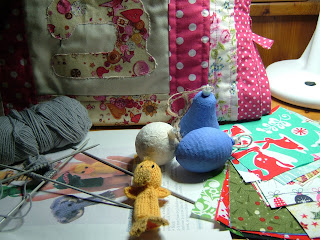 The two blue and one white bauble are an experiment. I was going to throw a load of tacky baubles out last year but hung onto them instead . These are some that I have covered with small pieces of kitchen towel and pva glue and dried overnight in the airing cupboard. Iv'e painted two blue and waiting for them to dry out again before I go onto the next step. (To be honest I'm making it up as a go along!!)
Pop on over to Julia's blog for some more desks to have a good nose and poke around. Thats where I'll be later on today. Might even see you there.
Posted by Mrs A. at 08:16

Made in Suisse said...

I share your love of buttons...I could spend ages sorting them out in little jars and looking at them. I don't think I'll ever run out of buttons with my crafting speed lately...

Sorry to hear you had a bad swap!! But how wonderful of Laurie to send you a beautiful box of buttons :)
Looking forward to seeing what you do with the baubles ;)
Hope you feel better soon Mrs A!!
Jan x

Hi there. Thanks for letting us peek into your creative space this week. It's always inspiring seeing where and how we create! Hope the rest of your week goes very well for you. I find it sad when things like that happen as I think that if you sign up for something you need to follow through with it. I've experienced the same thing with two people saying they were doing something for me but not doing it. Oh well, that's life; As long as I keep my end of the deal I can hold my head up high!
Neil #31

How lovely of Laurie and her friend to do that for you - there are some beautiful buttons there too.

Your WIP sound very complicated, but I know they'll be fab. Your covered baubles look like fruit at the moment (a lemon,a pear and a clementine). The little duck looks like the knitted character off Harry Hill's show - do you watch that?

Hope you received my gushing email of thanks for Button Annie - I've put a pic on my blog - thought it was safe to do so as you said all your ornaments were different. Thanks again!

Oh no hope you are feeling better now! and how annoying about the first swap partner - but how lovely about the other two! Your experiment looks and sounds intruiging! Thanks for sharing and visiting me!

Really love the look of those finger puppets. Hope we get to see them all when finished :-)
A x

Hurrah for kind swap runner coming to the rescue and how damn rude (you should name and shame in case they try the same again.......). Looks like you have plenty to be playing with :)

BTW the wrong link to your WOYWW went up on Julia's. Sounds like a lot of work you have to do there
Bridget #36

love your buttons! People in crafting/art are the most amazing people I have ever met. Love the projects you have going on! Looking forward to seeing them finished. Have a great week and thanks for sharing. Vickie #64

Yay buttons! What a coincidence is that as my WOYWW post shows my altered button tin. Shame that you were let down in the swap, it happened to me once and it's a real let-down, still the 'good people came through for you.
Ann B
#35

It only takes one bad egg to ruin a fun swap, shame whoever it was was your partner! Good on Laurie for filling the void with such a beautiful tin of button loveliness.

Five Needles!!! I can manage two and that is it. Great stuff on your blog today. Hope you are soon returned to full health - you can't be poorly for Christmas.
Hugs, Neet #12 x

Eeeek, I'm also uberly impressed that you can knit with more than two needles. Sorry to laugh but the description of a honking swan was perfick! Ah, the tall grey thingy with a handle on my desk is my daylight lamp which closes down if you get the drift. I love it when we're having such dark and dank days down here in Hampshire! Happy WOYWW! Di xx

Wowee - it's all happening here. Well after the not so nice bit, the buttons are a glorious reward and look amazing - enjoy them...hope you feel even better soon and can soon catch up with your projects...Thanks for taking some time to share your desk...Sarah at 14.

Love your buttons I loved playing with my mum tin when I was little...they all had names...I was a very sad child!! Hope you're feeling better. Have a great week! HaPPy WoYWw!
((Lyn))

Oh, look at the buttons - what a great gift, they're yummy!! Buttons are my favourite thing, I love 'em... And how patient are you knitting things that tiny? Hope your elephant looks less 'suggestive' than Julia's crocheted effort earlier this year!
Hugs, LLJ #39 xx

Love your button collection. I have inherited 3 tins and their contents over the years, some are very old which makes me think there must be one or two collectable ones amongst them. Wish I knew more about them.
So nice for you that you had an 'Angel' to step into the breach like that with such a beautiful tin too.

You have some great things on your work place!

Love your description of you talking like a honking swan, I took my grandson to feed the ducks and got honked at by the swans and hissed at by the geese. Button tins are great things, I like it when there is a surprise or two.

Oh poor you Mrs. A but I had to laugh at the honking swan!!! ROFL!! I'm still at the mute swan stage, I'm afraid - been voiceless for a week (yes, I know, nice and peaceful for everyone else!!) Throat still massively sore and I'm feeling pretty rough but at least I'm over the shivers, fever and nightmares. Despite being ill, your work space looks full of proeductive goodies! Well done you! Happy WOYWW and thanks for your lovely comment on my blog, Shoshi #70

ha ha Mrs A. what a blessing to have the lovely buttons, so kind.
And so love your idea of making it up as you go along - that is what happens when you start with a germ of an idea and take it from there - but sounds like a germs of another sort is really hanging on much longer than is decent or kind - pray it leaves you asap. It seems to me you have been poorly with it for a very, very long time! thanks for popping over - going to check your boys out on post below, love Shaz in oz,x

I think your method for the baubles sounds just perfect! 5 needle knitting - geez, I thought one needle crochet was complicated! Am so glad that the kind Laurie and jeanelle rescued your swap experience for you.