Time again for the girls in the Christmas Card Club to show our next makes. Kate has chosen Forest Scene with lots of snow and glitter.
I am running all behind as I had intended to do stitching round each of the cards but at the moment I can't even get the sewing machine to work let alone stitch. The instructions are very ambiguous even though in plain English. So after a frustrating morning I gave up and finished the cards as you see them here. Of course most of the light had gone by then so spent more frustrating hours trying to get decent photos. Managed it with the first two but the third for some reason just would not show up the sparkle glitter on the card.

Using a Nellie Snellen stamp called 'Winter Landscape with Deer.' I have stamped onto watercolour card and painted using my Caran D'Ache Gouache Studio watercolour paints.  The sentiment is by Julie Hickey from her Essential Christmas Sentiments set. Once it was dry I painted on the silver glitter glue using a fine paint brush. Basecard is made from forest green cardstock cut to size.   At first glance it might look like I have ribbon running through the middle of the card but it is simply where I have used two oddments of silver glitter card which were not quite big enough so I put the gap in the middle and it works well. Gem from my stash. 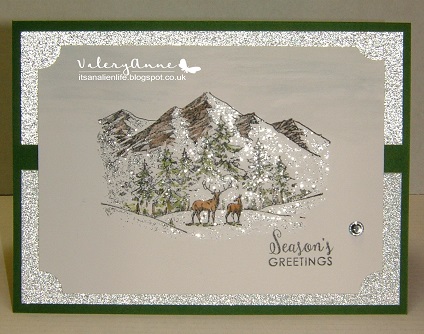 Another  Nellie Snellen stamp  a slightly larger one and called simply  'Winter 1'. Painted and then glittered  the same as above . Mounted onto silver glitter card and dark blue cardstock cut to size for the base card. The sentiment is by Julie Hickey from her Poinsettia Border set.  Gems from my stash. 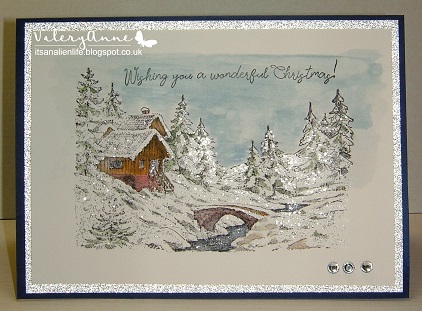 
Third Card
It was actually the first scene I stamped and painted but I just couldn't get a decent photo of the  sparkle on the snow so after a glass of wine I took a second piccy of the card lying down (the card not me!) so that is why I am showing it last.
Again a Nellie Snellen scene called 'Winter Waterfall' painted and glittered the same. The sentiment is by Studio Light from their Winter Memories set.
Gems from my stash. This photo shows the glitter up but not the painting making it look just black/white with the blue water. 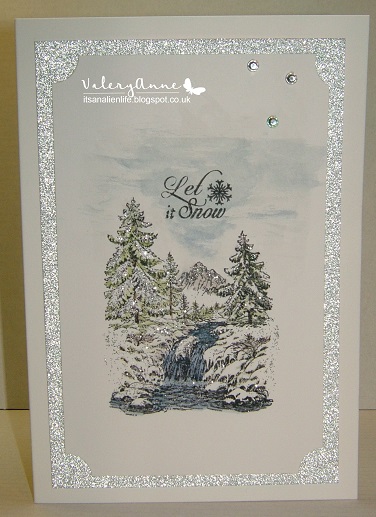 In real life the trees are green and the mountains brown as below. 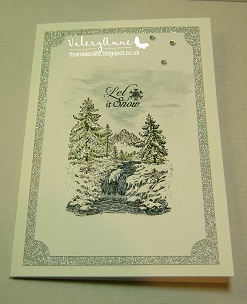 Off to see what the rest of the girls have made and then have another bash "*^% at the sewing machine. Any loud thumps and bangs will be me throwing it out of the window.

WOW absolutely stunning cards Valery, the scenes are amazing,,I love them,and your colouring is beautiful. I can see all the sparkle and it's just so lovely.
Poor you coming down with a cold, hope it clears up soon.
I'm chuckling about the glass of wine helping you out, keep cosy, Kate x x

Amazing wintery scenes, wow!! Your watercolouring is fabulous, as well all the glittered details! Love the stamps you used, such fabulous landscaps!
I have too a portable stitching machine, very unused (it's a Chinese machine that stays in a hand and to stitch it needs to press down and release continuing).
Hugs

A superb set of cards for Kate's theme this time Valery. I can certainly see all the gorgeous glitter on them, you did a fab job with the photo's.
Lorraine

Beautiful cards and love the Wintry scenes and all the sparkle-you would think sewing machines to be pretty simple to work -but no I have had one!!!
Carol x

Three fabulous creations, some gorgeous images and scenes. Love all the glitter and the designs too.
Glad that you had a lovlee day with our mutual friend.

Goodness Valery You have been so busy ...all these beautiful cards and lots of glitter...fabulous.
I am late commenting as well,it’s been one of those days trying to do too many jobs at once and not finishing any of them....hugs xxxx

Hi Mrs A what beautiful cards you have made,I love them ,you are very clever my friend xx

oh wow! Love these glittery cards. I do like a glittery snow scene and these are just perfect.
Thanks for sharing with us at Penny Black & More.
Lynn x
DT

These are all amazing, beautiful scenes and the glitter is beautiful!

Your post is a real feast for the eyes Valery-Anne, each of the images you have used have created a totally delightful card, beautifully coloured in the soft shades and lifted by the silver matting and layering and touches of silver and snow on your finished pieces.

Lovely to see you at Penny Black and More challenge this month, thanks so much for sharing your beautiful cards.

Such stunning cards ValeryAnn! I love them all. Chrisitne xx

These are all so beautiful! I love the sparkle! You have some gorgeous stamps!

Just popped back to thank you for sharing these beautiful cards at CaSS this month, they are perfect for our 'trees' challenge and it's lovely to have you play along.
xx

Your wintry card collection is just lovely and I love the scenes with all the sparkle! Sorry the stitching machine didn't work, but hopefully you'll be able to figure it out one day soon.

You did make me laugh a couple of times, especially when you felt you had to explain the card was laying down for the photo and not you! :) :)
All three fabulous cards, so very effective, love the colouring, the glitter - all work very well indeed. Thank you so much for sharing and joining us at Cardz 4 Galz :) Lynda DT

These cards are fantastic you did a great job building up these scene with glitter and snow...well done and tfs

wow these cards are amazing, love them all xx

Gorgeous cards! Thank you for joinng us over at Try It On Tuesday!

Oh my word Valery these scenes are just amazing and I love the added sparkle. Go you!!

Such pretty card with these wonderful scenes!
Thank you so much for joining us at Penny Black and More challenge!
Ellibelle's Corner

Such pretty wintry scenes - I love the detail and coloring, and of course, all the sparkle! Thanks so much for playing at TSOT!

You HAVE been busy, Mrs A. Beautiful scenes and the added sparkle is perfect. xx

Oh what absolutely gorgeous cards! Love them all!! As to the sewing machine. I bought a little one from John Lewis purely to use on cards, to preserve my good one and keep forgetting that's it's here, tucked on a low shelf. Have you tried Googling 'how to use or thread' and the model? Often things will pop up. Let me know by email if you wish and I just might be a bit familiar with it as i've had quite a few machines in my time. Bit of a bad week as you can imagine - Dudley had his grooming and his nails clipped today whilst I ran around like a mad woman between Sainsbury's and the Post Office. Almost ran out of petrol at one point - so distracted. Sigh.

Oh My! All of your cards are beautiful! Thank you so much for joining us at Try It On Tuesday! Chrisx

Your cards are stunning! All should be framed...love them! Thank you for joining the fun at The Paper Shelter! Good luck and please join us again!

Wow, three stunning cards Mrs A. Those stamps are beautiful and I love the designs with all that sparkle xx

Beautiful winter cards, mrs A. What a great work!
Thank you for joining us at Scrapping4fun
Renate DT

Beautiful cards, love the glittery scenes.
Thank you for going in at Scrapping4funChallenges. DT Val x

These are a set of fantastic Christmas cards, thank you for taking the time to join in with The Paper Shelter this week, hugs Pops x

Oh wow, Mrs A, what gorgeous, scenic cards! I'd love to have a winter holiday in any of those places!

Fabulous cards Mrs A. Love the wintry scenic images and the sparkle looks so icy.
I had trouble with photos last week, such grey days but if I'd had a glass of wine I think they'd be very hazy!
Avril xx

Beautiful card, ValeryAnne. Lovely winter scenes using your choice of silver and white colors. Thank you for sharing your creative talents with us at Try Stampin' on Tuesday! -Donna

Beautifully colored scenes, backed with the glittery backgrounds. Thanks for joining us over at the Creative Challenge of Christmas at Sweet Stampin'.

Wow what a fabulous set of cards Valery. I like what you've done with all these stamps and the sparkle you have added is so pretty. Sorry I'm late commenting Zoe x

Wow, what stunning cards! I love the amazing winter scenes that you created with the glittery snow - beautiful 😁. Thanks so much for joining in the fun at Try it on Tuesday! Hugs, Jo x

This is beautiful - such a pretty scene for Christmas. Thanks for sharing with us at TSOT :)

Oh wow what a fabulous set of cards! Thanks for joining us at Cardz for Galz.

Great creation - thanks for sharing it with us at the Merry Little Christmas Challenge.