Finally rounded up all the photos to show of the SummerHouse. It has been quite a  long job in progress as several jobs had to be done in the right order before it could finally be ordered and installed. Started out last February and the first job was to sort out the old garden shed and decide what was needed to be kept. This shed had lasted us 33yrs so I think I got my £99 worth of money out of it. It really was on it's last legs as it had been repaired and repairs on top of repairs done to it over the years but I had designs for the plot it was standing on. Next job was to order and have installed a small temporary shed which you can see in the photo below. It is really quite compact and it has been nick named 'The Sentry Box.'  You can see the old green shed in the background. 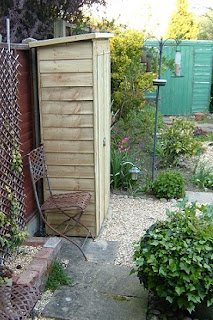 Next job was to have the garden shed demolished and taken away along with the items we no longer required. It is amazing how many garden shears, flower pots, forks, hand trowels,buckets,bird feeders, old broom handles and stakes you can accumulate( and keep just in case needed) over the yrs.  With the space cleared we could get on with the next stage which was to have  replaced the small section of fencing that hadn't been touched over the years other  than to paint from the other side and to attach it to the the concrete post with wire  to keep it from falling over in high winds! You can see the section in the photo below. 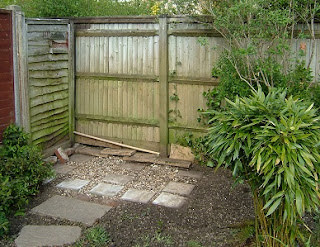 Once the new piece of fencing had been installed and stained we could see and start to mark out the space that would be needed for a concrete base to be laid. 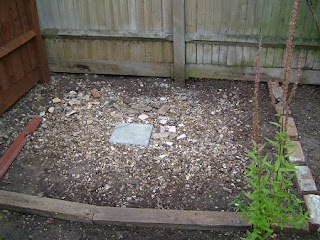 All these jobs had to be dovetailed round different suppliers and lead times and getting completed but finally in September the base was laid and ready. Now I could go and order the bespoke  Summer House which a local shed company was going to make and erect on site. 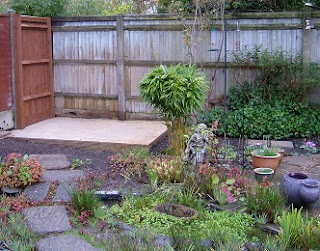 I had found just the right furniture and matting for it which, because it was now end of season were on sale at a good price in our local garden centre and they delivered it for us too!! Stored safely in the garage until needed.
Because the summer house was being made to order it took slightly longer than anticipated to arrive  but finally the day was here. Just one man had it erected in 2hrs 40mins and that included having to saw part of the side gate off to get the panels through into the back garden. 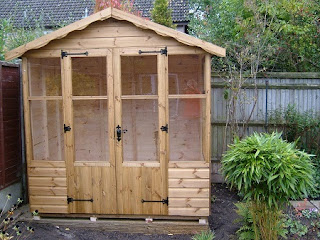 I was really pleased it arrived when it did, just 3 days before what would have been my Dad's Birthday as we were able to get the furniture in situ in time for a toast to my Dad as it was his legacy to me. 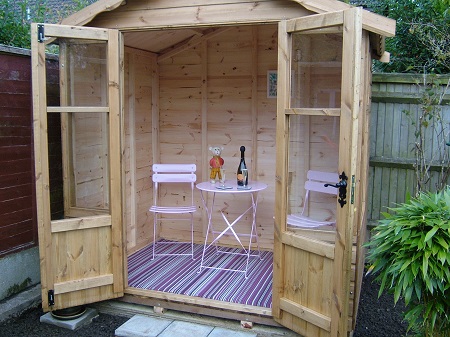 Below is the flower box that I made to hang on the wall (back in February at a 'Julie Hickey' workshop) in memory of my Dad. 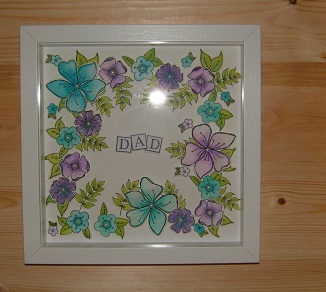 My Dad loved his garden and would spend all his days out there pottering around ( pretty much like I do now in mine). A photo of it in his hey day.  Roses in amongst the Honeysuckle. It was an absolute haven for Butterflies and Bees. 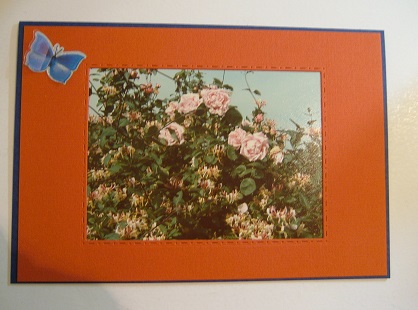 It has been a bit of a roller coaster to write this post as you can imagine but it is done now.

Oh how wonderful Mrs A, I love your summer house! Such a special way to remember your dad and to have your flower box picture hung up inside is perfect. My dad used to love working on my flower beds and made so many things for the yard like fencing out of small tree limbs. I for sure miss him too.
Big Hugs, Sherry xx
Loose Stitches and Unraveled Threads

What a wonderful space Mrs A. Nice to see the progressive photos of the changes in your garden space. I'm sure you'll have lots of amazing times in there watching out over your garden knowing that your Dad is watching over you.

A really lovely post V.A.. The Summer House looks great but the furniture must have lost its French touch in transit, these fit perfectly though, great colours of the flooring and a really lovely flower box. Like the look of the bottle too, hope it is not to smash against one of the walls to launch the SH, may as well send it up to me.

How many work to change the look of your garden and to have your summer house! It looks so pretty with that floor carpet and such sweet thoughts for celebrate the memory of your Dad's Birthday!
Big hugs

What a wonderful summerhouse in an idyllic location. I am sure your Dad would have loved it, and the gorgeous flower box too. Sending you huge hugs, lovely lady. It is so very hard, but it does get easier. It is 18 years since I lost my Mum, but every year I plant a few bulbs in her memory, generally tete a tete daffs and miniture iris. I often feel she is gardening with me in the spring.

What a lovely summer house Mrs A and a wonderful tribute to your Dad. My Dad gardened in old bathtubs and we have brought them home to continue using them for that, perfect raised beds! Enjoy your time there, Cathy x

Your Dad and my own sound very similar and in the early days it is very difficult moving forward, but through our gardens is a way they would understand and appreciate.

Your summerhouse is a very fitting tribute to him and in a lovely peaceful location in your pretty garden. My Dad's legacy was a shrub garden and courtyard area between our own and daughters houses and it's now beginning to flourish. We spend many hours sitting there and sometimes I'm sure he's with us as he loved sitting in the garden listening to the birds.

Me again, I've just enlarged the Rose and Honeysuckle picture and wondering if the Rose is Albertine? It looks so like the one my Dad had over his rose arbour and grafted cuttings which now grow over mine. If it is then I know you have wonderful aromas and an abundance of blooms in early June.

Your summerhouse is lovely Mrs A and I'm sure you will spend many happy hours in there with fond memories of your Dad. The flower box and photo of your Dad's garden are lovely and the summer house is just the right place for them.
Hugs, Avril xx

A wonderful summerhouse Valery Anne, I'm sure that next summer you and Doc will have many happy hours sitting in there enjoying the sun.

What a wonderful legacy to your dad. I love the design and all the windows. A terrific place to sit and reminisce and look out over your own garden. I can see you with your glass of wine enjoying this lovely place. The flower box is a beautiful remembrance.

A beautiful post and lovely tribute to your Dad, Mrs A. We are so privileged to see not only your wonderful new summer house, but also to experience how your Dad's influence continues to live on through your love of nature and through this restful and reflective place in your garden. I enjoyed seeing the progress through your photographs and love the finished product. How wonderful that you have included your tribute art to your Dad, too! Thank you for sharing your summer house with us. May you enjoy many, many wonderful times in it.
<3 J

Your summer house is AMAZING, Mrs. A! I've been so curious as to what it was, and it is lovely! Such a great place to spend your time during the beautiful weather! I enjoyed reading about the connection to your Dad too. Thanks so much for sharing the photos, it's very impressive!

Hi Mrs A wow what a beautiful spot to sit and ponder ,a beautiful reminder of your dad.
Oh i love your flower box,hope you have a lovely day my friend xx

That's lovely Valery and you are going to have many happy days in your new Summer House. The flower box is gorgeous too and I can just see it there on the wall. I know what you mean about the things we collect in our sheds. I don't know where it all came from but there was more pieces of wood inside our old shed than there was on it. Hubby had made a shelf in the roof area and just kept putting pieces of left over wood in there and I couldn't believe how much there was when we emptied it. Wishing you a lovely creative week, Angela xXx

Lovely post and love your summer house, it is great that it is your dads legacy to you. Your flower box picture is beautiful and lovely garden.

Well it really was worth the waiting and all the hard work. It looks fabulous and I'm sure you're going to spend many happy hours enjoying it. I love the framed picture you made xx

What an adorable little house! So special to have the flowers you created to honor dad on the wall. So special!

I just love your summer house Valery! Looks so inviting and to have that lovely piece of art work honouring your Dad is just so special!

Hi, ValeryAnne! Such a delightful post. I feel as though I've visited your home and enjoyed lovely moments including "meeting" your dad. The roses and jasmine are incredible! I can picture all the pollinators loving that part of the garden. The summer house looks so peaceful and a wonderful place to relax and tax in the beauties of your garden. Thank you for sharing this little part of your life! hugs, de

I so enjoyed reading the post and I am so glad it has finally finished and what memories of your Dad x. Enjoy the Summer house and make new memories x.

WHat a wonderful transformation took place in your yard, and I love the tribute paid to your father! It has such a deep meaning and I felt the love all the way across the ocean :) A job well done, now sit and enjoy that special space:)

What a wonderful project--your dad would love what you've done.

And it was a beautiful, heartfelt post, Anne. It was well worth the effort to get it done and I can imagine you getting many hours of enjoyment out of it in the years to come, with many toasts being made to your Dad! Your framed art to honor him is lovely! Thank you for sharing all the photos of the process!! Hugs, Darnell

I'm sure you'll spend many happy times sitting out there. Or will you just see jobs to do in the garden and never sit down for more than 5 minutes? LOL I'd like one of these but I could probably not sit still. x