Apologies for this post going up late. The Doc had a phone call early  this morning to say that an  Aunt had died so I needed to sort a card out to be sent.
It is the start of the New Year and it is time for the girls in the Christmas Card Club to get started on our swag for 2019.  Christine  has set the first theme which is snowflakes.
I had a search through my Christmas papers and found several snowflake designs plus some toppers and these cards are the result.
First two cards have design papers by LOTV from their 'Krafty Christmas' paper pad. The toppers were freebies in a magazine  late last year. The wooden snowflakes were in my stash. I finished round the edges with a silver glitter glue pen and on the snowflake. 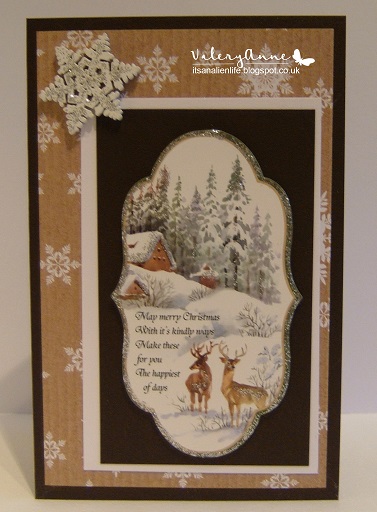 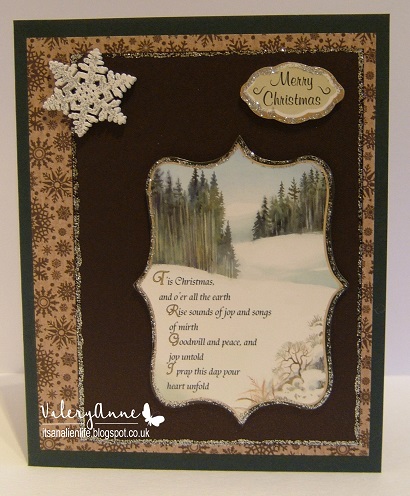 Third card again uses a topper from the same set as previous two cards. The papers were freebies from the same magazine. The snowflakes have been in my stash for years. I purchased from Poundland I think in a large packet of assorted colours. These ones are pink (hence not been used) but they went perfectly with the colours in the design papers which just goes to show that if kept long enough you will find a use for it! Gems from my stash. 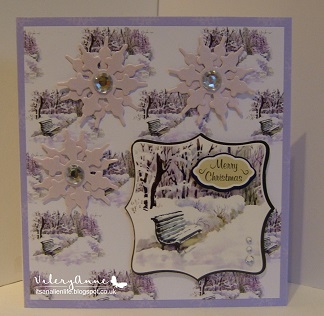 
Fourth  card uses a freebie topper sheet from Making cards  December 2015 'Traditional Christmas' which I have teamed with some cardboard snowflake shapes from my stash. I coloured using a Nuvo Glitter Marker 'Imperial Blue' and when dry added a silver glitter glue over the top for good measure. They really do sparkle. 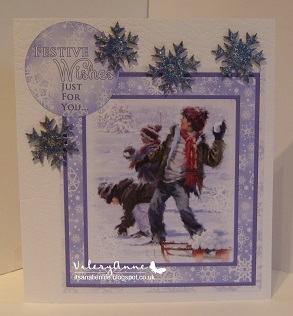 Entering card above into the following challenges:
Winter Wonderland #It's Snowtime.
Daisy Chain Challenges #26 Add some sparkle.
Lil Patch Of Crafty Friends #97 Anything goes.
Christmas Crafts All Year Round # Let It snow.

Fifth card uses a topper from the same set as the card above but this time I have made into an Easel Card. Additional snow flakes are white peel off stickers (from my stash of many years) which just have the number 121001/5204 on the back of the sheet. I believe they are Scandinavian origin.  Design paper is a magazine freebie from last year.  I adhered the circles to blank card and fussy cut finishing with my handy T.H. distress edger tool. Silver glitter glue enhanced  not only the circles but also the sticker snowflakes. 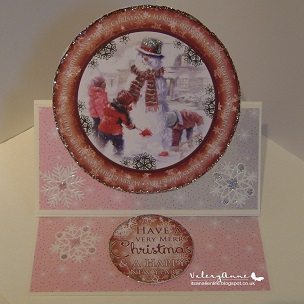 Entering this card into the following challenges;
12 Months of Christmas #49 Anything goes =optional anything but rectangle.
Simply Create Too #145 Anything goes /no twist.
Love To Craft #30 Anything goes.
Card Mania #112 Baby It's cold outside.
Crafting By Designs # Anything goes.

P.S.
I had intended to make six cards but I have managed to do something to my left shoulder so sitting at my desk for long periods is not very pleasant at the moment. Five had me knackered and I was going to take photos in the morning to include in this post but this mornings events decided  otherwise .

I always admire your great cards, Valery. And these ones are gorgeous. Lovely design and papers. I hope your shoulder will be better soon. Hugs, my friend.

You have been super busy Valery - these are lovely! Big hugs rachel x

Beautiful cards Val. You're on a roll girl. Love them all. Hugs Rita xxxx

Sorry for your hubby's Aunt...
Beautiful compilation of Christmas cards, love them all. The more delicate are my favourites, especially the last two!
Hugs!

Hi Mrs A your cards are stunning. I haven't quite started making Christmas cards yet but I will soon. I was so sorry to hear about your sad news. I hope your shoulder gets better soon. Take care. Hugs Jackie

Oh my goodness!! I cannot believe you managed five cards with everything else you had going on. My condolences. They are all terrific! Hugs Christine x

A fantastic start to your Christmas 2019 stash Valery Anne I love them all.

Wow Valery Anne such beautiful cards ,so sorry to hear your sad news.xx

Just a quick hello, first trip out for many weeks. B x

So sorry to read of your family bereavement. Fabulous cards shared in post.

Thanks so much for your visit to my own blog and ... sorry about those glorious AALL & Create Stamps! You will, however, love them!

Sad news at the start of 2019...So sorry for you.
You did a great job making these beautiful cards.
Lia xx

Hi Mrs A. You have been busy - fabulous cards and a great start to 2019's Christmas box.
Hope the shoulder doesn't cause you too much bother and heals quickly.
Avril xx

Your cards are beautiful, like the glittered edges, glittery embellishments, and snowflake embellishments to go with your lovely designs! Sorry for your loss.

Wow! What a a wonderful collection of snowflake cards. You really knocked this challenge out of the park. Your cards are beautiful! Hope that shoulder improves quickly. Love seeing your inspiration! Have an awesome week!

WOW Such a beautiful variety of cards....I love how you use such pretty and beautiful images so effectively on your creations
Cheers
Dr Sonia

all gourgeus cards, Valery
are perfect
congrats !! :)
have a great day

What a beautiful start on your 2019 Christmas cards! These are gorgeous!

Hello Valery, what a wonderful selection of cards, they are beautiful and filled with lots of lovely snowflakes.
Sorry about the Doc getting the sad news, not a great start to the year, Kate x

A fabulous display of cards, each different and inspiring.xx

I'm in awe of your beautiful and early Christmas cards! Each one is simply divine! I wish I could kick-start my Christmas stash, but just not feeling it yet :)

Lovely selection, I couldn't think about making any more Christmas cards at the moment!
Sorry to hear that you had bad news to start the year :(
Anne x

These are amazing! The images are stunning
Valerija xx

Hi Mrs A,
oh my word what a gorgeous selction of cards and their designs look really awesome and very beautifully created.
Love all 5 designs and those topper scenes are so pretty.
Hope your shoulder gets better soon.
I have recently had to have a steriod injection in mine and it's so much more comfortable now, but long periods at the keyboard are still a problem.
Lots of crafty love. Jenny L.

So sorry to hear about the Doc's aunt's passing. A sad start to the new year. But on a happy note, you've made some absolutely beautiful cards! These are all gorgeous, really loving those shaped toppers and sweet snowflakes! Hope your shoulder feels better soon! And thank you for letting me know about mailing the Santa sack - I'm super excited and can't wait to see the goodies you included! I so appreciate your generosity! Hoping to join your butterfly challenge but I'm stuck in winter/holiday mode still. Maybe I can shake it long enough to make a butterfly card... we'll see!

l am sorry to read about the lost of your Aunt. All of your designs are just wonderful.

These are lovely, ValeryAnne! Each creation is so unique and so many different themes and designs! Your have been busy! I'm sorry to hear about your Aunt, sending you my heartfelt sympathy. hugs, de

You've been busy Mrs A! Lovely card and beautiful snowflakes - great use of all the toppers too. Visiting today with my DT hat on, so thank you for sharing at Winter Wonderland.
Kath x

Beautiful cards..all of them.
Thank you so much for sharing and joining in with us at CCAYR...[ Christmas Crafts All Year Round]

Wonderful cards with great patterned papers. Thanks for joining us at CHNC Patterned Paper Challenge this month.

Fabulous cards Mrs A! And interactive cards for the twins will certainly keep you on your toes. Have you tried slider cards? They're always a hit. And, b never ending cards are brilliant but peraps two is a little too young for them to 'get'. Not sure.

Now have a host of suggestions re. the flea treatment but am darned sure I ain't feeding him insecticide orally! Frontline and similar as you described are the way we'll go.

Hope the Aunt isn't Auntie Eileen? And also REST that shoulder!! Mine took a few weeks to get better, but it did get better which was a relief.

Now taking Dudley for walkies when Len is out or busy and we have some nice areas just further down our road and through a cut (there are two in fact). AND they also have doggy waste bins for poop bags as well. Just need to train Dudley to hop up and perch over the bin opening and we're sorted!

These are all beautiful!! Great job making so many at once! Hope your shoulder is feeling better soon!
Thanks for playing along with us at Sparkles Christmas Challenge!
Debbie
Debbie's Dash of This and That

Wonderful selection of Christmas cards here. Thanks for sharing with us today at LPCF .

Super cute!!! Thank you for joining us at Love to Craft, good luck!!! Amy DT

So sorry to hear about the Doc's loss. All of your cards are so very beautiful. Thank you so much for entering our challenge at Crafter's Castle this month....good luck :)
Hugs... Janie
DT
Crafter's Castle
crafterscastle.blogspot.com

Beautiful cards! So sorry for the loss in your family. Thanks so much for participating in our CHRISTMAS CRAFTS ALL YEAR ‘ROUND challenge. Hope you participate in our next challenge!! Have a happy crafty day!!!
Deanne at A Little Bit O’ Paper

...and thanks so much for participating in our WINTER WONDERLAND challenge. Hope you participate in our next challenge!! Have a happy crafty day!!!
Deanne at A Little Bit O’ Paper

Hi Mrs A, sorry but owing to being unwell recently I'm a bit late getting here. Love all your snowflake themed cards. The snowflake themed patterned papers are a great choice and the images are all lovely. xx

Stunning cards and embellishments
Thank you for your entry at Scrapping4funChallenges
Rachelle DT
https://scrapping4funchallenges.blogspot.com

Beautiful card, love the paper
Thank you for your entry at Scrapping4funChallenges.
Majda DT

Thanks for joining us at 2 Crafty Critter Crazies.

Your cards are really beautiful.♥
Thanks a lot for joining us at our Add some Sparkle Challenge by Sparkles Christmas Challenge
Good luck and hope to see you again.
Hugs and greetings Angela DT

All cards are beautiful. Thanks for joining us at Card Mania Challenges. Good luck and hope you'll join us again.

Gorgeous cards, thanks so much for sharing them with us over at Crafty Addicts Challenge this month!
Hugs Donna (DT) xx