A gnome isn't just for christmas. As you can see they can be put to other good  uses too. I have had this 'Kadoodle' stamp for ages and never used but it occured to me that he is perfect for the current butterfly challenge which runs until next Tuesday 2nd Jan. so still time to come along and play.


#91 The Fairies, Elves, Pixies, Gnomes come out to play. 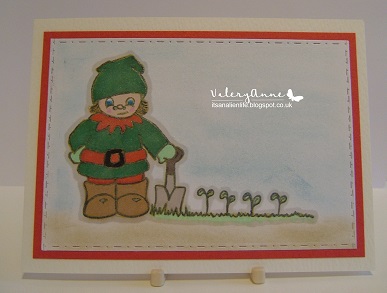 The stamp is called Let It Grow and is by Sandra Dry. You can still purchase Kadoodle stamps from The Craft Barn but sadly not this particular one.  I have not added a sentiment, though several spring to mind as I don't have a home for him to go to at present so I will add one at a later date.  Coloured using my promarkers,gold gel pen and pearlescent chalks.


I said I would post details on how I made my table decoration for this year so here are some photos I took as I was making it.

The kit is by  Papermania -Create christmas - craft your own light up letters - Noel. They come with lights already inserted and also with the batteries.  I forgot to take a photo of the letters in their box before I started but they were just plain brown MDF.  I have had these servivettes for ages in the odd box and just had four of them left. they were 3 ply which I  separated. 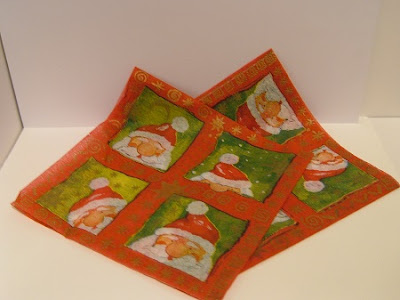 The back layer was just palin white so I have kept for a further project. The middle layer however had the imprint of the front design so I tore this into small pieces and used it to paper piece the letters with copious amounts of PVA glue 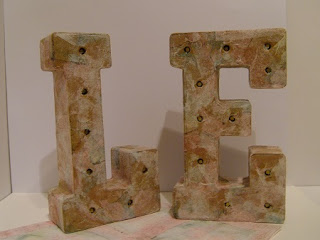 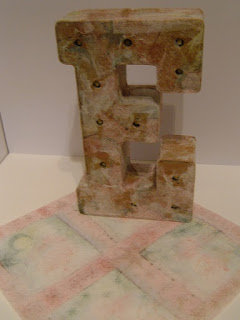 At this point I was in half a mind to just paint over using either red or green poster paint but in the end I decided to keep  going. The design on the napkin meant I had quite large pieces of the napkin with Santa's head on so I fussy these into squares and then covered each  letter  again using loads of PVA glue. 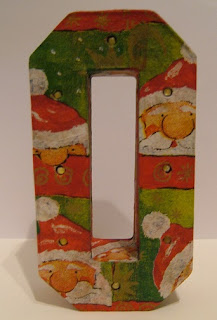 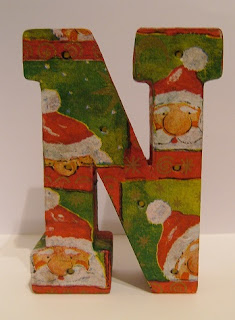 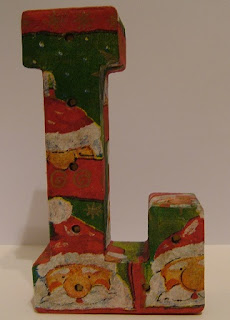 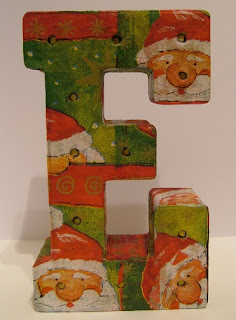 I have to say it is more luck than design that when I put all the letters together in a row the Santas all lined up!!

I'm popping over to Pixies Play ground with them and seeing what else everyone is up to.  I hear there is some  Eggnog behind the bike sheds. Better hurry before it's all gone.

Really sweet gnome card! Love your decorated letters, the serviettes were just perfect to use.
Wishing you a Happy, Healthy and Creative 2018. xx

Hi Mrs A the gnome card is gorgeous and I love how you have decorated the letters they are very festive. Happy New Year. Hugs Jackie

Oh, wow!!! Love the gnome card, but your decorated letters really stunning me!! They are just AMAZING!!! Such clever idea! Love so much the Santa's faces peeking out from the letters!! Fabulous work!

Clever use of the Christmas stamp Mrs A. Love your take decoration such a great idea. Wishing you and your family a fantastic 2018

A super sweet gnome stamp Mrs A and lovely CAS design too. I love your Christmas Noel decoration, those Santa faces are so jolly, I'm sure it was most admired by your dinner guests on Christmas day.
Happy New Year!
Lorraine

Cute card Mrs A and as for your beautiful letters Wow! what a wonderful festive decoration :)
Hugs Kaz xx

Just popping in to wish you a Happy, Healthy and Crafty New Year and thank you for your friendship and encouragement. Thanks also for keeping the Butterfly challenge going, I know it takes time and commitment.

That's certainly a cute little stamp - great card. You did a grand job with pasting the napkins onto those letters, making such a brilliant decoration. Enjoy the egg nog with Parsnip and I wish you all the very best for the coming year.

Fab card and decoration there Valery.....wishing you and yours a very happy and creative 2018 xx

Fabulous card and the LOVE is amazing! Happy New Year!

Gnomes are definitely for everyday of the year...just ask Travelocity and their Gnome mascot. I love your NOEL letters with the Santa decoupage. Very clever dear. Happy New Year 2018...<3

I had a friend who liked Gnomes she was crazy about them...great card for Spring.
I love the NOEL and the Santa Napkins...well done and tfs

Thank you for all your wonderful comments on my blog. I really appreciate you. I love this project! So cute! I wish you a crafty 2018 as well.

What fun! Wishing you a happy, healthy and creative New Year!

Sweet gnome card Mrs A and I love your table decoration. You are so creative! Have a fabulous new year, Cathy x

Wow--that Noel is just amazing, Mrs. A! Hope you had a wonderful Christmas & wishing you a joyous New Year!

Absolutely wonderful Noel Mrs A! What a great idea and those Santas do look just perfect! Well done you! And good work using up those paper napkins as well.

Hi Mrs A, that really is a sweet gnome card.
Love your Christmas decoration, the Santa's look fabulous.
Hope you had a wonderful Christmas and best Wishes for 2018.
Hugs, Avril xx

This is fabulous, Valery. Happy New Year, my friend.

It's a new year and I finally can come over to visit you here! Sorry that it has been awhile. I finally got my fairy cards linked up, too!! Your gnome card is sweet. I like him in the garden.....gives me hope of warmer days ahead full of growing things.
Your table decor is stunning. What a happy accident that everything lined up so perfectly. It's such a creative and wonderful way to use those jolly napkins.
Happy New Year to you, Mrs A!!!
<3 J

Hello Mrs A... super duper Noel, that Santa is just a peachy fella and looks fab. Wishing you and yours a happy, healthy and peaceful 2018 (maybe even elfless) ;)... take care x

Loved the tiny gardening gnome! He's adorable on this card. Loved reading the how-to on your labor of patience with this collaging of the napkin. I've not had great success with my napkin efforts (and I have a ton of those bought with the intention of turning into something pretty!) This is such a unique and clever way to dress your holiday table. Hats off to you! Sending many wishes for a wonderful 2018, that it may bring all that makes you & Doc happy. Looking forward to being more active in 2018 than this past year. Big hugs & TFS.