I recently spent a crafting day with Jean from B J Crafts and this is the second project that I made.
I had asked to recycle a book using Mixed Media  products and Jean provided me with a hard covered book to use  and I just had to bring an old picture/photograph for the front. 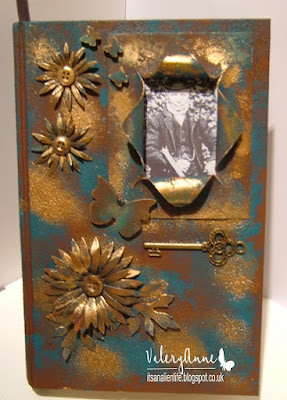 I was pleased when I saw the book I would be using as I had already read it in paper back form so wouldn't have to sit there reading it before I could get started !! Lol.  The first thing was to cover the entire front and back covers using Imagination Crafts Rusty Patina. I chose to use a dark brown and a sea green This dries remarkably fast so the next stage was to get really messy and using your fingers daub on Imagination Crafts Starlight Wax in a rustic gold colour and rub into the surface to give the sparkle. I could choose the embellishments and I went for butterflies (what a surprise ), an old key, buttons and a Heartfelt flower die  which were all given the same treatment.  The old photograph I took along was a photo copied image of my G.G. Grandfather. The original photo is a lot bigger and shows he is carrying a shot gun and has his faithful black dog at his feet. 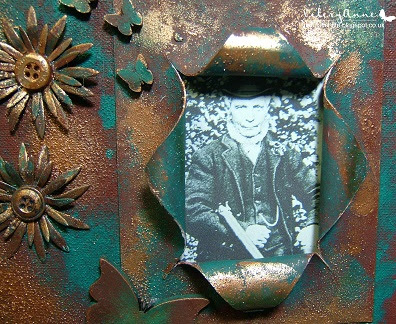 The Frame was created from stiff card and  I used a craft  knife to cut a cross in the centre  carefully peeled back to create the aperture. Coated same as the other embellishments and then the picture was tucked behind and the frame glued to the book front.   I had told Jean that I intended making the book centre into a hidden compartment by carefully cutting the centres from the pages and gluing together but when I got home and had left it on my desk for a week or two decided instead that as the picture was of one of my ancestors I would start the book off with his details and then add all the rest of the family on subsequent pages. (I love genealogy and this particular branch of the family tree I have manage to trace back to 1463) 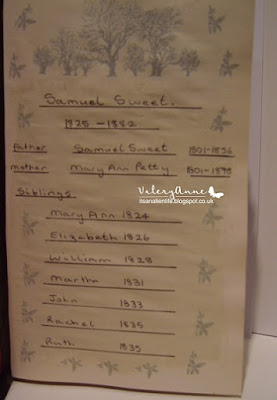 I have glued two pages together to make them more sturdy throughout the book and painted over the pages with a cream paint to cover the wording. I used a tree stamp to decorate the top of the front  page which has Samuel's details on it listing his parents and siblings and subsequent pages  will go through each of the family members in turn. I will be in there right at the back eventually along with my children and their children. Something to keep me occupied on a cold winters night!

wow this is absolutely amazing, love this so much. Great display.xx
[aNNie]

Oh my!!! This mixed media creation is just wonderful! You have made a fab work altering that book!!!! Amazing ancient feel, love how you made the aperture for the photo and the cover effect is really stunning!!! And also the genealogy tree!! Wow! Such fab inspiration and surely it's a great way to take memories of your ancestors!!

Good morning Mrs A this is a stunning project. What a wonderful idea to alter a book. The workshop must have been amazing. Take care. Hugs Jackie

Such a great idea to use the mixed media book for your ancestry. Love how you did the aperture for the wonderful photo and it looked like you had so much fun...and messy time making this fabulous project x

What a great project. It looks fantastic and is so personal. Sounds like it will keep you busy altering the interior x

What a wonderful idea using the book and adding the family hisory. This is a keepsake to pass down in the family. Great cover.

I'm into genealogy too and what a wonderful way to preserve some of your memories and information. So much more interesting than just storing the 'tree' on computer.

Fabulous mixed media book Mrs A and a really great way to record all the family details. After reading your post this morning I ended spending most of the day searching some more old documents from my own ancestors... so no crafting for me! xx

What a fabulous piece of work. I'm trying my hand at a bit of mixed media too and I love that this has such a personal touch x

Fantastic Valery, I love the look of the outside of the book and also the idea for adding the family tree to the inside.

What a brilliant idea, Mrs A. I love mixed media art, too. Kisses, my friend.

Hi Mrs A,
oh my word this is so brilliant and very wonderfully created.
Love the colours, and the gorgeous rustic look to it.
Never thought of doing that to reading book it's suc a great idea.
Lots of crafty love. Jenny L.

What a fabulous mixed media Valery, using a book was a great idea.

This is a lovely altered book and your adding to it will allow it to become a treasure. Creative Bliss...<3

Valerie Ann this is lovely. Your colour combination is perfect. Thank you for sharing with us at Rhedd's Creative Spirit Challenge.

I love mixed media art, too. Kisses, my friend.

This is stunning, I'm not so good at this.

This is really lovely! Thank you for entering your project at Rhedd’s Creative Spirit. Sammy-x

Oh my goodness Mrs A., now you have me wanting to try my hand at something like that! What a fabulous project, love how you used a family photo and added your family ancestry! Wonderful embellishments and colors, I would have chose a butterfly too and of course a key. :)
Hugs, Sherry x
Loose Stitches and Unraveled Threads

A great job! This is going to be such a wonderful book...

Fantastic what you did to the cover! looks like metal!Thanks for sharing this with us at Rhedd's Creative Spirit this month, Good Luck. Rupa.

Popping back in to say: Thank you for sharing with us at Altered Eclectics this month. Sammy-x