Time is flying by and another challenge is due from the girls in the Christmas Card Club. Lorraine set the theme for this one and asked for a White Christmas. A quick look through my used christmas card stack turned up these two card fronts.

The first one I trimmed down and adhered to silver glitter card to make a small border and then attached to a scalloped edge blank card base with 3D pads for a raised effect. The sentiment is a die cut by Xcut which I cut from a scrap of the glitter card that I had left over. The snow flake is part of the die cut. 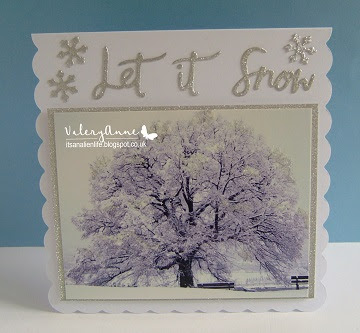 Second card uses a stamp  Sentiment Corner by Phill Martin. Base card is made from 300gsm white cardstock and the corner rounded using my large Xcut chomper. Card front was trimmed down slightly and again the corners were chomped. Silver star stickers were in my stash. 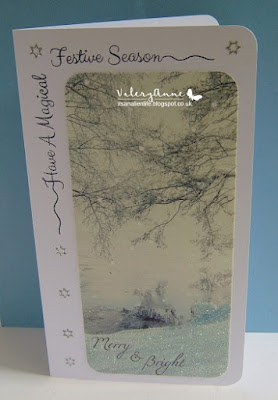 Entering this card into the following challenges.
Scraps of Life By Scrappy Mo # Rudolph  Day June.

Excellent way to recycle some cards. What a beautiful tree that first one is. I love to see old cards recycled so beautifully and that corner sentiment stamp is just right. Kate x

Absolutely gorgeous Valery, so elegant and definately shows a White Christmas, and of course there's trees which I love, Kate x

A super pair of frosty Christmas cards for my challenge this week Valerie. I love those images and your beautiful designs.
Lorraine

Two beautiful cards Valery, I love the gorgeous snow scenes on both of these.

Great upcycling, Mrs A. The images are beautiful and you've transformed them into really elegant cards. xx

Upcycling at its very best! I love the way how you made 2 new cards with old 'stuff'!
Lia xx

Great display and I too just finished a card using an old Christmas one. Can't show it yet as for a GDT....later.xxx [aNNie]

Both of these cards are so pretty. The scenes are so peaceful. I love that corner sentiment.

Two beautiful wintery scenes to cool us in this hot weather. The sentiment corner is very effective.

Two fabulous cards Mrs A and super upcycling. I love the corner sentiment on the second xx

Great recycling. They are two lovely cards Mrs.A and I really like the way you've placed the sentiments on the second card. Barbxx

Lovely cards , I love the tree on the first one

Wonderful upcycling, Mrs A.
Both are lovely but that second one really caught my eye as I especially love that sentiment!
Thanks for taking part in the June Rudolph Days Challenge.

Two beautifully recycled cards, I love both of them. Such lovely sparkly images deserve a new life.
Jean x

Gorgeous cards and what a great way to upcycle!