It was my good blogging friend  Margreet's Birthday a few monhs back  and this the card that I sent to her in the Netherlands.
I used up the last of the hand made paper that I had made at the craft  club I go to in the village. Backed onto bronze pearlescent card stock to make a tent fold card base.  The framework and embellishments are from a company called Yoosami  which had been in a £10 goody bag  from the last craft show I had been to. Then I went in search of an image to put inside the frame. Searching through my stash I found some images by Pink Gem that I had previously coloured up whilst on holiday 3 yrs ago and had then brought home and done nothing with. 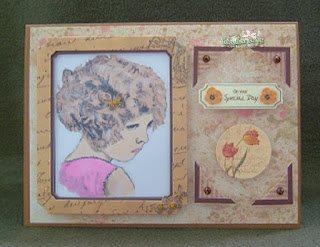 This particular image is called Sophie and is coloured using Distress Marker pens. (I know this as they are the only pens I took on holiday with me and as I only had 8 of them  was quite restricted for colour.) Close up shown below. I added one of the buterflies with a gem in her hair to represent a bow. 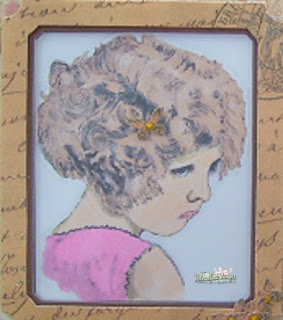 A lovely image - she looks as if she is sulking. I'm sure your friend loved it. Christine x

This is such a pretty snippets card, Mrs. A.! You did a lovely job with the coloring!! Enjoy the weekend!! Hugs, Darnell

Hi this is stunning. I love the image you have used. Thank-you for joining us at the Crafts Galore Encore Challenge 28 Anything Goes. Hugs Jackie DT

Wow Mrs. A you made paper! That's impressive. I love Sophie with the butterfly in her hair. A very pretty card. I'm sure your friend will love it. Barbxx

With only 8 markers isn't easy colouring... but you have made a beautiful wok with them! Sweet little girl and your own handmade paper is fabulous!! I tought that it was been bought! Fab design too, love the frames!

This is gorgeous Mrs A. I like the design and the sweet image.
Kevin xx

This is just beautiful, I'm sure your friend loved it. That little touch of a butterfly in her hair is genius! Cara x

What a wonderful card Mrs A and such a pretty image. I do agree though, she looks a bit as if she's sulking 'got a pet lip' as my Mum used to call it :)

Beautiful card Mrs A, love the vintage design and soft pastels...I'm sure Margaret was over the moon with this card! :) Donna ♥ x

Lovely card, thanks for joining us at Sisters of Craft and good luck. Wendy DT x

I'm so impressed that you made paper. Was it hard to cut down the tree? Just kidding, that is a talent for sure. Your card is wonderful. Sophie isn't having a good day but you did a brillant job of coloring her with such limited markers. I love the copper paper and the tulips.

Just gorgeous Valery, the image and papers are so pretty.

Stunning Card. Thank you for joining us over at Our Crafty Corner, Good Luck and we hope to see you again soon. Alison DT

Beautiful birthday card for your friend, Mrs. A! Love the butterfly bow!

Hi Mrs A,
what a very beautiful creation for your friends Birthday.
Your friend must have been so pleased with it.
Lots of crafty love . Jenny L.

This is absolutely charming, every detail is perfect!

A gorgeous card. Your backing paper looks amazing and the image is wonderfully coloured xx

What a sweet image, colored beautifully with only 8 markers too! Adorable card!

Oh my this is so beautiful the image and card design look wonderful, thank you for joining our challenge at LPOCF
hugs
lorraine x

Lovely colouring and great design. Thank you for joining us at Our Crafty Corner. Helen DT

My Scrap Pages and Cards said...

Your card is just beautiful
thanks for joining our challenge over at
http://creativeartistemixedmedia.blogspot.com.au/
Debbie DT