Time for the girls in the Christmas card club to show our next makes.
Christine chose the theme this time which was Snowy Trees.
A quick riffle through my box of used christmas card fronts turned up this snowy tree scene
which had the added bonus of already having a sentiment added. 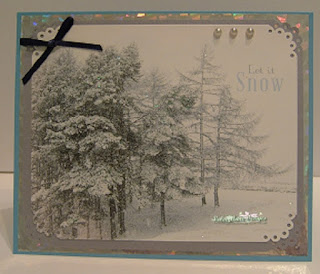 I trimmed down and used a fiskars corner punch for extra interest. Backed onto silver pearlescent cardstock and then onto a  sheet of silver holographic card stock.  Finally adhered to light blue cardstock to make the base card.  Premade navy bow and pearls from my stash completed the look.

I already had the following card in my never shown file as it was for a swap I did back in  January.
The theme was use stencils and winter 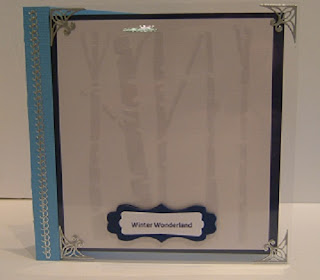 I made the base up using acetate for the front and sandwiched the embossed card in between.
The stencil is by Imagination Crafts which I coloured in with a grey promarker. The white  base card
had a fine grain effect on it so the grey showed up really well. backed onto navy pearlescent cardstock. Silver stickers were in my stash along with the blue sentiment tag. The sentiment was generated  in word and I used  Su's Modern labels punch to die cut out.  I used blue cardstock to make the rest of the base card with.

Two more cards for the pile  and still sticking to my resolution of making one card with a recycled christmas card and one using my stash of stamps. digis', die cuts and stencils.

Entering into the following challenges:
Crimbo Crackers #106 Anything goes.
Country View Challenges #39 Use a stencil.
Crafty Hazelnuts Extra # Anything goes.
Posted by Mrs A. at 01:20

Two great cards Mrs A and perfect for the theme. The wintry scene on your recycled card is gorgeous, and so is ythe one with the stencilled trees. really must do more stencilling. I enjoyed the one and only card I have done. Hugs Christine xx

As always, a marvelous recycle that fit the snowy trees theme perfectly. Can just feel the icy cold on this one. Loved the stenciling of #2...again, evocative of a brrr winter day. Love the shape of these trees! TFS & Hugs

Afraid I've not got round to ruby recycling so will do a spell on the naughty step and promise to do better next time.

Hope you have a good Sunday.

Two lovely cards Mrs A and the top one does look really frosty and Christmassy. I really like how you've used that super stencil. I hope you and the Doc are feeling better now. Barbxx

Now that is one pretty scene. I love it when it is snowing - everything always seems so quiet. Beautiful card!
sandy xx

A great recycling of an image, and I think that the holographic paper would look supersparkling in person! Lovely corner, I too have this corner punch and works pretty!
The seconda card is stunning, you are the queen of the acetate! ;D Love the embossed and stenciled truks, great work!

This is amazing Valery Anne so beautiful.
Hugs Veerle

I like the double punched corners on the first card, I would never think to do that. Both lovely, I like both kinds of snowy trees.

A lovely card Mrs. A and a great piece opf recycling too.
Avril xx

A lovely duo of snowy trees Mrs A, do love the pretty corner punch you used. Carol x

Great resolution, Mrs.A., and well done you for sticking to it! I'm all talk when it comes to my resolutions. I think I'll be sending Christmas emails this year, aack! I love these of yours! I hope you and the Doc are finally feeling all better! Can it be we are down to only 63 sweeps??? Hugs, Darnell

Am I right: did you recycle an old card? It looks gorgeous now!!
Lia xx

Fab card. Really snowy trees and they are stunning. Zx