Who fast forwarded the clocks again!!
It's time for the girls in the Christmas Card Club
to show their cards using the theme picked by Asha

The Holly And The Ivy.

A quick look through my used christmas cards
and I found this robin card with lots of Ivy.
Artists name is shown as Audrey North .
I decided to give it the tiled effect
so I first adhered the card front to cardboard
from a cereal box and then another layer
of the same for more strength.
I trimmed to 4" x 5 and marked out on the back
a grid of 1" squares  which I numbered 1 to 20
in order to know where they all went once cut! 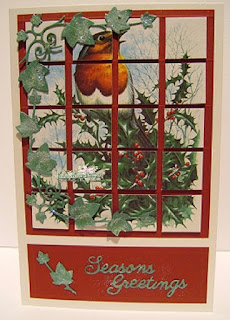 I then marked a piece of red cardstock
into a 1.25" grid with my Scor-pal  to give
the appearance of the grouting between the tiles
and adhered them all into place.
So that was the ivy element  now I needed the Ivy
Remembered I had a Joanna Sheen Ivy die
and cut it out twice using white shimmer card.
I didn't have any green card stock the right shade
so once cut out I coloured in with a promarker.
A little glue from a glue stick  and a sprinkling
of glamour dust  gave the frosted look.
I used a Britania word die for the sentiment
which was cut  and coloured the same way.
The little bit of ivy was left over from
where i arranged it round the tiling .
It's the last Rudolph Day challenge for this yr
so am dashing off to Mo''s blog to enter .
Entering into the following challenges:
Scraps of Life by Scrappymo # Rudolph day.
A Snowflakes Promise #10 Anything goes.
Crafty Hazelnuts #257 Use die cuts or punches.
Crafty Hazelnts Extra # Anything goes.
The Crazy Challenge #211 Everything goes.
Craft Your Passion #289 Anything goes
Fab 'N' Funky #283 Anything goes as long as its christmas.
Suzy Bee's Bloomin #108 Anything goes + use a die cut.
Hiding In My Craft Room #227 Any holiday.
Pixie's Crafty Workshop #205 Use your snippets (White card for die cuts).
Posted by Mrs A. at 03:06

So gorgeous! I really love this card, Mrs. A!

Gorgeous card. Wonderful tutorial. I'm putting this to the top of my must do pile.

Your cards are gorgeous. So much patience!

Wow, stunning work and great reusing of a card! It seems you have been very busy with all these pieces! Such a gorgous result! The ivy branches over the tiling gives a fabulous 3D look!

Hello Valery, beautiful card, I just love how you upcycle your cards, great imagination. Gorgeous trad robin as well as holly and ivy, great card for the challenge, Kate x

So pretty...that is a great upcycled image! love your holly die...I have not seen that one over here yet.

Thanks for taking part in the November Rudolph Days Challenge and good luck in the prize draws.

This is so beautiful Valery Anne ! Love your way of upcycling ! Hugs, blessings and love from Catherine

Well worth all the work you put in to make this card Valery it's stunning and that tile effect is brilliant....xxxx

A beautiful card, love the concept of the window panes by cutting it in to squares, a great idea.
Lorraine

a wonderful make Valery - I love what you have done here! Hugs rachel x

You've done it again with the smart recycling. Bet it looks even better this time around, than originally. Love the grid design & it's such a pretty & festive motif ('specially that Robin!) Also like the way you've let the ivy trail out over the grids. You rocked it once more. TFS & Hugs

That is wonderful, Mrs A! What a great way of recycling

Oh I love this Mrs A - what a great technique and a great way to upcycle and add some real pizazz to a card!

Super cute!!! Thank you for joining us at HIMCR, good luck!!! Amy DT

Great Card! Simply Adorable!~ Thanks for playing with us at Craft Your Passion!
Carolyn, DT

I think this is beautiful x

Stunning card. Love the vintage feel to it. Thank you for joining in the challenge at CHNC Extra for November - and apologies for the late comment.

Thanks for entering both of my CHNC challenges with your lovely crafting - hope to see you again soon. x