It's our wedding anniversary today
and this is the card I made for The Doc.
The digi is from Bugaboo  and is called
'Make it Snappy - Congratulations.'
As soon as Isaw it I knew I had to get it
for The Doc's card.
Remember the good old days when a camera had film
in it which  you had to take all the photos on and
then send away to be developed?
The doc had a mate who when ever he offered to take a photo
would inevitably cut the heads off the people in the snap shot.
Course you wouldn't find this out till long after the event when the
film cam back  from being developed!
I thought this image would bring back happy memories.
Needless to say we had a professional photographer
for our WeddingDay!! 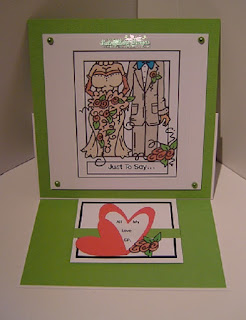 I have chosen to make another Easel card
mainly because it won't then  fall off the shelf it will be standing on!
Image is coloured with Promarkers and
Pearlescent chalks. 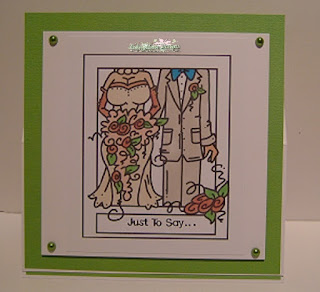 Sentiment is a black plastic peel off and yes the 3 dots
were part of the sticker. I peeled them off and stuck them
down using a lot of  choice vocabulary and tip of a pin! 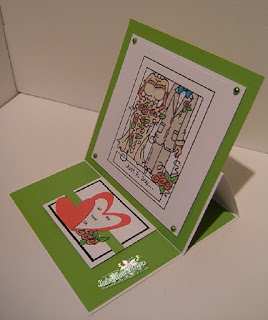 Side view of the easel section.
The black plastic  peel off edging on the placard holding
the easel in place I decided to ADD after I had stuck everything
else down. will I ever learn!!
And no I won't be telling you what the GP stands for either.
Curiosity killed the cat you know!

The doc and I will be going out to a very nice
Fish Restaurant later  for lunch.
We went there last year only to find it was closed on Thursdays
so  hoping being as it is a Friday this yr we will be in luck.
Cheers.
Posted by Mrs A. at 09:00

Gorgeous! Happy anniversary! Have a lovely meal! God yea I remeber getting photos back and getting loads that weren't taken right or the sunlight had ruined them haha!!
Lucy x

Happy Anniversary! Hope you had a lovely lunch to celebrate. Just love your card and the story behind it. It reminded my of the day we climbed Snowdon, taking four hours to get to the top. DH took my photo to prove I got there and managed to chop my head off in the photo! xx LOL!

Happy anniversary! Hope you had a good lunch. Great card with a fun image. Had to delete original comment due to unpredicted predictive text!!

Ha ha!! So nice and fun card! :D
Happy Anniversary to you and your husband! Have a great day!

A Very Happy Anniversary. Lunch together sounds divine. Many More Years Together...

Happy Anniversary.
Brilliant card and sounds just like my Mother-in-Law, she always missed the heads off.

Happy Anniversary to you both...love the card. Hope you enjoyed lunch. Carol x

Belated Happy Anniversary to you! Very fun easel card, Mrs A, the image is so fun, I remember those old photos, it was always exciting to wait for the result, red eyes and cut off heads! It's a pity they don't age well. Have a wonderful weekend sweetie!

Wishing you many more happy years.

Hee hee! This card is brilliant. I love that image and remember those days well.
Happy Anniversary for yesterday xx

Hi Mrs A
It was mine and Mr D's anniversary last week.
Hope you had a lovely day and fish dinner.
Love the card.
Ang x

What a fantastic image. I am guilty of chopping heads off. Love digital and you can take many photos. Happy anniversary to both you and your husband.

Happy anniversary! I'm sorry I'm a day late, but I hope you had the nice lunch you were looking forward to! What a fun card with the heads cut off - it too reminds me of many photos I took with those old-fashioned cameras too! LOL

Happy belated anniversary to you both. Love the super fun image xx

Belated Happy Anniversary, Mrs A and the doc! Hope you had a wonderful day. I love your card!

I'm sorry I missed your special day, but happy anniversary to you both. This card is so cute and I do remember those days of chopped off heads. Or, I got the film back and didn't remember what the pictures were of!

I'm sorry I missed your special day, but happy anniversary to you both. This card is so cute and I do remember those days of chopped off heads. Or, I got the film back and didn't remember what the pictures were of!

LOL, I remember those cameras and missing heads! A cute anniversary card! I hope you had a wonderful celebration!

Belated anniversary wishes! This is a fabulous card! Loved your text too! We all had those disaster photos of no tops of heads or no feet! Hugs, Lesley

What a lovely and funny image Mrs A and belated congratulations on your anniversary and hope you had a good time. x