This is what I have been busy on for the past fortnight. 3 commissions which needed to be completed by this Weekend in order to be sent  on their way for eventual delivery to Yorkshire .  The first two are material advent calendars for a brother and sister. Both slightly different  as I never make two items exactly the same. 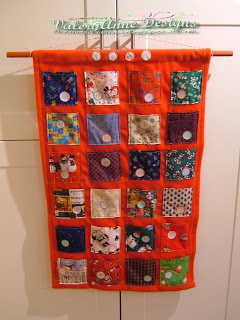 The pockets have been made from Christmas material charm packs  which ended up being a story in itself to  get them in time. Because I needed 48pockets I bought from several suppliers in order to get a nice selection  to use. 2 packets arrived safely but the 3rd failed to turn up and time was getting on. Added to that the supplier was on holiday in Australia so couldn't send a replacement. Eventually the packet did turn up in the post 2 weeks after being posted. It had been addressed to the wrong number and my neighbour had simply put it back in the post !!  Talk about panic stations as I couldn't  make the decision of which pockets went in which order until I had them all. 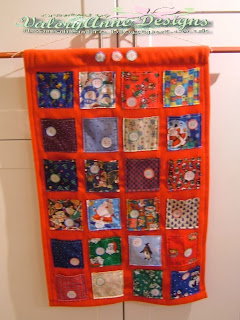 The last item is an Elf on the shelf for a brother  and sister (but not the same as above)
He will be causing mayhem no doubt  when he arrives. He is made all from scraps except for his trousers which I needed to cut into a fat qtr for.  Red material left over from calendars and felt , buttons, bell, ribbon bow and acrylic paint from my stash.  I had
forgotten to write down the instructions from last time  on how I made the neck plate to attach head to torso so had to create one on a  bit of a wing and a prayer and make it fit. 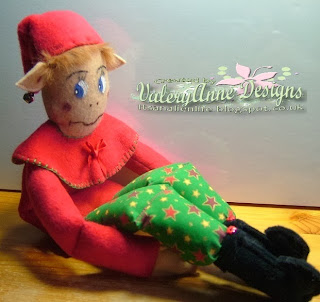 As soon as the gates reopen I shall be entering him into rather appropriately
Pixies Crafty Workshop #99. Use your  snippets.
Add into the above mix the saga of the eBay seller from hell and I  have been rather a busy little bee.Hopefully relative  calm has now been restored and normal  services can  be resumed. Phew!!
Last two cards for my Guest Designer spot for November at Crafty Hazelnuts Christmas Extra coming right up.

Very clever advent calendars. My Grandma used to make advent calendars for the little children. I miss them. Maybe I will make them next year. I would love to fill the little pockets with gifts for all ages right on to adults. Love your clever little Elf on the Shelf. Creative Bliss Dear...

Oh wow the calendars are absolutely great ! and then I saw the elf too oh my how cute LOL really gorgeous all of them huggles Sue xx

Your projects are amazing and all made with so much love! The expression on the elf's face is hysterically funny to me :)

They are wonderful Mrs A! I love the advent calendars - they will become family heirlooms and the pixie is more than welcome in my home if he would love to live with us - just have to hide him from the devilish dog though! Gorgeous creations xx

You should enter him here too:
http://www.sparklingblackrose-craftmylife.blogspot.co.uk/

anything goes but cards - he is fabulous Mrs A xx

So glad the patchwork squares turned up in time... hope your back gets better soon too... hugs Mxx

Oh the calendars are absolutely adorable and of course your elf is too cute. Great job on both projects.

The advent wreath is wonderful and will bring many happy memories for those children.
My grandkids have one each and sometimes forget before they leave for school to look for their treasure.
They are so excited when they come home from school to look into their pocket.

The elf is a sweetie...there are whole boards on pinterest to set them up in scenes to amuse!

The calendars are so pretty and know they're going to love them! Very pretty. The elf on the shelf.......I'll be smiling for two days now! He's adorable!!!! TOO cute!
Lynn

I love your creations Valery Ann ! You are so talented ! Hugs, blessings and love from Catherine

Hi Mrs A,
you are a very talented woman.
Such superb creations. Love them all.
Super colours used too.
Have a wonderful weekend.
Lots of love. Jenny L.

These are great creations Mrs. A. I have always thought of doing these for my sons, but it hasn't developed past a though process, lol. Might manage to get them done for next year, eh?! You are a very talented, and patient, lady. Lynn x

That was annoying not receiving the fabrics on time. I always keep my little bits of scraps as well you never know when they come in handy.

Oh wow Mrs A they are awesome calendars and the material used is stunning too and nice they are slightly different and of course your elf is sooooo adorable you really are so talented .....hope your back is getting better take care xx

You have so much artistic talent. The calendars will be keepsakes for years to come. Your elf is so cute. He will be cherished as well.

You are always so funny, Mrs. A! Your widdle elf is a hoot and I swear his face looks like he is thinking, "Oh, Lord, this neck plate feels a bit iffy to me!" Thanks for the laugh! Lovely sewing, in all seriousness, on him and on the advent calendars! Hugs, Darnell

These are brilliant! Love your elf on the shelf. You are a super seamstress!!! And your advent calender is perfect. Hugs, Lesley

Oh Mrs A! You really are such a clever girlie. I love the Advent calendars and of course the elf on the shelf stole my heart. Such a wry expression you captured there - absolutely perfect and what fun times he'll have next month.

Still not right here but determined to be fine for Bath - look out for me staggering out of the house carrying a load of pillows for the coach :)

AND, you hopped in first this week too - well done!

Love the wall hangings, but my god, that elf is just fabulous! Look at the expression on his face! "Nope, wasn't me, I've been sat here like a good boy the whole time"!! Love him! No internet for my folks, not sure my mam could cope with that! She likes to make little cards though, does a lot of decoupage and likes to try out different card making styles she sees in the card magazines.

Fantastic projects Mrs A you are so very clever & versatile! :) Cathy x

WOW Mrs A. you are simply amazing ...just adore this, fabby work esp the little elf how cute is that you are sooo clever!!
.. and cant believe folks like your neighbour who just do that.. did she not know you lived nearby?? sometimes you do wonder about folks.
Shaz in oz.x

Busy, busy, busy! That's a lot of pockets on the advent calendars. Love the elf! They're very popular here in the states!

Lovely Elf there Mrs A! Pleeeeeeease can we have one for the Playground? It would be so much fun to have mischief and mayhem in the playground.
Hugs
xx

Brilliant needlework here Mrs A. You are clever.

Hi Mrs. A - saw your elf on the snippets playground - had to come and "meet it in person" - fantastic - and then I get another treat to look at - your beautiful Advent calendar - you are so talented!

Great calenders, but I have fallen in love with the elf - fab.
Linbyx

The calenders are terrific but, like Linby, I'm stunned by your elf ... in fact, I think I'm in love :)) He's brilliant! Elizabeth xx

Loved the beautiful Advent calendars, and I heard the pain from anxiously awaiting your fabric too. But like all the other commenters, I'm in love with the cutie Elf. What a perfect Snippet entry. He's simply adorable, with a charming expression. He will brighten someone's Christmas day perfectly. Clever you to design & create such a wonderful little creature. TFS & Hugs. Hope your back is improving too. Sorry to hear your fun outing had to be cancelled.