My Third week as a Guest Designer for Cupcake Crafts.﻿

The theme for this weeks challenge is Le Tour de France, anything French related.
As with previous weeks an idea popped straight up.
I had visions of a French onion seller on his old black bicycle entering Le Tour de France and stopping off to sell his wares along the way! (Onion Johnny is the nickname given to Breton farmers who, dressed in a stripped shirt and beret, riding a bicycle hung with distintive pink onions, selling door- to -door was once a common sight.)
I wanted to make a Chunky 3D ATC (these are traditionally made from blocks of wood measuring 2.5" x 3.5" and 1.5" in depth) incorporating my idea so rounded up a few items to get started. 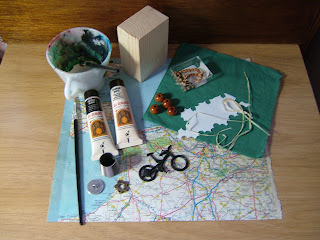 I have a confession to make. Though picture is showing a block of wood it arrived in the post too late to use. I needed to get  this started so made a cardboard shape to the exact dimmensions and stuffed and weighted it to be the same as the wood. (Typically the wood turned up in the post later in the day whilst the replica was drying off in the airing cupboard!)  Once the box had been made up it was covered with torn serviettes (green ones this time) then glued and when dry the edges were distressed using brown ink. .The ATC would normally be upright but I decided to turn on its side to accomodate the bicycle.  I used a French page from an old atlas to cover all the sides, then painted over them using a diluted wash of white acrylic paint.  4 large wooden beads made the feet.﻿ 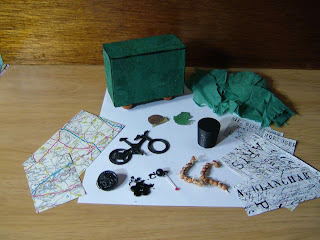 The decorative knob on the top is made with a metal cap from a perfume bottle turned upside down and metal buttons, all painted black and then rubbed over with Inka Gold for a distressed look.
The bicycle came from a necklace, again painted black and the onions were small wooden beads tinted pink (using a promarker), then strung with raffia string. 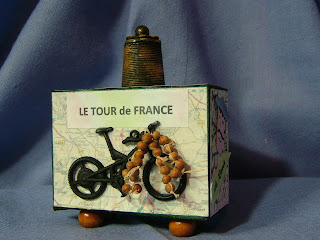 The back is a collage of items associated with France i.e Eifel Tower, frog, snail, whilst the sides have signposts written in french, a Frenchman with his beret and the French flag. 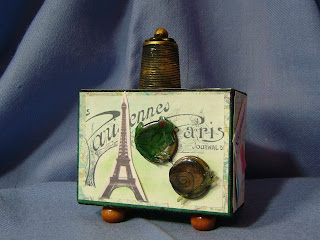 ﻿
﻿Pop on over to Cupcake Crafts to see what inspirations the Cupcake Team have in store for you.You will have till Sunday 8.00pm to enter your own creations with a chance to win a prize or be a Cupcake Cutie.

Fantastic....love how your recycle your items.

Who would have thought you'd get so much detail in such a little space....just fab.
Hugs,
A x

Good morning Mrs.A!! What a gorgeous box! Love all the dettails and that bike is just so tuff and sweet at the same time! Have a wonderful day! Hugs and sunshine

I'm gobsmacked at all the stunning little details you've packed onto such a tiny space! I love those onions!!

Just gorgeous Mrs A. What a fantastic idea with the block, looks so nice. I love Paris it is one of my favortie places (but that might be because I can get there quick on the DREADED PLANE....Not a good flyer unfortunatly!!)
Debbiex

What a great idea and I just love Paris as you can see from my entry.

Wow - it's just brilliant! Love the touch of the onion string! x

Great job you have done on this Mrs A. Nothing like a little resourcefulness, recycling or remodelling! 3 r's there see so must be good!
x

Oooh its great - I would have gone with the onion seller on a bicycle too!

Wow, that is stunning. Popped over from MiM via my blog.. thanks so much for your lovely comment.

What a stunning creation Mrs A ! You are such a talented Lady ! I've got to tell you that until I came to live in England I had never heard about french people selling onions in England !!! Hugs, blessings and love from Catherine

truly Awesome project Mrs A! Just love it. Saw it on MIM and had to check it out - so glad I did. Also wanted to say a massive thanks for your beautiful comment on my blog. touched my heart.
Cheers
Stamping Shanni

When I was a student I lived in France for three years. Never cared much for the Tour the France thing, but I LOVE onion soup! Your project is such a fab one - many France related "stuff" so nicely put together. Well done!

Awesome projects... I saw your design at MIM! Shirl~

What a great idea! I love them onions!
Hugs
Bernie

I really love this. I like the use of the Atlas - it ties in so well with the bicycle! You are so clever.

This is just so amazing. The detail is fantastic. Thanks for sharing. Ali x

beautiful creation! Thanks for playing along with our No Cards challenge this week at My Mums Craft Shop! Gemma :)

Fantastic and what a brilliant way of recyling:)x

Mrs A... wow your project blew me away!!! Even hubster (who is French but doesn't have a stripey jumper and onions) was well impressed! Great idea! Thanks for embracing my challenge, Shelly x

what a great project! you are so fantastically inventive :) x

Unique and inventive! I saw your link at MIM. I'm #82 this week, I'd love it if you stopped by.

A very impressive ATC - well done, it's great. Hope you have a good week.

Hello. I popped by from MIM to see this beautiful Project..Loz

what a fab idea ,...love the recycled embellies...
thanks for joining us at MIM and good luck
tracey x
Remember, to be in the running to win the prize from our sponsor this week just leave a comment for another entry. Be sure to mention you saw them on Make It Monday. The more entries you comment on the more chances you have of winning

what a fab idea ,...love the recycled embellies...
thanks for joining us at MIM and good luck
tracey x
Remember, to be in the running to win the prize from our sponsor this week just leave a comment for another entry. Be sure to mention you saw them on Make It Monday. The more entries you comment on the more chances you have of winning

So inventive, as ever...love the onions and your decorative knob is a great idea... :)
xx

Hi there! Saw you on MIM. Just wanted to let you know I have blog candy if you're interested. :)
My Blog Candy

Oh my gosh, this is fabulous! How totally unique. I love the way you even included the Papillon stamp in your French theme... no detail left unturned! Thanks so much for sharing your art with us today at Frilly and Funkie.

Isn't it typical that the wood arrived a little too late but I suppose you can use it for another great project.
I think my toadstools must of had a bit of the magic mushroom in them as we have had a rain free day today.

Have a good week

What a lovely idea, and it turned out GORGEOUS! Love it to pieces, it's absolutely stunning! The recycling is brilliant!
Stunning details too.

have a nice day!
hugs
Hanna

Thank you for joining us at Charisma this week! x

How wonderful and unique --you make such stylish extraordinary projects!!

Fantastic chunky ATC and brilliant idea too ! Thanks for joining us at Frilly and Funkie. Sue C x

Oooh this is fab Mrs A, such a neat and clever design and I love how you tell the story of your project with piccy's...fab work as always :) Donna ♥ x

I saw the little bicycle and had to come take a peek. WOW, In can tell you put a lot of work into your project. I saw it on MIM.

I saw your card at MIM and loved it, what a gorgeous card. Good luck in the challenge. JOx

Wow! You deserved to be a winner! Hugs, Lesley

Very cool piece of work - so cool the way you recreated the wood block for the base. The bicycle is wonderful and I love the way you made the onions. Super job on the altered metal challenge. So great to have you joining in the fun with us this time around at Frilly and Funkie!