My secret is out. I can finally reveal that I have been asked by Cupcake Crafts to Guest Design for a month with them as I have been one of their Cupcake Cuties. Wow. Did I need asking twice!!  First off I get to display this fabby badge each week.﻿

The theme for this weeks challenge is to use bright colours and buttons. Well there was only one idea that popped straight into my head and it would invlove using loads of buttons.
100 buttons to be exact (in for a penny, in for a pound I say). A good deal of sorting out and here is my pile ready to start. I needed a base card and I had just the paper to use that had been sent to me by my lovely blogging friend Barbara of  Barbara's World of Whimsies.I had been lucky enough to win it amongst a selction that Barbara had offered on her blog. 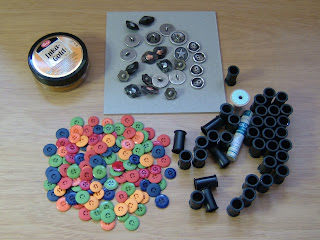 So lots of sticking and gluing later and this is what I made. A Medieval Chess Set complete with design paper base. I used a red promarker to colour in alternate squares to make the checker board  effect. 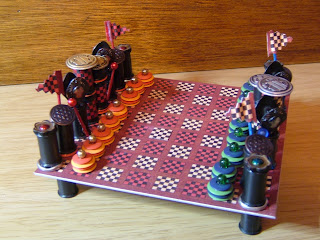 The pawns were simply made from bright buttons and a pearl on top. The black sets colours are red and yellow with gold , whilst the white set uses blue and green with silver. The knights are depicted with a shield and jousting pole, the bishops by their hats and staff. The Kings and Queens of course have their crowns shown on buttons  in gold and silver. I really enjoyed making this. 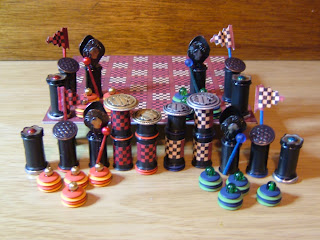 And for those of you that play chess this is Checkmate for the White King who in effect can't move. 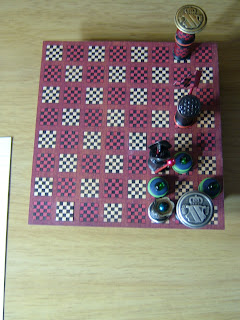 Please pop over to Cupcake Crafts and see some of the other lovely makes by the Design Team for this week and maybe even enter the challenge yourself.  Thankyou to the Cupcake team for inviting me along. I'm looking forward to joining in again next Monday.

Wow, it's a fantastic Chess set, very clever use of the buttons, love the knights and bishops. What a fab start on your GDT post!

Oh wow what a fantastic creation, so original, it's just brilliant.
Thanks for sharing it with us at CraftyCatz this week.xx

Wow Mrs A, this is absolutely genius and would make such a fantastic gift for a chess player, your creativity shows no bounds and we are so lucky to have to guest design with us at Cupcake this month. You have totally rocked this challenge :) Donna ♥ x

wow what a piece of art this is very imaginetive and thanks for sharing with us over at crafty catz...sassyx

Wow Mrs A Thats fantastic news and l'm sure you'll do them proud judging by your creation here its stunning well done:)x

Oooh love this - very original! congratulations on being a guest designer - have fun and I cant wait to see what other creations you come with!

Fantastic. Thank you for joining our challenge this week at Charisma Cardz Challenges

And I must say, this is another creation that proves how worthy you are: It's amazing!

WOW Mrs A - this is stunning! Well done on the GDT role - so, so clever! Back online after a glitch here :) Midnight oil commenting I think! Di xx

wow how great is this and thanks for sharing at CREATIVE this week.

Forgot to thank you for sharing with us at Creatalicious Challenges.

Wow this is brilliant and such a fabulous idea.
Hugs Louise xx

Wow, wonderful creation! Thank you for joining us at Creative Inspirations Wedensdays Challenge

Wow, an awesome project, such a great idea.

That has to be a labour of love! Brilliant Mrs A and I am sure the boys will love playing chess on that, once they have got over their hangovers!
Who is a clever girl then making the DT? Tell you what, have an extra chunk of B&B pudding! I won't tell!

CONGRATULATIONS Mrs. A on your GDT spot! And WOW what an amazing creation for your debut! I like to think outside of the box myself sometimes but this takes the bishop - I mean biscuit! Fabulous chess set. Love your button pawns, your castles with their crenulated towers, the bishops with their fancy "hats", the knights with their shields and flags and of course your royalty with their coats of arms. BRILLIANT! The chess board and "bodies" of your pieces clearly took a great deal of time too. And thank you very much for the lovely comments you leave on my blog! Hugs, Lesley

First of all, a huge warm welcome to Cupcake Mrs A! What an amazing chess board!!! You totaly rocked this weeks theme! Can't wait to see what you come up with for the next challenge!!! Hugs and sunshine

Wow that is fantastic and sure it will go down well as never seen a project like this before, well done

what a blessed person you are... filled with creativity...really its a masterpiece...

thanks a lot for stopping by placing your valuable comments... feeling proud ...and happy when people like you encourage me...!!!

Wow!! Very creative. Thanks for joining us at Creatalicious challenge
Louise

I utterly love the chess set! I have chess mad son so have a few sets around but this is just amazing! Congrats on the DT position how wonderful!
To answer your question about the jigsaw on my blog - It is a cuttlebug die - cut out 3 times and glued together then a 4th card stamped, coloured then diecut and added on top this makes it more like chipboard (the die only cuts card) I will give it in the box jumbled up they have to put it together to reveal the sentiment which reads If I had a flower for every time I thought of you then I could walk through my garden forever - Alfred Lord Jennyson

Thanks for stopping by x Janet

First of all congratulations!!!!!

Your idea is absolutely fantastic and so creative:) Wonderful.

Congrats on being a guest Cupcake! This is such a clever, inventive chess set. Love it!

So, so original and a fantastic way of using up your button stash. AMAZING!

You are just brilliant Mrs A! What an original project. Looking forward to your nexct project already.

WOW what an Amazing use of those buttons!! Unique and fab creation Mrs A!!

Another stunning project, what incredible ideas you come up with Mrs A! Are you actually going to use it, or keep it for display?

OMGoodness I love this chess set! How wonderful is that idea! So creative and fun that I want to make one - guess I best start saving buttons! I am happy that you had a perfect use for this paper - thank you for your kind words and link to my blog. It was my pleasure. Your chess set is a WOW! project! Wishing you a happy Sunday!

That is brilliant - I love it!

How amazingly clever and looks like so much fun to create.