I had seen an example of a card to make in a magazine and as it was all in pinks, flowery , butterflies and had a dreamy effect to it thought I would have a go at my own version.  So straight to the snippets folder (that is bulging at the seams) and pulled out the papers below. The stamp I had already used on a piece of paper and not used when I made my altered book for Sherry. I used my Spellbinders 'Rose creations die' but left the petals flat instead of sculpting into a rose shape. (what a diference it makes). I added stitching to the edges before matting onto pale green card stock. Butterfly die is  Spellbinders trio S3-146. 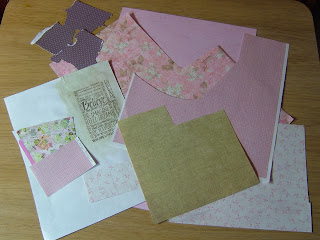 The magazine said 80mins to make. Huh! Which 80 mins would that be then. Several of my  80 mins later here is the result. I was going to add a flourish or two but think the card works perfectly as it is. What do you think? Entering into Pixies Crafty Snippets. I even left the threads hanging for you Sherry!﻿ 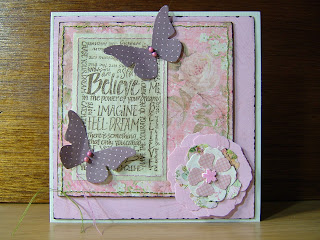 One stitch at a time:  Stitch it.
Fab 'N' Funky: Polka Dots.
Divas by Design: To die for.
Paper Play Challenges: Use a die.
All Sorts: Any die will do.

Such a pretty card! I'm glad you kept going after 80 minutes--it's fabulous! LOVE the sentiment panel and the butterflies and the way you left the rose die cut flat is genius! :)

wow Mrs A. you are certainly going to have a long play being first into the playground love the snippets creation, Shaz in oz.x

Such a pretty card! Really like the stitching. Thanks for joining us at OSAAT this week! Best, CG

It looks so beautiful in pink

Gorgeous card lots of lovely elements to look at.

That is one VERY PRETTY card. Your snippets folder must be a little less bulging now!

A really lovely card Mrs A - I heard you rattling the gates at midnight :)

Love the colours (natch!), stitching, and the flower is great too. Did I mention the sentiment and butterflies? Thought not - it's all round fabulous and perfect as it is without flourishes. A beauty :)

Hi Mrs A, Absolutely stunning and to see what you started with and the end product its............gorgeous enjoy your day:)x

Hi Mrs A, your card is so pretty and definitely dreamy. Love your choice of papers and gorgeous sentiment stamp...perfick! :) Donna ♥ x

Ooh so fabulous! I do love a hanging thread - lol! I dread to think just how much time I've spent on craft projects!

This is such a gorgeous card Mrs A ! Love the soft colours and the stamped sentiment is so lovely ! Love the flower too ! So pretty ! Hugs, blessings and love from Catherine

Art From The heart said...

Beautiful,love the colors too.
Sounds like you're having busy fun !
Big Hugs

This is very pretty! My cards usually take at least an hour to make, too. :D

Thanks for leaving some love at my blog recently...it was nice of you to visit!

Perfect just as it is! (I think I might have these papers at a bottom of a drawer!) First in the playground must mean extra time on the swings and the climbing frame!

Looks like the several 80 minutes were well worth the effort! LOL. It turned out beautifully!
Thank you for joining us this week at Fab'n'Funky!

So beautiful...Thanks for joining us at Fab'n'Funky & Divas by Design this week.
Wendy xx

Such a pretty card and love the before and after shots too. Hugs, Amanda x

Hello! It's been a while since my last visit, how are you? This looks gorgoeus. So elegant, & I love the beautiful colour scheme. Thanks for joining us at Divas By Design.
Big Hugs,
Andie xx

Ooo er Mrs! What a pretty card and such pretty colours!

What a gorgeous project! Thank you so much for entering it in our challenge at Allsorts this week and good luck!

Lovely snippet card, very pretty colours and the flower is gorgeous. I like that you thought to photograph the papers used ... it's interesting to get an insight into your methods. Elizabeth x