On my recent blogaversary 5 followers got to choose an item to be made by me for them. Monkeys friend Jam is already on his way to Terry in America as Terry asked me to make a monkey for her. 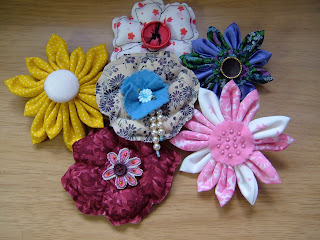 Ali asked for a flower brooch to wear with her grey dress so I made her up a selection which I thought would all go with grey. The blue one with the pearl dangles is made from real Japanese silk material whilst the 3 flowers with pointed petals are called Kanashi blooms and traditionally are what the Japanese Geisha girls make to go in their hair. Ali has received these now so I can show.

Sherry, Fluff and Bernie your gifts will be with you very shortly.

I am entering these as my Monthly Make for April over at The Felt Fairy.

We have the central heating fixed! You have never seen such an amount of pipe work that we now have in the airing cupboard. The offending piece of pipe causing all the bother should have a 1/2" diameter which had been reduced down to a tiny pin prick hole due to a build up of sediments. Silence is Golden (remember that tune Sherry) in our airing cupboard when the hot water is running.

We also have the phone line back up and running after a whole week. When the engineer removed the manhole cover to fix the repair he found the hole filled with water. Thought he might try saying 'I don't go down holes filled with water'!!! We have compensation too. The Doc rang the BT call centre in "India" and complained and the very nice operator gave us a £4 discount. Wow. We are very carefully deciding what to spend our windfall on!!!!!

Have a great weekend. We are spending ours with Sweet Cheeks.

Mrs A - thank you soooo much they are gorgeous xx (Ooh dont spend the £4 all at once!!)

I wouldn't be surprised if our pipes were completely blocked - although we do still have hot water! Ohhh £4, decisions, decisions - LOL, better than nothing I suppose.

Hope you're having a lovely weekend with your family x

... forgot to say, your flower brooches are beautiful - the yellow one would have gone nicely on the Queen's outfit this morning!

Glad you are getting all your problems sorted out, and, hopefully, you will have now decided how to spend that fantastic windfall. thank you so much for your visit to me and for your encouraging comments.

Craft and Activities for All Ages said...

Love the pink and white brooch - fresh and pretty! Nancy

These flowers are beautiful. I had an award for you on my blog which I think you haven't picked yet. Post title- "I've been blessed"

Mrs. A., I am just in awe of you. I love the tidbits of life happening - what a nuisance with the pipes - you must be glad that's over with. HAHA I love your talent, woman! You are amazing! I am thrilled. I received my lovely JAM and he and Terri Anne are having such a wonderful time. She is telling him how boring I am and how I just sit and craft all day but now she has a friend and won't be neglected. I had to put them on film! :-) I'll have it uploaded later today so everyone can check it out. Thank you so much for being so creative and bringing me such joy! You have fulfilled much happiness being so generous. Thank you, thank you, thank you! Oh! I love those brooches - my goodness, they are gorgeous. You really make everyone feel wonderful you know!

...and wow what fun and games you have had with those pipes, you deserve a medal and much more than 4 measly pounds...
.. and yes am having a wee break from my calligraphy but heading for bed now. I am really late returning my WOYWW greetings this week but better late than never... next week I have a new visitor to show!
love Shaz in oz.x

Hi Mrs A. I spotted these brooches on ali's blog and just wanted to pop by and say how beautiful they are, I love them all.

Hi Mrs. A. Your Artful Bag ATC finally arrived today (the fault of the Canadian postal Service, not yours, no doubt) and it is gorgeous!! I can't get over how you made those tiny pleats and the beaded handle! I love the card and the additional ATC as well, thank you so much!!