This is all the pieces knitted and blocked ready
to put together. They were really quick and easy
to make. I did them all in one evening. I had read
you can do it in 90 mins 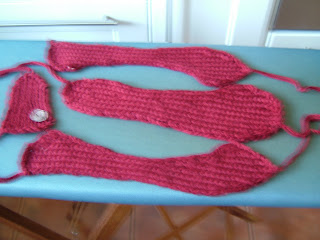 ! I wasn't that fast.
You knit the sides and tabs using 2 strands of yarn together and the sole using 3 stands of yarn.
I found this pattern on the web.
It is by Melynda Bernardi of French Press Knits.
I purchased it and within a couple of hours I had the pattern sent to my e-mail as a PDF file.
The instructions on how to felt them are included
too.
Most instructions for felting that I have found are expecting you to be using a top loader washing machine. Here in England we mostly have front loaders which of course you can't open
mid cycle to check on progress of felting so I
devised my own system to felt the slippers.
Here it is.
I used:
1 plastic container with a lid
washing up gloves + old pair of knitted gloves that fit inside.
Tongs
washing liquid
(When using a top loader it is recommended to throw in some old shoes and tennis balls to help agitation) I compromised and used six golf balls. (We live by a golf course and we have a ready supply of them in our garden all year).
I started with the tabs first so I filled the container with water boiled from the kettle threw in the tabs, squirt of washng liquid and the golf balls and snapped on the lid.
I donned the gloves + washing up gloves and proceeded outside with the container into the garden. I should add at this point that this was about 2 weeks ago during the spell of deep snow and freezing cold so I was also suitably attired.
If the neighbours had been watching they would have seen me doing a type of war dance on the spot shaking the tub first one way then the next and up and down. (I might actually have devised a new keep fitness program).
To cut a long story shorter it worked.
Checking progress every 5 mins and 3 kettles of boiling water + one exploding golf ball ( don't ask) later the tabs were felted.
The slippers took 5 kettles of water and a considerably longer war dance.
Post script
I have now bought one of those mini washing machines ment to be for caravans. Basically a large bucket with a lid and a paddle in the bottom which sits on a base with the electical controls . You fill with hot water and plug in. It has a timer which you can set from 3mins to 15mins cycles. Ideal for the job I think. Will let you know on the next felted project. I have my eye on a felted bag with Pears decorated on the side.
Posted by Mrs A. at 12:54

I'm glad you're not telling us what NVUH said this looked like! x

hi, thanks for comment, i got the yarn for the last scarf from loop (http://www.loopknitting.com/index.html) i bought it in the shop tho, so not sure what it's like for ordering.

p.s. the slippers are cute!

Hello there "Alien". I cannot begin to tell you how much I enjoy Fluff and the commentaries there. It is such a delight and something I look forward to always. Plus, an added thrill is when the whole family gets involved in such banter - it really makes for a wonderful day. Thank you so much for taking time to stop and make a lovely comment on my blog. It is so thoughtful and an easy way for me to stalk yours now. LOL! Just kidding. I love knitting though I can only do the basic stitches - made a vest once (20 years ago) for my little one. When the twins came along, I said, okay, enough knitting and never took up the needles again. But I do want to. Your slippers are fantastic!

Hi, the things we do, eh. But the end result is fab.

That seems like a workout in itself, I honestly don't think I would be able to remember what I should be doing - what with all the giggling about as well :-)