It's a Snow Life.

Time once more for the girls in the Chrstmas Card club to show our next theme's card which Kate chose.
Snowman/men/Snow families. I do have lots of digi stamps I could have used but these two stamps were in my christmas box just jumping at me to be used.
1st card.
Uses a stamp by Woodware called 'Skating Snowmen'  and I have teamed him with a freebie paper from Crafts Beautiful by Alison Butler. I always colour my images up first and then go and hunt out a paper to match. So far it has worked out!! Coloured using my good old trusty Graph'it pens and a silver gel pen. The sentiment is by Studio Light. The strip of green card was lurking on my desk so I stuck it on for good measure.  Inside of card is also decorated with a strip of the design paper that was left over. 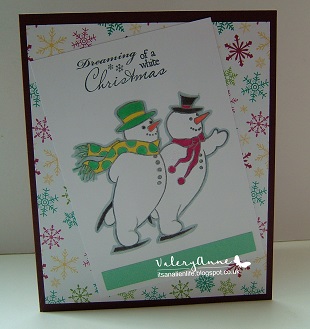 2nd card.
Uses a stamp by Two Jays  called 'Cheery Snowman'. Again coloured with my graph'it pens and then searched for a pattern paper to go with it. This one is from Making Cards 2016 called Christmas florals. ( Oh, If we only knew then what Covid delights were in store for us).  I have matched up the holly berries on his hat! Sneaky or what. Strip of cardstock was hiding under the  green strip above so as I had clocked it and with no fresh place for it to hide it had to be used. The round the corner sentiment is by  Phil Martin from his Scribbles Christmas Corners Set.  The let it snow was from the same Studio Light set used in card above. 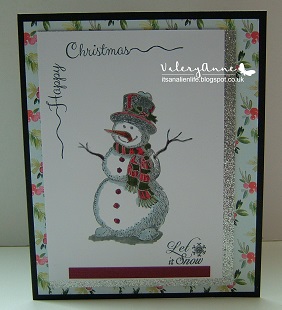 Just been for a trip down to the hospital this morning as The Doc had to have a Covid Swab Test done prior to him going in on Wednesday for a  planned medical  procedure so we are now in lockdown. Had to get the food shopping delivered a day early so we can be totally isolated for the next few days.

You made beautiful Christmas cards with the funny snowmen Valeryanne.
Good luck and strength to The Doc. love xx

Aww these are just wonderful cards Valery, I love both the images and your designs are fabulous.
I'm isolating as I was pinged last week, no results as yet, but I feel fine.
I hope the Doc gets on okay with his medical procedure, take care, Kate x

Your cards are beautiful and nicely colored Mrs. A. I hope The Doc's procedure goes well. I'll be thinking of both of you and sending prayers.

Super cards Valery Anne. It is amazing how many snowmen we can all find. Love your two cards. Zoe x

Great choice of snowman stamps for these cards. Hope all goes well with the Doc.

Wow, you are lucky! I color first and never find anything that goes with it! Skating snowmen are so fun and I love the green polka dot scarf and matching hat. The corner sentiment on the second card is very pretty and just sparkles. Beautiful coloring on him and the sparkle paper is a lovely touch.

I also wanted to wish Doc well on Wednesday.

Fun snowy cards! Lovely coloring....really like your technique of outlining with the silver gel pen. Need to remember that!! I am impressed that you can find such great background papers to perfectly match your coloring. Your stash of pp must be as big as mine!! Ha.
We have flakes in our forecast for the next few nights...not sure if we'll get any, but it IS October! We'll get frost, even if we don't get snow.....so there goes the garden! But that is okay, because I am soooooooooooo done gardening for the season. I picked the last few green tomatoes, small zucchini, and immature peppers yesterday. So let the frost do its thing. Of course, I will still have to go out and put the garden to bed for the winter, but at least all the harvesting and watering is done for the year. And... we thankfully have safely made it through another fire season.
So I say.....Let it Snow!!!
<3 J

Two great cards and papers love the snowmen images and the fonts of your sentiments.Hope all goes well with the Docs medical procedure and he is soon back home.
Carol x

Love both of these but especially the happy skating couple.

Hope all goes well at hospital, we had to do the same for youngest son Alex when he went in for his knee op.

Hi Mrs A your cards are gorgeous. Have a good week. Take care. Hugs Jackie

These cards are adorable!

Hope all planned goes well for your hubby. Lovely snowmen cards, and really like the happy first one!
Hugs

Fab and fun snowman Christmas cards - both so gorgeous! I hope The Doc's procedure goes OK on Wednesday. I will be having a Covid test on Saturdsy prior to my first Cataract op a week Tuesday. Take care. Hugs xxxxxxxxxxx

Both cards are lovely l just adore these snowmen love the shading around the edge/outline of the snowman on the 2nd card and the backgrounds too.....hope all goes well with the doc sending hugs xx

What cute snowmen and the most adorable cards x. Sending hugs for Wednesday x.

It's hard to beat a nice snowman or couple for that matter Valery. Both cards are so beautiful!

Hello there and thank you for visiting my blog and for your kind comments. Life does sometimes have a habbit of getting in the way of things but the nice thing about blog land is that people will still be there for you when things get a little easier and you have more time to post. Your Christmas cards are lovely and the stamps are so sweet. I've been trying to get ahead with mine too. I've only just realised that I wasn't actually following you on this blog, only at your challenge, so I've rectified that now and I'll look forward to seeing more of your posts when you have the time. Crafty hugs, Sandra x

Two beautiful snowmen and pretty papers on each too Mrs A. I need to get on with my Christmas cards too. Hope The Doc's procedure goes well. x

Two lovely snowman cards Valerie…. Good luck fir Weds….thank you fir cusjt8ng my blog and your kind comment I shall now be following you,,,if would be a great shame if blog land disappeared