It's a Pink Thing!

The theme for this weeks show of cards from the Christmas Card Club Girls is to use Non - Traditional colours which was right up my street to use these pretty prints from a Paper pad set by The Paper Boutique 'A Whisper of Winter'. The main colours being pink, brown, cream and pale blue. I pulled out a selection of die cut sentiments and die cutting frames to use  along with Buff, Chocolate and Steel Blue cardstock and got started. I have managed to make 5 cards to swell my growing pile of Cards.  Again I had to wait until this morning in order to take the photos which were all done in the summer house  on the pink table and against the pine wood cladding.
First card. 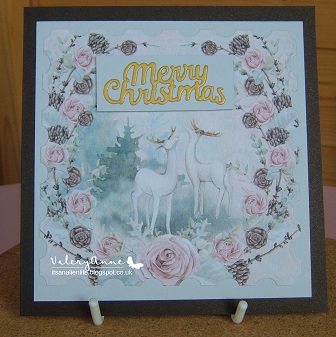 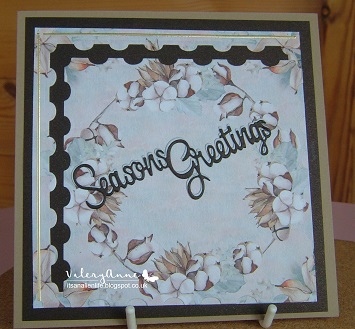 Uses the same die cut frame but this time I have kept the card I cut it from and dropped the die cut down to the bottom to give the interesting drop shadow effect. The sentiment is again by Tonic which I die cut in brown and steel blue and layered slightly off one another. I then added the two srtrips of gold edging to finish.
Third Card. 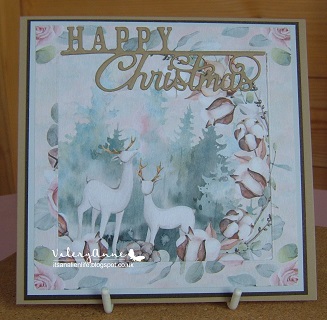 This card is using a frame that was left from using another die cut which I haven't as yet used the inset for but I thought it made an interesting overlay to place a different design from the same set underneath it. The sentiment is a die cut by Creative Expressions CED3046.
Fourth Card. 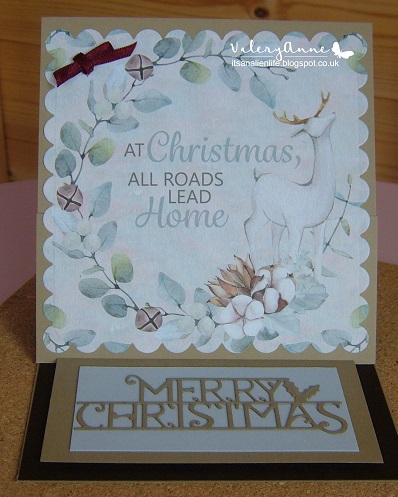 This was actually the first card made but I didn't photograph them  in sequence. An easel card using a die frame by Crafts - Too 'Scalloped Edge'  PCD77 and a sentiment by Tonic.  The bow was an after thought as the scrap of ribbon (waste not want not)  was left over from making the last card below.
Fifth Card. 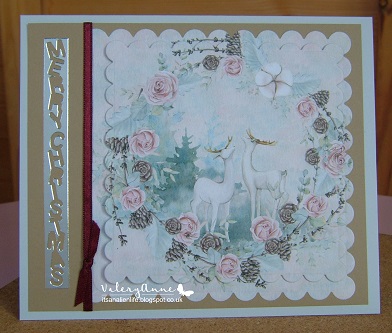 My most favorite of them all with its abundant pink roses and using the burgundy ribbon which was out on my desk from being one of  the shoulder tabs on a jumper I had just bought (on line) and cut off.
Sentiment was the remains of a  silver peel off after using the actual wording on a previous project. I really do use up everything in sight. I have die cut the same design paper out twice in different sizes using the Crafts - Too die set above and layered up very slightly off centre.
I'm off to sit in the Summer house now with a coffee and attempt to catch up with your blogs.
Stay Safe
and if your in the right age range
wait for your Third Covid Vaccine
Call up.
Until then
Hugs

Hi Mrs A all your Christmas cards are gorgeous. I love them all. Have a lovely day. Take care. Hugs Jackie

These are so beautiful, like the images and your nontraditional colors are so stunning with them! Fantastic cards Mrs. A! Take care!

it certainly is a beautiful paper collection Mrs A and you have created some wonderful cards using it. the sof, wintry colours look lovely with your different designs.
Lorraine

Certainly unusual colours for Christmas but they work

A beautiful selection of cards Valery. I love the soft pastel shades and the lovely toppers you've used, all beautifully designed too, Kate x

They are all very pretty Mrs A, I like the pink tones and the handsome reindeer. Lots of love xx

I love the pink colours for Christmas

Hi Mrs A,
these are all so very lovely and such beautiful designs as well.
Love the Paper Boutique paper pads they are so gorgeous.
I have just finished an album for my DIL's 50th Birthday with their papers.
Lots of crafty love. Jenny L.

You have been so busy! Sweet Christmas cards, all so pretty! Love the images of the papers!
Hugs

A beautiful collection of Christmas cards, they are all lovely. You have used a gorgeous paper collection, I actually created samples for this collection when it launched and loved it.
Pauline - Crafting with Cotnob
x

What a fab collection of card Mrs A they are all really pretty..hugs Sue x

All beautiful cards Mrs A. Love all the soft colours and the lovely papers. A fabulous collection. Big hugs, Carol S.xxxx

I never seem to get much blogging time these days, but pleased I managed a visit to see these lovely cards. I love the pastel shades of these papers, so pretty for Christmas.
Avril xx

The papers are so very pretty and your designs look fabulous Mrs A. x.

Beautiful cards! I think you have rocked the non-traditional colours theme!

Such pretty papers and some great designs..you were obviously on a roll Mrs A and they are all beautiful. My favourite is the last one too and I love the contrasting burgundy ribbon and the vertical negative sentiment looks great. x