Another fortnight has flown by again and it is time for the girls in the Christmas Card Club to show our next makes. Rita has asked for Nativity. I didn't think I had anything suitable for this theme but I found a recycled Christmas card front in my stash at the very last minute so have used that on one of my cards. The other one is not strictly Nativity nor Christmassy but I think the image works perfectly on my card. 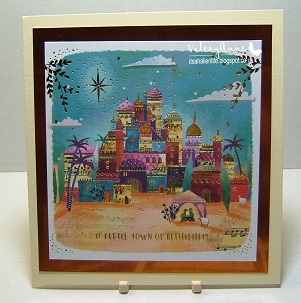 For this card I simply trimmed down the card front to neaten and adhered to a bronze adhesive metal effect sheet. I have had the packet in my stash since 2016 . It is by Xcut and has sheets of Bronze, Gold and Silver. I made a base card from dark cream card stock and mounted the adhesive sheet straight to the front of the card. 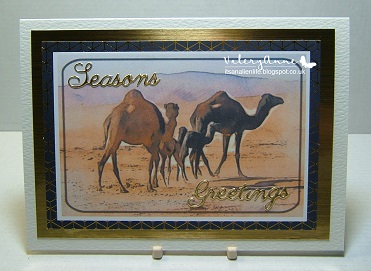 I found this freebie print on  Create With TLC and thought it would make into a card to send to one of our friends that does not celebrate at Christmas but still likes to receive a card from us.
I have mounted the image which is called Morocco Journal Card. onto a midnight blue and gold design card which picked out the colours in the print. I used a sheet of the Gold adhesive metal effect this time and made a tent style base card from pale cream card.  The sentiment is a die cut from Britannia dies  which I cut from an off cut of the gold adhesive sheet.

Another two cards to add to my growing pile  which is still sorely depleted so I must get a move on!

Two lovely cards Mrs A> I do hope your shoulder is improving. Christine x

Hi Mrs A your cards are gorgeous. I love them all. Take care. Hugs Jackie

Your cards are beautiful Mrs A. Great upcycling on the first, and a fabulous image for a non- Christmassy Christmas card on the second:)
Enjoy your day
xx

More terrific upcycling Valery, and perfect for the challenge, even the camels, Kate x

Two great seasonal cards. The camels could always be heading off to collect the three wise men = nativity = 'simples'!! (thinking outside the box).

Great re-cycling and it would have been such a shame to not have used it on your first beautiful card x. Clever idea about card number two and your friends not celebrating Christmas x

Two very lovely cards Mrs A. My pile isn't anywhere near as large as it needs to be either. :(
Lorraine

Two very pretty cards for Christmas, love especially the recycled Christmas card front of the first one, it's just perfect with the mirri and so sweet. Well done!!

Great cards Valery - and thanks for t=your comment on my elf...didn't know that about the gold! Hugs rachel x

Stunning cards, especially the first one, brilliant images and backgrounds. Saw your Daughter today but not too sure that she remembered me, she said hello though.

These cards are really pretty!

A lovely recycled card and I love the camels. That is a wonderful card to send to someone who doesn't celebrate.

Oooh both your cards are sooo pretty...the first one looks like Aladdin's castle!!! So whimsical and beautiful
Cheers
Dr Sonia