Each year I plan to do an Easter type card and fail so I was determined this time to make a card for Spring instead.
It is quit a big card being 8" x 5.5" but the size is due to the scalloped die cut I used for making the blank card base.  I have been trying to buy some more scalloped card blanks for ages but couldn't find the size I wanted when I came across this Large Scallop Card die by 'John Next Door.' As it was practically the same price as buying a ready made pack of blanks it won hands down. I also bought the Small Scallop Card die too. Now I will never run out of blanks, just cut my own. p.s. It also cuts like a dream with the added bonus you can cut the pattern paper with it too. 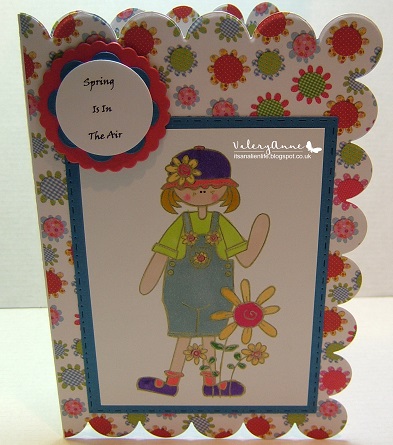 The digi is by Robyn's Fetish called 'Daisy Days'. Coloured using my Graph'it pens for a change and a gold gel pen. As usual I colour the digi first and then (with heart in mouth) go and look for a paper to match/compliment it.
I found this freebie one from Making cards August 2014 'Patchwork pals' had a flower on it in almost the identical design as the large daisy I had coloured in on the digi!!!! Luckily the sheet was large enough to die cut , then cut it in half and add to the front and inside of the card. After colouring I mounted onto blue card stock cut using my Prescut  Rectangle die Stitch Hole PCD98. The sentiment was computer generated and cut with a woodware circle punch and then adhered to two further dies. The blue being Xcuts 'Bloom' die  and the rasberry red Sizzix 657552 'Scallop Circle' die.  Below is a close up of the digi  showing the gold gel pen detailing which really sparkles as you turn the card to the light. 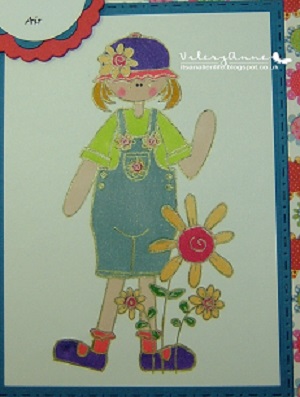 A beautiful card Valery Anne and a great find with the scalloped edge die.

Lovely card, you have done so well buying that scallop die and making your own card bases! How lucky find a DP with the same flower of the cute image!!
Hugs

What a brilliant die Mrs A! And as you say perfect for cutting your own matching paper too... great card.

Love those dies....they are a great investment...and such a sweet image on your lovely card....hope you are enjoying the lovely weather....just put my washing out ......xxxxx

Dies are what I consider tools of the trade. This one is a great, fun, shape. Your digi girl is so cute and great coloring on her.

Hello Valery, love both of your cards and the scalloped cards are super, looks like that die is going to pay it's way.
Lovely image and beautifully coloured, Kate x

Cute image and the scalloped card base is lovely, definitely a good move to buy the dies!
Chris
x

Cute image and that die was a good purchase compared with buying expensive blank scalloped cards.

What a super card die and an added bonus that you can now get the background paper to fit perfectly.
Fun image, love the feet.

Hi Mrs A this is a stunning card. I love it. I must admit that I have that die set and I have not used it yet. You have inspired me to have a go. Have a great week. Take care. Hugs Jackie

Hi, ValeryAnne! Always a pleasure visiting your blog home and seeing what you are up to. Your little flower lover is darling with her rosy cheeks and cover-all-bibs. I like that her shoes and cap share the bold blue and orange colors for balance, and all those dancing flowers in the background! Darling creation! Thanks for sharing your crafty project at the Moving Along With the Times Challenge Blog, and for supporting us. We hope you will visit again.

What a fun image with a cute scalloped border! It's just perfect for spring with all the flowers! Have a wonderful spring :)

Sweet Image on your lovely Spring card, thanks for joining us at MAWTT, xxxxx

Beautiful card and like the scallop die you found, that will be handy!

What a fun image and such a colourful and pretty card. Great idea to buy the scallop edged die cuts....Spring on a card and it has brought a smile to my face x

This is beautiful! We'd love you to enter this in our challenge over at the PD challenge too xx https://polkadoodle.blogspot.com/

Hi Mrs A,
what a very pretty spring card and such a lovely image and design.
Your colouring of that image is wonderful and isn't she the cutest.
That die sound fab and I love the card stock you have used.
Thank you for joining the MAWTT Challenge.
Lots of crafty love. Jenny L. DT
Ps. Thnak you for your lovely card.

Oh! I do love this! I love the card shape, what a good buy! This is definitely Springtime! Thank you for joining us at Try It On Tuesday! Chrisx

Valery Anne, what a cute card and great idea to use a stitched rectangle for your paper piercing. Thanks for joining the TGIF Challenge this week!

This imagine is very sweet!!!! I LOVE the paper you've used, perfect for springtime!!!! 🌺🌺🌺🌺
Thanks for entering it into the spring or fall challenge at Brown Sugar Challenge Blog.
Good luck in the draw and hope you can join us again for our next challenge.
Kisssssssssssssssss

This is just the cutest ever. Love the image and your gorgeous happy papers Valery.

Hi Mrs A. I know I'm a tad late but...
it's a great card, such a cute image and your scallop dies sound such a good buy, they do make a nice shaped card.
Thanks for sharing with us at Try it on Tuesday.
Avril xx

Love the card base & that image is adorable! Thanks for joining me over at Tales From The Craft Room
hugs Jo x

A great spring card - your colors are just fantastic. Thanks so much for joining us this time at the Creative Fingers challenge, elizabeth (DT)

Pretty card. The die sounds like a really good purchase. Thank you for joining in the Anything Goes Challenge at Lil Patch Of Crafty Friends.

What a cute card!
Thank you so much for joining in with our challenge at Country View Challenges last month!
Evelyn xx

This is fabulous, so cute and happy! Thank you so much for joining in with our challenge at Country View Crafts, and I hope you join in with us again this month. Have a very happy week, Sue xx

Great job, thank you for playing along with us at the Colour Crazy Challenge & our sponsor Dr Dig, good luck. Love Jane x