Quack over the Eight!

After last nights debacle so much for a Silent Night. Well, The Doc was out like a light after the first verse but  the ducks were having so much fun and as warm as toast under the duvet that they decided to go onto rendering the full repertoire of 'Lulaby of Broadway'. (most famous version is by Doris Day 1951). One of the darn ducks  was ever so slightly out of tune, not by much but that's all it took!!
I sent today's  lorry load of ducks straight out into the forest. 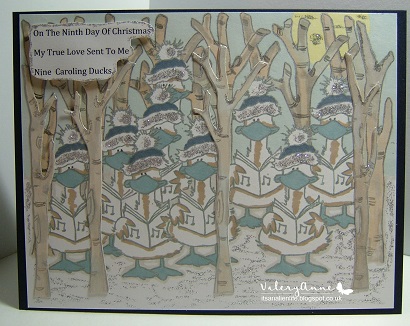 Stamp by Penny Black 'Caroling Ducks' coloured using my Graph'it marker pens on watercolour card. The tree die is by Leane Creatief  Art.nr 45.8930 . I die cut several out and then drew round them to create the background forest. I drew in the detailing freehand using a black lead pencil.   Coloured four of them up to put in the foreground. The sun was made using a 1.5 circle hole punch as a mask. Silver glitter glue on the ducks hats , trees and snow to give a bit of sparkle. ( Getting those ducks to stay still was a nightmare. Unfortunately I didn't manage to lose any.)
I'm already dreading tomorrow.

Hi Mrs A this is a stunning card. There are just so many fabulous ducks it is amazing. Have a great week. Take care. Hugs Jackie

I love this fantastic card Valery Anne, they look very cold out there in the woods.

Mm, ducks in wood should do it, hopefully Mrs A.
Another suggestion is to put the lot on a slow boat to China with plenty of coal to get them there!! Hope the carolling is sweeter tonight and you are out like a light!
Christmas hugs,
Shaz in Oz.x

Oh, this card is hilarious! I like those cute ducks!!
Lia xx

I can't wait to see what you come up wit tomorrow. Your ducks are too funny and so are you! Wonderful card. You really are very creative!

Adorable! Such a fun card and I can almost hear them caroling. Thanks for the cute jokes, I'll share them with my grands. They just roll their eyes when I tell corny jokes now! And you know what - I always loved Doris Day.

Mrs. A your ducks are in the woods aren't you afraid they will get lost there and won't find they way home to you?
Great card...love your duck series...

Clever trick to make the forest - might the ducks not get lost in there?? (ever hopeful I imagine)

A duck shoot in the forest!! Perfect for Boxing Day outing!LOL
Another fun card. Thanks for joining in with us at Stamping Sensations!

Love your ducks sing in the forest,ValeryAnne.Beautiful and cute card.

Great fun Christmas card, thanks for sharing at Fab’n’Funky.

:D Fun post and fun sweet ducks in the forest! Love the delicate colours and the dimension you given with the trees!

Great card! That ought to learn them ducks ;) Thank you for posting in the Merry Little Christmas Challenge!

that duck seals is great, very very versatile, I've seen it on several of your beautiful cards
Congratulations and the best of luck for those challenges

a hug from Chile

Superb, love it and I really am looking forward to tomorrow.

LOL! Your masking and layering is fantastic, ValeryAnne! I have so enjoyed your caroling ducks theme. The sentiment is done perfectly in that vintage style of writing to make it even more fun! hugs, de

Hi Valeryanne i am loving seeing all the gorgeous cards you are making with the ducks,love them,well done.

Oh my goodness, this just makes me smile! Soooo adorable!!! Beautiful ornament card! Love your colors! Thanks for sharing over at ATSM!

Absolutely love this stamp and your cute n happy card.xx

Brilliant card...a choir of ducks singing in the forest...love it!
Have had to scroll down and read all the previous 'ducky' posts to catch up on what I've missed. Your true love has a lot to answer for...
Thank you for the entertainment, and for entering our challenge at Fab'n' Funky this week.
Chris
x

What a fabulous duck card Mrs. A! Great design and colors!

What great card. Funny too with all the ducks. Great stamping
Thank you for joining at Stamping Sensations this month.

So different and funny! Love all the cute ducks. Great to see you in the ATSM gallery. Hope to see you again in 2019. Nandini, DT

Your card realy brings a smile. Great fun card! Thanks for joining our challenge at Stamping Sensations. Marlies

Another flock of the giggles for me.

Great card. Thank you for joining the challenge at Creative Fingers and a Bit More Time to Craft. Hope to see you again next time.

Thanks for joining us at Christmas Crafts All Year Round and all the best for 2019! 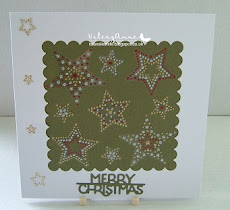